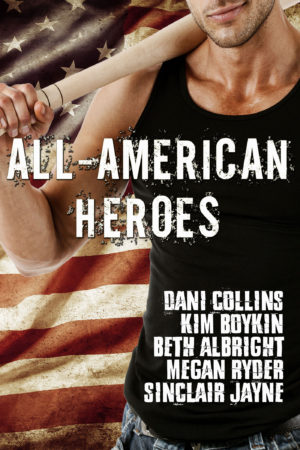 AVAILABLE FOR A LIMITED TIME! Fireworks are sure to fly with this All-American Heroes Set! Five sizzling stories featuring alpha sports heroes that are sure to spice up your summer!

Brought to you by NYTimes, USA Today and national bestselling authors. Buy now and fill your summer reading with the hottest heroes and romances!

Darcy Vance has sunk every cent she has into making Mimosa House the best bed and breakfast in Magnolia Bay. But the key to her success lies in the hands of the Historic Preservation Society run by the Bloom bitches who are embarrassed about their father’s connection to the storied house and they have no intention of validating it with a spot on the society’s registry.

After losing his PGA card, Trent Mauldin has come home to Magnolia Bay to lick his wounds and has no plans to stay. Until he falls for Darcy. Things heat up between the two until Trent’s good intentions to help Darcy go sideways. While Darcy works to save her house, Trent fights to win her back and keep her in Magnolia Bay for good.

The Perfect Score by Beth Albright

Ginny Bloom Hunnicutt is crawling back home to Cottonwood Cove Alabama, her promising CNN news-reporting career in shambles when an on-air flub cost her the job and cost CNN a lawsuit. Putting ego aside, she takes a position at the Chatterbox, the local weekly newspaper run by her mother, the town gossip. What’s a southern belle to do in a crisis but run home to her mama? But when a mysterious hot high school football coach rolls into town, Ginny’s luck begins to change. Seems he has more secrets than a shady politician and Ginny’s determined to dig up the truth, and write the story that will get her career back on track. Everyone knows in a small, southern town, nothing stays private.

But the more she delves into his past, the more she begins to fall for the former college football star. The coach’s star player has some secrets of his own and when Ginny uncovers it all, she must decide if she should reveal everything or follow her heart and protect the people she has grown to care for.

Author Beth Albright weaves a saucy southern tale filled with intrigue, romance and laugh out-loud comedy. From the bright lights of Friday night football to the darkened bedroom of unexpected lovers, it’s a richly layered story with more twists and turns–and mud–than an Alabama back road.

Going All the Way by Megan Ryder

He’s looking for redemption.
After destroying his reputation, Jason Friar is desperate to make a comeback in Major League Baseball. The only team who will have him is the perennial cellar dwellers, the Georgia Knights, who are looking for a leader for their struggling team. With the contract comes a leash, held by a sexy image consultant with whom he had a hot fling…

She’s looking for respect.
After being blamed for the collapse of a political candidate’s campaign, Stacia Kendall needs a new opportunity to prove herself to her father, a prominent and powerful Senator. Her one chance is to redeem the image of Jason Friar and not succumb to the heat simmering between them, a heat she knows so well…

Can Stacia help Jason find the redemption he needs, while protecting her heart?

Hollis Remington is slinking home to San Clemente, California. Needing to hide out at her grandmother’s beach cottage to lick the wounds from her latest professional failure, she’s stunned to find her ex lover and professional surf god, Kadan Carson, lounging in the only bed. Naked. Hollis can’t afford a hotel, and no way will she let her family or friends know she’s broke, but Kadan’s refusing to leave. He does, however, agree to share…

Professional surfer Kadan Carson is recuperating after his third ankle and foot surgery, and while it’s highly possible his professional career may be over on the brink of his most lucrative corporate sponsorship deal, he’s determined to fight the inevitable effects of age, gravity, and injury on his body in private. No fans. No nurses. No distractions. Until Hollis shows up, who has always been one hell of a distraction. Six years after she walked out for the last time accusing him of infidelity, she’s still the one woman he hasn’t been able to exorcise from his heart, head or body. And he doesn’t really want to.

There’s no way Hollis can forgive, but she also can’t forget. Kadan was and is her first and only love. Can she help him to heal without losing her heart again? 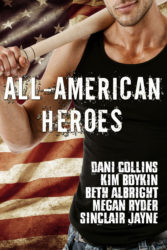 All-American Heroes is currently available in digital format only: 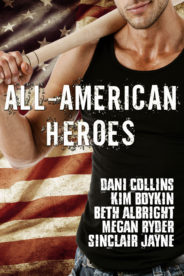 Going All the Way →