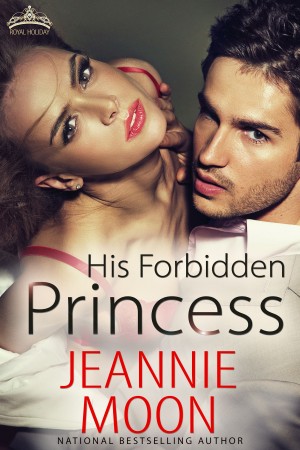 Eight years ago, university student Ian Stuart fell in love with his sweet, beautiful classmate and he’s never forgotten her. Sofie loved Ian with all her heart in return, but she didn’t trust him with one little detail about her life she’d neglected to share.

She was a princess, and they could never be together in the outside world.

Now Crown Princess Sofia is in danger. An insurgent faction in her country has targeted the royal family, and while Sofia is visiting the United States, she is forced to go into hiding. Assigned to protect her is none other than FBI Special Agent Ian Stuart.

Once again Ian and Sofie are in an impossible situation, fighting their feelings for one another, while trying to stay safe. Will their love for each other prove to be the most dangerous game of all?

Yes, it was drizzling with a chill in the April air, but she was warm, tucked against the most extraordinary man—someone so honest and kind, and so grounded in his beliefs she just loved listening to him. Who would have thought that by coming to Cambridge she’d find an American who was so perfect for her?

It was funny how the world worked, how love found you when you least expected it.

Glancing at their joined hands, Sofie imagined what her parents might say about Ian, and she wondered if she could get them to see how good he’d been for her. How he was strong and honest. Kind.

She wondered if how much she loved him would matter to them?

Her parents and her family exerted so much control over her life that she couldn’t imagine them approving of her relationship with the former soldier. Yes, he was brilliant—well educated and honorable. But he wasn’t of her station, and marrying well was all her parents ever wanted for their second child.

“Sofie? What’s wrong?” His voice was deep, and clear, with the slightest New York accent.

“Why do you think something is wrong?” she replied.

“Because you usually talk my ear off and you’ve been very quiet. Is something on your mind?”

What would he do if she just told him the truth? Ian, by the way…

Since meeting him she’d learned to see outside her own bubble. As so often the case growing up the way she did, Sofie was the center of the universe. Everything she did was watched, every want or need was satisfied, and it was all done without much thought to anyone else. Ian changed all that. He helped her see the big picture.

Looking up at him, his profile took her breath away the same as when she saw him for the first time. He was tall, over six feet, and muscular in a lean rather than bulky way. His face was angular, handsome; his eyes were large and dark. Always seemingly touched by a bit of gold, his hair and skin had a warm quality. But it was the way he touched her, held her, kissed her that had changed the way Sofie saw herself.

She wasn’t a sheltered girl, but a woman. At twenty-one, she was ready to grow up.

He stopped and turned her into his powerful arms. “Anything.”

It was now or never. He was all she’d ever wanted in a man, every dream she’d ever had about her knight in shining armor.

His thumb skimmed over her cheek. It was such a simple gesture, but Sofie’s heart fluttered and jumped wildly. Finally, she mustered up the nerve to tell him what she wanted. “I want…” Lord help her, she was nervous. “I want you to make love to me.”

His eyes locked on hers and everything around them, the breeze, the rain, the noise from the pub nearby, seemed to quiet immediately. “Are you sure?”

“I’ve never been more certain. You’ve been so patient with me, so sweet. I know it hasn’t been easy.” She glanced around, then rising on her toes, she kissed him. “Let’s go to your flat. I want to be with you.”

He hadn’t moved except to pull her close, but it seemed just a split second and his hands caught her head and his mouth came down on hers in a kiss the likes of which they’d never shared. This was hot, hungry and a little dangerous. But Sofie gave into it when his tongue slipped into her mouth, a soft moan escaped from her throat surprising both of them.

“I don’t know what to do,” she heard herself say.

“I’ll take care of you.” His lips pressed into her temples and Ian’s warm breath filled her with comfort, strength. She trusted him, above all else, Sofie trusted him.

The short distance to his flat through the park near Christ College seemed endless. The waiting interminable. Now that she’d decided, being with him was the only thing that mattered.

Once they’d climbed the three flights of stairs and he’d closed and locked the heavy wood door, Sofie launched herself into his arms.

“Come here.” Taking her hand, Ian led her through the living area of his flat. It wasn’t big, but it was neat and beautifully appointed, with large windows she expected made the place gorgeous on a sunny day. It was much nicer than she expected, but over the past few months, she’d learned that Ian was full of surprises. They entered his bedroom, which again, was surprisingly neat, and another set of large windows dominated one wall, looking out on Christ’s Pieces. He sat on the blue comforter covering the bed, pulling her down next to him. They stretched out and Ian made sure Sofie was tucked securely into his side.

Snuggling in, his body was hard, strong, and maybe that should have unnerved her, but never had she felt this protected. She felt safe with him. Totally safe.

“You have to know you can always tell me to stop. I won’t push; this is all up to you.”

He raised himself over her and, not being able to resist, Sofie reached out and touched Ian’s face. He smiled and her whole world lit up. “I love you, Sofie. I’ve never said that to anyone, and I won’t say it to anyone ever again. You’re it for me.”

“Oh, Ian, I love you, too. But you need to know some things about me, about my family.”

“You can tell me anything.” His lips touched hers and everything heated up. At the same time, his hand travelled up her side, gently caressing the length of her body. Warmer still.

Sofie gave in to the sensations that bloomed at each touch. With great care, Ian drew her sweater over her head, her jeans down her legs and once she was on his bed in only a bra and panties, Ian took a breath. “God, you are so beautiful. I can’t believe you’re with me.” Ian rained kisses over her face and neck causing her to shiver. Pulling the covers back, Ian tucked her under the big comforter, finally stripped off his own jeans and shirt before joining her.

Twining her arms around Ian’s neck, she knew this was exactly where she wanted to be. “I won’t want you to stop. I want you, Ian. I want you so much.”

His searing kiss was the last thing she remembered as their skin made contact, and Ian brought Sofie to a whole new world.

His Forbidden Princess is available in the following formats: 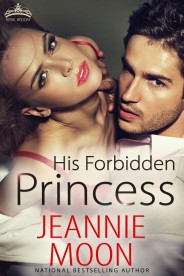 Did you know that His Forbidden Princess and many titles are available digitally from Tule's own bookstore? Check it out!