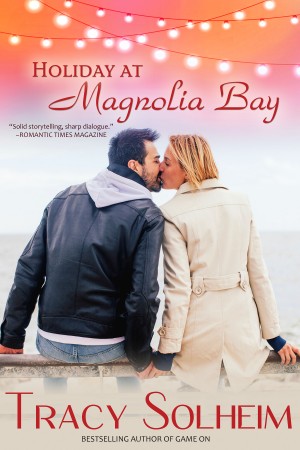 After a mission goes terribly wrong, ending in the death of a teammate, Navy Seal, Drew Lanham, is forced to take a leave from active-duty. Retreating to his godmother’s beach house in coastal Magnolia Bay, Drew plans to spend the three weeks R&R licking his wounds and catching some rays while the nightmares from his failed op fade. The last thing he wants to do is mingle with the locals. What he doesn’t count on is an early morning encounter with a goddess rising from the sea. His interest is piqued and his body put on alert when he finds out that same woman may or may not be after his godmother’s money.

Marine biologist, Jenna Huntley, has been searching her whole life for a place to call home and Magnolia Bay is that place. Unfortunately, she’s underutilizing her education giving tours at the town’s turtle rescue center. With the help of an octogenarian patroness, she maps out a proposal to develop a turtle hatchery on-site. Everything is going as planned until the older woman’s godson arrives. Suddenly, nothing is as it seems and Jenna’s future is hanging in the balance, with a sexy warrior pulling all the strings. Her natural tendency is to help the damaged hero, but she’s sworn off letting military men in her life ever again.

Will Drew and Jenna be able to put their pasts behind them and learn to trust their hearts long enough to enjoy their Holiday at Magnolia Bay?

“Hey,” Jenna’s soft voice permeated the fog of emotion threatening to overwhelm him. It’s only a damn turtle, he told himself, trying to regain his composure and not embarrass himself further. Her hand was on his back, gently rubbing between his shoulder blades.

Except he wasn’t, and he was scared shitless he’d never be okay again. She kept rubbing, and he felt like a total pervert as his heart slowed down and the rest of his body revved up. His buddies were right; sex was definitely the answer to his problems. All he needed to do was convince a certain goddess of the turtles to play along. Once he was right in the head again—both of them—his nightmares would be over, and he could get back to duty and the life he was best suited for.

He glanced over at Jenna. Concern clouded her eyes, but her hand never ceased its confident stroking.

“What can I do to help you,” she asked, her lips hypnotizing him as much as her rhythmic back rub. “My father is in the military, so I’m not a stranger to what combat can do to a person.”

Yeah, but did she know what her touch was doing to him? Or where he wanted those sinful lips to go? He needed to get both of them out of there before he did something stupid. Like take her right there in the sand.

“Drew, talk to me,” she pleaded as her hand slid over his back. “Tell me what to do.”

Ignoring the warning bells going off in his head, he reached out and cupped a sandy hand behind her neck pulling her in closer. The hand on his back stilled, but Jenna didn’t resist him, leaning in until her mouth was a fraction away from his. “You could kiss me,” he said, trying not to sound as desperate as he felt.

She arched a delicate eyebrow as their breath mingled in the salty night air.

“Think of it as your patriotic duty, seeing how you’re a military brat,” he urged her.

“Seriously? How many times have you used that line?

Drew took it as a very good sign that she was still sitting so close to him with her hand now tangled in his hood. “Actually, you’re the first. Most women don’t take a lot of persuading once they see the uniform.”

She did roll her eyes at that but they were the only part of her that moved. “I don’t think I can kiss you after that sap,” those luscious lips finally said.

“No problem, I’ll do all the kissing. You just sit back and enjoy the ride.”

Holiday at Magnolia Bay is available in the following formats: 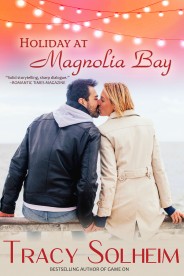 Did you know that Holiday at Magnolia Bay and many titles are available digitally from Tule's own bookstore? Check it out!