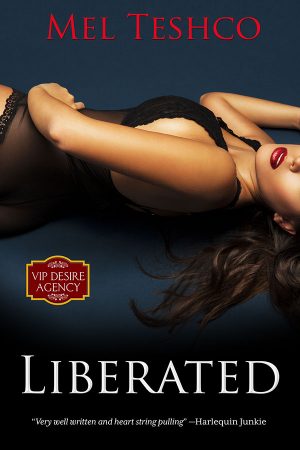 Eloise Chand isn’t just any woman, she’s also Savannah, stunning call girl. But it doesn’t stop unprofessional thoughts about her favorite clients, Saxon and Julian. She knows she’s in trouble. She doesn’t want her career destroyed by personal attraction. She’s a business woman first and foremost, and the Wolfe brothers aren’t part of her career plan.

Adopted brothers, Saxon and Julian, share more than just their billion dollar real estate development business. But never in their wildest dreams did they expect to fall for the same call girl. She’s a woman whose hot-blooded sexuality and independence stirs something deep in them both. That she’s beyond willing to share the same bed with them is just a bonus they want to further explore.

But how do they permanently attain the one woman who just might be unattainable?

Savannah took one last look at the middle-aged man snoring softly on the rumpled hotel bed, noting his taut face was now smoothed free of any stress, his mouth curled into a relaxed line.

Her own mouth tipped into a smile. She prided herself on keeping a client’s often too demanding lifestyle at bay. She was every man’s fantasy, a woman who could, for a short time at least, make her clients forget all about the harsher realities of life.

When her client woke tomorrow morning, he’d be returning to his courtroom dramas, at least until his next appointment with Savannah, his favorite call girl.

She gathered up her tip that consisted of a generous wad of hundred-dollar bills he’d left for her on the bedside table. Her client was a highly-paid judge and could well afford a night away from his stress-induced life.

Her smile died just a little at seeing the gold band on his finger. It was the one part of her profession she didn’t like. Many of her clients were married men whose wives couldn’t give them the sexual fantasies they obviously craved. Then again, it was probably a small price to pay for the judge’s wife to turn a blind eye to any indiscretions.

Not that Savannah was in a position to judge anyone… least of all herself.

A lump formed in her throat when she recalled the poverty she and her family had lived in. That same poverty had forced her Nepalese parents to give her up at sixteen to an arranged marriage. It had been one less belly to feed, even though they’d had to borrow money for the dowry to give to the groom and his family.

She shuddered. Her older husband might have had the means to feed her, but she would have chosen an empty stomach any day over the sadistic violence he’d inflicted daily.

Yet she’d been the one who’d shamed and dishonored her family by running away to make a new life for herself in Australia. The tightness in her chest eased. She’d more than made it up to her family with the funds she sent them every month.

She tucked tonight’s bonus into the apron’s front pocket of her black-and-white maid’s outfit, forcing the bleak memories of her past to the back of her mind where they belonged. Then, drawing in a steadying breath, she stepped past a mirrored wardrobe on the way to the front door.

She lifted a hand to pat her sleekly groomed, midnight-colored hair, noting her long-lashed, smudge-proof mascara, her crimson lipstick, and the rest of her made-up face that had sent her client into raptures was still all in place.

But it was her lackluster, dark-brown eyes that gave her pause. Her stare held not even a glint of emotion.

Damn. When had sex become so… lackluster?

It’s never dull when you’re with the Wolfe brothers.

A pity the brothers were also to blame for her present lack of passion. She swallowed convulsively. Acknowledging the truth didn’t come easy. She’d worked hard at her profession, ensured she was at the top of her game. And now her favorite clients, Saxon and Julian Wolfe, threatened it all.

She squeezed her eyes closed and counted slowly to three. She wouldn’t allow these stupid thoughts to destroy her composure. Except when she flicked open her lashes and her same hollow eyes stared back, the trickle of anxiety within threatened to turn into a flood.

She seldom felt anything but satisfaction at seeing a client writhe in ecstasy. But the emptiness growing inside was a serious risk to everything she’d worked so damn hard for.

She’d always enjoyed her work, but she realized now the more she saw Julian and Saxon, the more her emotions were becoming tangled with doubts. And the more she questioned what really made her happy.

She snapped off the overhead light and opened the front door, her thoughts still on the brothers. They always made sure they left her lipstick smudged and her hair tangled. And although dressing her up as a maid or a policewoman or any other fantasy figure wasn’t their thing, sex with a beautiful woman most certainly was.

The adopted brothers might have different biological parents, but they shared more than just their billion-dollar real estate development business. They loved to fuck, and they most certainly loved to fuck her.

She shut the door behind her, then leaned her head against the door and closed her eyes again with a ragged sigh. Regardless of her concerns that she was breaking her one rule to never get close to a client, she wouldn’t be quitting her addiction to the Wolfe brothers anytime soon.

An elevator dinged. She didn’t hear anyone step into the corridor of the fourth floor, but her prickling skin and a rush of heat made her snap her eyes open. Her breath caught in her throat, her knees going weak at seeing the tall, powerful man leaning against the far wall.

“Saxon.” She breathed out his name.

“Savannah,” he said huskily in return, his heated, gun-metal stare sweeping over her and making her nipples peak even as she shivered with awareness.

Damn, did any man look better in a worn pair of jeans and a black T-shirt? She lifted her chin. “What are you doing here?”

It was almost involuntary to glance around the lighted corridor to see if he was alone. An unsettling feeling of disappointment sank in even as she shook her head and added, “You can’t follow me. If Maisey hears about this, you’ll be struck off my client list.”

His being here was not okay. No man was allowed to intrude in business hours unless they were a client who’d paid for the privilege of her time. Maisey ran the VIP Desire Agency with an iron fist. She wouldn’t put up with any transgressions, especially since she’d recently lost three of her best call girls to former clients.

Brandy, Scarlet, and Tiffany, otherwise known as Kate, Claire, and Natalie, had all found the loves of their lives. And Savannah was thrilled her best friends in the world had gotten out of an industry that could so easily corrode away self-worth.

But it didn’t mean the Wolfe brothers could be the loves of her life. Yes, they took up way too much space in her head, but she’d learned to stand on her own two feet and make the most of a situation, and she refused to give another man the power to take away her freedom and independence.

Bad enough she was second-guessing everything about her career choice. She wouldn’t hand them even more control.

Saxon stepped toward her, the dark brown of his hair burnished with glints of blond from his work in construction that often saw him outdoors. Even his stubble appeared blond against his sun-bronzed skin. “Maisey won’t know unless you tell her, and we both know you won’t do that.”

Savannah bit back a sharp retort. There was no point lying, he knew better, just as Julian would have if he’d been here.

The unyielding set of Saxon’s jaw was offset by the glint in his stare. “And you know why I’m here Savannah, but we won’t beg, not even for you.”

Of course they wouldn’t. The brothers were notoriously proud, verging on arrogant. But they had every right to be. Their real estate development business hadn’t become a huge success through luck and halfhearted work ethics. The brothers had worked their asses off and had earned every penny of their success.

“Where is Julian?” she asked weakly.

“He’s working late again.” His eyes glittered. “He didn’t want to see you with another client.”

Of course he didn’t. Otherwise, she had no doubt it would have been Julian who’d be here trying to talk apparent sense into her. Julian with his eloquent speeches and persuasive charm. A master in the boardroom as well as the bedroom.

Not that Saxon lacked in any way. She shivered. He wasn’t satisfied until she was satisfied. And although he was a man of few words, his blunt candor often put even more chinks in her armor.

She pressed the heel of her hand to her brow, suddenly hot and more than a bit anxious. The Wolfe brothers might be perfect for her body, but they weren’t good for her mind. She’d never before questioned her career choice and now she felt like she was all but backed into a corner with no way out. “You shouldn’t have come here either, Saxon.”

His eyes darkened. “We mightn’t beg, but we’ll never give up on you, Savannah. You want us too, despite your denial.”

Need and protest crawled through her in equal measure. Then he stilled in front of her, tall and forbidding. Her throat convulsed. Damn, he’d positively loom over her if it wasn’t for her heels.

He braced his legs apart so he was closer to eye level, before he leaned forward, spreading his hands either side of the door behind her, his taut body effectively blocking any escape. And yet it wasn’t fear that ratcheted up her heartbeat; it was adrenaline-fueled excitement and anticipation.

Saxon dropped his head lower, trailing his lips across her lobe even as he murmured, “We want you, Savannah. Permanently. Tell me what we need to do to make you ours.”

She squeezed her eyes closed, her breath hissing out even as his sandalwood scent filled her senses. She’d been at the receiving end of Saxon’s body enough times now to know better than to fight their physical attraction. But she’d never give in, never lose her independence or allow any man to control her.

She’d escaped Nepal because of a man. Her breath hitched as the brutal memories again threatened to surface. She pushed them back. Her core beliefs hadn’t changed. She wouldn’t give away her rights to another man ever again.

Her lashes fluttered apart and she tilted back her head to look into the intensity of Saxon’s stare. “I’ve already given you and Julian my answer,” she whispered hoarsely. “I don’t belong to anyone.”

He shook his head, his expression intractable. “Whether you admit it or not, you do belong to us, Savannah. No one else will ever give you what we can.” He cupped her face with a hand, and she forcibly restrained herself from leaning into his clasp. She’d always loved his rough, callused hands that revealed his hardworking lifestyle.

She shivered. Although Julian’s hands were smoother, they were no less masterful.

“Tomorrow night, at least, you’re ours.” His words were a thick growl, making her bones turn to liquid and heat pool deep in her womb. “And don’t imagine for a second we won’t do everything in our power to change your mind.”

Liberated is currently available in digital format only: 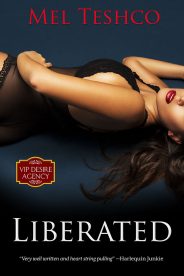 Did you know that Liberated and many titles are available digitally from Tule's own bookstore? Check it out!