Nine days to build a future…

Pepper Mackillop is no soft touch – but try telling her townspeople that. She’s only been home a week and is facing so many problems she’s numbered them to keep track. Her goal is to help rejuvenate her economically rundown hometown of Reckless in Calamity Valley, Texas, but between the town’s unrealistic expectations and the underhanded developers snooping around, she’s challenged every which way. Then Jack Shepperd comes home.

Prodigal son Jack is forced to return home to his family ranch when his uncle decides to retire. He has nine days to close down the ranch and pay a debt to Pepper’s grandmother. A debt that will keep him all but glued to Pepper’s side. Pep is the most captivating, spirited, headstrong woman he’s ever met. Years ago, she broke his heart. What are the chances of a clean getaway this time around?

It was a Thursday and the first day of summer. June had always been a great month in Calamity Valley in the panhandle. Not that it wasn’t good anywhere else in Texas, but this was home.

Pepper Mackillop inhaled the rustic ambience of Reckless as she stepped out of her cabin, squinting as the sun hit the porch, its rays reflecting off the wind chime of old silver flatware she’d hung from the rafters.

“Not a thing,” she called to Noah, the leader of a group of young men who were fondly called the techno-geeks, as he skidded the front wheel of his bicycle to a halt in front of her cabin. “And I spent all night waiting for it!” She grinned as she pulled a chocolate-covered caramel bar from the back pocket of her overalls then threw it to him.

“Sure you can spare one?” he asked, with a laugh.

She ought to give up the junk food. It wasn’t a good look for her planned gourmet food business, but knowing she hadn’t cooked it, baked it, steamed it, or strained it made junk food secretively desirable.

“What’s this?” Mr. Frye asked, halting on the way to his cabin at the end of a row of seven. “Has something happened overnight?”

“Sorry, Mr. Frye. Not a darned thing, except that I slept exceptionally well.”

Mr. Frye was the town’s yodeler, and he also made quilts. People generally preferred his quilts to his yodeling.

Three more town residents stopped on the street and glanced at her expectantly. It had become a daily ritual to ask if she’d experienced anything unnatural, untoward, or downright spooky.

The constant attention from her townspeople was getting a little annoying, but she couldn’t blame them. She was the granddaughter of Mad Aurora, the town’s soothsayer. She was the grandniece of Aurora’s sisters, Crazy Alice and Wild Ava, who lived in the neighboring towns of Hopeless and Surrender. They were all soothsayers.

Pepper was supposed to be one too, but she didn’t hold any score with the notion.

Her cousins, Molly and Lauren, on the other hand, now had the Mackillop gift—in varying degrees of discovery, but that didn’t stop them going on and on about it.

“The gift is famous all around the valley since Hopeless and Surrender got up and running,” Mr. Frye said. “And our town has nothing.”

And it wasn’t going to get anything. Not of the mystical, oracle kind. Not from Pepper.

“Give her a chance,” Noah said. “She’s only been home ten days.”

“You’re welcome. But don’t forget we’re all watching you.”

As if she hadn’t noticed…

What everyone needed to do was put their focus on rejuvenating the town and understand she hadn’t experienced a crumb of the Mackillop ability and never would. No predictions, no visions, no telepathic connections, no nothing. It wasn’t going to happen.

“She’s going off to the house again,” Mr. Frye complained. “When she should be here, looking for her gift. It’s the only thing that’ll save this town.”

“I’m not allowed in my house,” Pepper reminded him, ignoring his taunt about the gift. He’d be bringing up the curse next. “Aurora’s being difficult.”

Pepper was living in the cabin she’d rented because her grandmother wouldn’t let her have the key to her inheritance, Daybreak Lodge. This was another little problem. There was no end to them. She had to drive out to the property every day in order to tend her new herb and vegetable plots. If they wanted her to predict something, it would be that, at this rate, her planned new business, Pepper’s Gourmet, wasn’t going to get up and running any time soon.

“Ten days,” Mr. Frye exclaimed, his features crestfallen. “And there isn’t even a man on the horizon.”

“You can’t seriously expect her to marry a man she doesn’t know.”

“Exactly!” Pepper chipped in, giving Noah a nod. Who in their right mind would even go out on a date with a man who’d been mystically sent, let alone marry him?

“There are plenty of them around town,” Mr. Frye said. “Can’t you find one you like?”

Problem number two. According to her soothsaying grandmother, somewhere out there on the street or lurking in one of the few open businesses was a prospective husband. Sent—or about to be sent—by forces she’d prefer not to think about. No doubt some guy who wanted a female for evolvement from mother to girlfriend slavery. If it turned out to be true—and what were the chances—as soon as she saw him she was going to punch him on the nose. She wasn’t going to do just anyone’s washing and cooking.

“They’re just snooping tourists,” Noah said. “Waiting for Pepper to do something spooky.”

Problem number three. The curse that had hung over the valley since the great-grandfathers—commonly known as the GGs—left the great-grandmothers unmarried and pregnant way back in 1938 and cursed all Mackillop females thereafter. Husbandless. Man-less. Homeless. But sometimes shit happened to the best of families.

Her cousins were not only claiming to have found the gift, they’d fallen in love and by doing so had purportedly overcome the curse on themselves and their once-dilapidated towns by defying the GGs.

Everyone thought Pepper had to do the same for the sake of Reckless. Where was the logic? She wasn’t even in any kind of trouble. She hadn’t needed to come home like Molly and Lauren due to personal heartbreak and the need to regroup and start afresh. She’d made the conscious decision to return. Her world was fine and dandy. It was great that her cousins had fallen in love—the continual schmaltz was a bit too much, although each to their own—but couldn’t people see that it was just a natural disaster? They were bound to fall in love; it was the way they were made.

“Love conquers all,” Mr. Frye said. “Molly and Lauren have proved it.”

Pepper intended to get rid of the curse by laughing in its face.

Problem number four. She was the only person in Calamity Valley to see it this way.

“Don’t forget our first rejuvenate Reckless town meeting tomorrow morning,” she told Mr. Frye, Noah, and the half dozen other people who had now come up to her cabin in case something important was being discussed. “Ten a.m. at the Tack & Feed.” She banged her fist on the porch railing. “We’re going to get this town up and running!”

She didn’t know; she’d only been home ten days. People were so demanding. “We’ll be discussing all possibilities,” she said, with an enthusiastic smile. Whatever happened during the rejuvenation, she didn’t want Reckless to lose its affable, settled appeal. They had lots of families and young people. It was what gave the town its friendly characteristic. Everybody got along and made do, never complaining.

“Everyone will have a chance to speak and offer up ideas for businesses or for improvement on what we already have.”

“Ideas are all very well,” Mr. Frye said. “But nothing good is going to happen until you get the Mackillop gift and get rid of the curse and those great-grandfathers.”

Same old, same old. Could they not let up with the curse?

“I promise,” she said, putting a hand to her heart. “If my dead great-grandfather turns up, I’ll kick his ass back to hell.”

The group dispersed, mumbling pronouncements of tragedy and a lifetime of abject poverty until she got married to the mysterious man who’d been sent.

Common sense would prevail. She just had to wait it out.

“I’ll collect the plates later, Mrs. Kenney,” she said, turning to her next-door neighbor, who was sitting at a table on her cabin porch, eating the breakfast Pepper had cooked for her.

“If you’re passing your grandmother’s place,” Mrs. Kenney said, “could you pick up another herbal infusion? I’m almost out of the one she gave me.”

“And don’t worry about what people are saying,” Mrs. Kenney said. “Once you get Reckless organized, we’ll be rushed off our feet trying to keep up with ergonomics and ecommerce, or whatever it’s all called.”

Mrs. Kenney was smart. She and her late husband ran these cabins like a motel years ago, although they hadn’t had any guests for a decade, and even now it was only Pepper and Mr. Frye renting a cabin. But the best thing about Mrs. Kenney was that she never mentioned the damned curse.

Pepper hitched up a shoulder strap on her overalls, turned to the street and caught the eye of a man untying the tonneau cover on his pickup.

He’d been home a week and was only here to help his uncle sort out something on the Shepperd ranch, Nightshade Downs. Hopefully, he’d get it done quickly and push off, and if he started calling her “Reckless Pep” all over again, it didn’t mean the label would stick—all over again.

He gave her a brief nod.

She gave him a semblance of an acknowledging smile.

This had been their usual form of communication since he wrecked her life when she was fourteen and he was sixteen.

“Wrecked” was a slight exaggeration, but it was her prerogative to make any kind of judgment about him she wanted to. Not that she’d seen him for close to six years now. Not since she left town and headed for Phoenix and a new adventure. Phoenix hadn’t provided much more adventure than hard work and study though, so she decided to come home and help get her town up and running the way her cousins had with theirs.

But this wasn’t going according to plan in any way whatsoever. Not only were the townspeople making ridiculous demands of her, to make matters worse, last week her grandmother not only refused to hand over the key to Daybreak Lodge but also told her Jack Shepperd was home and she had to be nice to him. Hence the argument.

No way was she going to be nice to him. If he had troubles, he could sort them out for himself.

Lone Star Defender is currently available in digital format only: 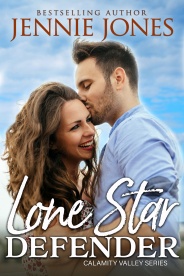 Did you know that Lone Star Defender and many titles are available digitally from Tule's own bookstore? Check it out!