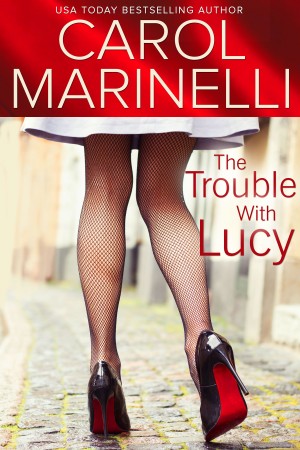 The Trouble with Lucy

The Ex-wife and the Widow…

When he dies, in the most embarrassing of circumstances, the ex-wife and the widow are forced to face not just the other but also their demons. His death somehow frees Gloria and her life finally starts to come together, just as Lucy’s falls apart.

As Lucy’s life spectacularly unravels it is in full view of her nemesis. Gloria is the only one who could possibly understand what Lucy is going through—she was married to the cheating, sex-addicted bastard after all. What goes around comes around and surely Lucy deserves every moment of her come-uppance? She feels no sympathy or pity for Lucy.

I’ve tried to forgive him.

For selfish reasons perhaps, but apparently, you can’t really move on until you forgive the person who hurt you.

And so recently that’s what I’ve been trying to do.

I’m finally ready to move on.

I’ve never even attempted to forgive Lucy though. I’ve nurtured my hate for her for years. I’ve fuelled it, I’ve sustained it, I’ve deserved it and yet, sitting at the hairdressers and listening to the woman in the next chair telling Jasmine about her husband’s affair, I find myself frowning. Instead of joining in, instead of nodding in furious agreement when she talks about the bitch that ruined her marriage, there is, for the first time, the absence of hate when I think of Lucy.

No one notices but me, of course.

I stare in the mirror and I am still frowning as I hear them talking. The way this woman describes it, the way I described it perhaps, was that there I was in the midst of living happily ever after when along came this woman and took my perfectly content husband, tied him to the bed and had sex with him.

Not quite, but possibly you get my drift.

The woman next to me wouldn’t.

Just a few months ago I wouldn’t have got it either.

She pays and leaves and Jasmine comes over and rolls her eyes. ‘They’ll be back together by next week.’

I smile but not on the inside.

We always got back together, till along came Lucy.

I had the bar of my happiness set so low.

‘Right, what are we doing for you today? Just a trim?’

‘No, I’d like to do something about the grey and, also, could you wax my eyebrows and upper lip?’

‘Sure.’ Jasmine smiles and I can tell she’s a bit surprised because I usually just have a trim. ‘Have you got something nice planned for tonight?’

‘No.’ I go a little bit pink when I answer her. ‘I’ve got a date on Monday. Well, just a drink but…’ My voice trails off but Jasmine smiles.

‘Good for you, Gloria! It’s about time you got back out there. How long has it been?’

‘Long enough that I don’t want to answer that question.’

‘So, where did you meet?’ Jasmine asks.

‘At the slimming club I joined.’

We chat away but I’m really only half in on the conversation, instead I am thinking about twelve lost years and how I let myself go.

For a very long while after he left, I didn’t care how I looked.

There was too much other stuff going on.

Then there wasn’t even that excuse.

I let things slide for a very long while.

Way too long in fact.

But, I’m slowly getting there. I started losing weight a few months ago and I finally plucked up the courage to ring my son-in-law, Noel, and I asked him to fix my teeth.

Even though I never expected to, I met someone at my slimming club.

I recognised him from work and we started chatting and it’s all sort of grown from there. Or rather it’s sort of shrunk from there, because Paul’s lost a lot of weight too. He’s been going there for nine months now and, to be honest, I don’t know if I’d have said yes to a date if he’d been as big as he once was. Then again, he probably wouldn’t have asked and, if he had, I wouldn’t have said yes, but for my own reasons…you sort of lose your confidence really, well I did.

It’s starting to come back though. I finally feel ready to get back out there. In fact, I’m looking forward to it. I know now that I deserve to be treated well.

I care about myself again.

After the hairdressers I walk in the house and I look at my hair. It’s back to dark brown but instead of lingering I head over to the computer and I go onto Facebook.

Why am I looking up my ex-husband’s daughter?

She’s my children’s half sister, so I guess there’s your answer but the truth is I’m not really looking to find out more about Charlotte, nor my ex.

I click on an image and there is Lucy, smiling, slender, blonde and beautiful and it’s still there—the absence of hate.

I look at Lucy closely. She’s always been slim but she’s far too thin and there’s also a certain tension to her features that I recognise.

I was always my thinnest when he was cheating. This sort of deal I had with myself that if I lost so many pounds he’d want me again. That if I hadn’t let myself go then he wouldn’t have strayed.

I scroll through Charlotte’s messages.

Mum and Dad are fighting again!!

I wonder if Lucy checks Charlotte’s posts, if she knows that it’s there for all to see that her perfect life isn’t quite that.

Going for a sleepover to Felicity’s tonight

I do a little further searching and it would seem the reason that Charlotte is going for a sleepover tonight is that her parents are going to a work do.

My stomach tightens as I remember those nights.

Oh, my daughters think they invented sex, that I haven’t a clue. They would die if they knew what some of those work do’s entailed, the stuff that I put myself through in an attempt to hold onto my marriage.

I was boring apparently because I didn’t want it up the bum.

Tears sting my eyes as I remember Greg, the Managing Director and his wife, Shirley. I start to really cry as I remember the humiliation of a foursome, and partner swapping at the end of those work nights.

It was the sort of thing my husband liked.

He put me through hell, my marriage really was a death by a thousand cuts but at the time I didn’t even realise he held the knife.

I start to cry, not for me, but for the old me, for the angry, bitter, terrified person that I once was.

There is no lonelier place than a bad marriage.

The façade, the pretence, the futile hoping, the endless promise of change.

I go back through Charlotte’s posts.

He’s away a lot with work, judging by the presents he brings back for Charlotte. He’s coming home later.

I haven’t seen him in years but I can still smell his trouble a mile off.

He’s messing around, cheating again. I know it down to my bones.

Is he doing the same to you?

I’ve fantasised about it in fact but now that it’s here, and it is here, that much about him I know…

I don’t hate her anymore, in fact I actually hurt for her.

I pity her, perhaps?

I turn off the computer and go and make a drink. I’m not going to look anymore, I don’t want to know what’s going on in their lives.

Except, the real truth is, I do…

The Trouble with Lucy is currently available in digital format only: 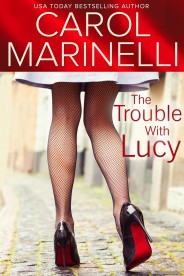 Did you know that The Trouble with Lucy and many titles are available digitally from Tule's own bookstore? Check it out!