Taming of the Sheenans, Book 5 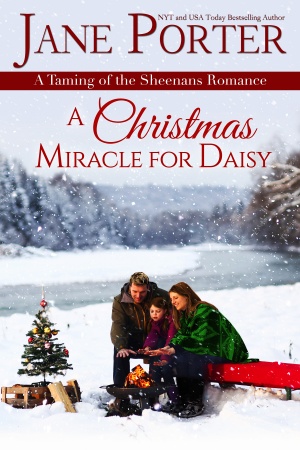 Taming of the Sheenans, Book 5

A Christmas Miracle for Daisy

Media mogul, Cormac Sheenan, had no desire to become a family man, but his newly-adopted goddaughter Daisy has a way of changing all his rules, including him moving back to Marietta, Montana, where life is simpler and he has family nearby

Now four, precocious Daisy strikes up an unlikely friendship with Marietta’s seasonal Santa Claus, and believes he’s the real thing, even though Cormac points out to her that this jolly old Kris Kringle is renting a room at Bramble House, not living at the North Pole. Daisy’s not worried, she’s made her Christmas wish for ‘a new mommy ‘ loud and clear – and she’s got the perfect candidate in mind.

Cormac is livid with ole fake Santa. He’s not at all ready to settle down, and he’s definitely not getting back together with his old flame Whitney Alder, so Santa can stop playing playing the whimisical match-maker… besides, it’d take a miracle to make him fall in love.

“Look.” Her voice was soft and reverent.

Cormac opened his eyes, glanced down at Daisy and then followed her gaze. He immediately understood her wonder.

On the aisle across from them sat a big, white-bearded man with a big round belly. He had round cheeks to match his belly, and thick white hair that curled a bit around his forehead and nape. Swap the bearded man’s plaid flannel shirt and khaki trousers for a red wool suit and he’d look just like Santa Claus.

“Daddy,” she breathed again. “Do you know who that is?”

Cormac was so damn tired he could barely see straight but the awe in Daisy’s voice made the corner of his mouth lift. Despite all the tragedy in her life, she was still so innocent and full of hope and joy.

“Who do you think it is?” he answered.

She looked up at him rather indignant. “You don’t know?”

“I just wondered if you knew.”

“Yes. It’s Santa.” She leaned forward in her seat, studying him. “Where do you think he’s going?”

Cormac closed his eyes, settling back in his seat. “Bozeman.”

“Me, too.” He opened an eye. “This plane is going to Bozeman, Montana. Which means he’s going, too.”

“Why is he flying in a plane? Why isn’t he using reindeer?”

“Maybe his reindeer are on vacation. Or maybe he’s just more comfortable in an airplane than in an open sleigh. Montana is cold this time of year. There will probably be snow on the ground.”

She made a scoffing sound. “He lives at the North Pole. Santa and the reindeer are used to cold. They live in snow.” She leaned as far forward as she could and lifted her hand, just barely wiggling her fingers.

Cormac suppressed a groan. It was one thing to stare at the old man, but to wave at him? “Don’t,” he said, pressing her hand down. “Leave him be.”

“Why? He loves children.”

“I know. But he’s Jesus’ helper. He brings gifts to kids who are good and loving.” Daisy gave Cormac a disdainful look. “And he’s going to bring you nothing because you’re not being nice.”

Cormac turned his head and indeed, the white-bearded, red-cheeked, heavyset older man was smiling at Daisy and lifting his hand in acknowledgement as if he were the real thing.

Cormac struggled to hide his irritation. He could understand why Daisy was enthralled—a child’s innocence and imagination and all that—but the old guy, he should know better. He didn’t need to encourage Daisy.

And just then the seatbelt sign turned off. Daisy shot Cormac a triumphant glance. “It’s off now!” She unfastened her seatbelt and tried to slide from her seat.

Cormac put out a hand to stop her. “Daisy.”

“I just want to know why he’s going to Montana.”

He counted to five, and then to ten. “Why don’t we let him be? It’s a long flight and I’m sure he’d like to just close his eyes and relax. In fact, why don’t we close our eyes, too, and get some sleep so that we arrive in Bozeman rested—” he broke off as he felt her small body shudder.

“Daisy?” He lifted her chin; tears were falling. “Why are you crying?”

“Because I need to tell him what I want for Christmas and you won’t let me.”

“How do we even know he’s the real Santa? Maybe he’s just an elf—”

“He’s not an elf! He’s Santa Claus. Look at him.” She jabbed a finger in the old man’s direction. “He has blue eyes and pink cheeks and a big white beard.”

“Then where is his red suit?”

“At the North Pole with the reindeer!” Daisy was losing patience. “Now, will you please let me talk to him?”

Cormac held his breath as Daisy slipped past his legs and stepped into the aisle to stand next to the old man’s side.

The man’s blue eyes twinkled at her. “Hello.”

“I’m good.” She hesitated and her smile faded, her expression growing serious. “I need to tell you something.”

“I’m all ears,” he said, leaning towards her.

Daisy stood on tiptoe and cupping her hand near her mouth, whispered in his ear.

“I see,” the old man said after a moment.

Daisy whispered something else in his ear.

The old man looked thoughtfully at Daisy, then Cormac, and back to Daisy again. “We will see what we can do.”

“Thank you, Santa.” She kissed his cheek and then scooted past Cormac’s knees to take her seat.

“I told him,” she said smugly, buckling her seatbelt. “I told him what I wanted, and he’s going to see what he can do.”

“And what did you ask him for?”

“Daisy, honey, he didn’t promise anything. He just said he’d see what he could do.”

A Christmas Miracle for Daisy is available in the following formats: 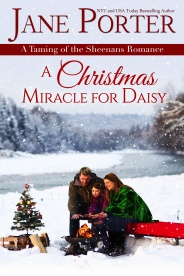 Did you know that A Christmas Miracle for Daisy and many titles are available digitally from Tule's own bookstore? Check it out!