After loving and losing a soldier once, Isabella Knowles made a vow: No more military men. She’s rebuilt her life and has a classroom full of fifth graders to love, which is more than enough even though her father doesn’t agree. When he sets her up on a blind date, she only goes to humor him — never dreaming that the man she meets will tempt her to break her one rule.

In theory, Ethan Masters is not opposed to the wife, kids and house with a white picket fence. But he loves his career as a K-9 handler in the Air Force, and a dream promotion dangles before him like dog tags. While contemplating his future, he accepts a drunken bet for a blind date, never dreaming that the captivating woman fits perfectly into his ideal, all-American dream. Only one problem. She’s gun-shy about all things military.

Can Ethan prove to Isabella love is worth the risk?

An alarm blared, loud and obnoxious, the second Isabella Knowles walked out of the clothes shop. She froze, glanced over her shoulder, and saw the store assistant marching toward her.

Reaching into her handbag, she rummaged for the receipt. No way was she going to be accused of stealing when she’d paid for the items in the bag fair and square.

Before the girl could reach her, movement outside of the shop registered with her. People were dashing down the mall, not in an I need the bathroom kind of way but more in the get me the hell out of here way.

“Ma’am.” The assistant tapped her on the shoulder. “Can you please move? I need to secure the shop.”

“Attention, shoppers,” a disembodied voice crackled around the store, echoing in the mall. “Due to unforeseen circumstances, we are evacuating the mall. Shoppers, please make your way to the closest exit in an orderly fashion. Thank you.”

The siren fired up again, and Isabella choked back a laugh and muttered, “I’ll make my way to the nearest exit in an orderly fashion. Can’t guarantee everyone else will.”

“Ma’am, you heard the announcement, can you please leave the shop?” The assistant’s voice had gone from semi-polite to downright rude.

“Sure, but will you girls be okay getting out?” They’d done plenty of fire drills at school; a cool head made things a lot easier for everyone. Others didn’t feel this way so much, as evidenced by the stampede in front of the shop.

Isabella blew out a long breath and shrugged. Fine, they didn’t need her help. Making sure to pop her car keys into her pocket before exiting the store, Isabella made her way out into the crowd and was immediately swept up in the wave of people.

She weaved her way through the horde to get to the side of the rush where it wasn’t so chaotic and she didn’t fear getting stomped on.

At the nearest fire escape, a swarm of people all vied to get through the door first. There was a reason why they taught the kids to leave the classroom and schools in a line—less chance of a bottleneck at the exits.

Looking around, she noticed that the crowds were thinning; at least in the parking lot there would be plenty of room for people to spread out. The siren still blared, and if she strained her ears, she was sure she could make out the faint tones of the approaching first responders.

Or wait… no, that sounded like a child crying.

Forgetting everything drummed into her during evacuation training, Isabella spun around and worked her way through the mass of bodies. To her left, she noticed a little boy crying; he looked like one of the second graders from the school where she taught.

“Where the heck are his parents?” she murmured under her breath as she made her way toward him.

Even though everything in her was screaming to get to the little boy, she swiveled to face the person who’d stopped her progress.

“I’m a school teacher, and I see one of my students. He’s alone and I need to get him.”

Standing in front of her was a fine specimen of a man. The cliched phrase tall, dark, and handsome sprang to mind, but the description suited him. His rugged appearance matched his deep voice.

“This child isn’t your responsibility. The authorities will deal with him. You need to be concerned for your own safety.”

Isabella ran her gaze over him, taking in the faded denim jeans he was wearing, the tight T-shirt that molded his broad shoulders and hugged his chest. He definitely wasn’t a store security guard or even a first responder, so she didn’t really need to follow his instructions. If he was a police officer directing her out, she’d listen. But the guy was a complete stranger. Where did he get off telling her what she could and couldn’t do?

“Actually, as someone who is in charge of the child’s education, yes, he is my responsibility. Now if you’ll excuse me, he’s run off and I need to find him.”

She gripped her shopping bags tighter in preparation to brush past him, but he stepped in front of her, blocking her way. “Are you always this stubborn, or is it just my lucky day that you’re being obstinate?” He practically growled at her.

Isabella sucked in a breath. “I don’t know who you are, but you don’t get to talk to me that way. Now please move so I can make sure the little boy is okay.”

“Ma’am, if you go after the boy, you’re only making things more difficult for the men and women trained in these circumstances. For your safety, and the safety of others, I suggest you turn around and exit the mall.” He crossed his arms over his broad chest, giving her the impression of a brick wall.

Who is this guy?

The urge to argue more built inside of her. She’d spent the last few years answering to no one but herself. Unfortunately, she had to admit this stranger was correct. Rationally, it was stupid to go after the boy she’d caught only a glimpse of. All the training she’d completed reiterated not to put yourself in danger.

“Fine.” Without waiting to see his self-satisfied smile, Isabella whirled around, her short skirt floating around her legs in a swish.

By the time she reached the exit, there was no crowd and she made her escape. Cars streamed out of the parking lot. Cars and trucks with flashing lights flooded in. A shiver rippled down her spine. Whatever was going on was serious, and the guy who’d demanded she leave had probably done her a favor.

But no way was she going to admit that to him if she ever saw him again, which was never going to happen.

Blind Date Bet is available in the following formats: 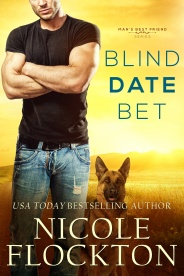 Did you know that Blind Date Bet and many titles are available digitally from Tule's own bookstore? Check it out!