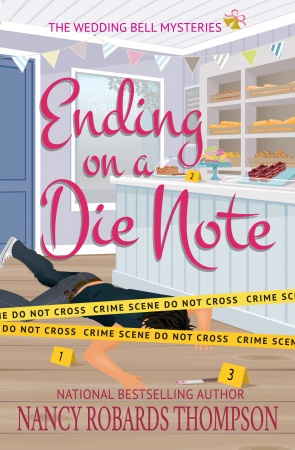 Ending on a Die Note

All the world’s a stage, and all the men and women merely killers…

Everybody’s talking about Hemlock’s annual fall festival’s headliner band, ShakesPierre. Everyone but Tess Harrison, whose breakup with Pierre, the lead singer, left them both singing the blues years ago. And now that Pierre is back, he’s publicly putting his feelings for Tess in the spotlight.

So when Pierre ends up stabbed in the alley outside Tess’s bakery, she’s the number one suspect—especially since she’s famously known for her quality kitchen knives. But the evidence strikes a false note with Maddie and Jenna Bell, who are determined to clear their friend’s name and make sure the real murderer plays…uh, pays for his crime.

The clues lead them out of Hemlock and into danger far outside of Sheriff Jackson Bradley’s jurisdiction. Can Maddie save everyone before the real killer strikes back and Tess goes down for a crime she didn’t commit?

This book will begin shipping October 7, 2021

Order links for Ending on a Die Note coming soon!