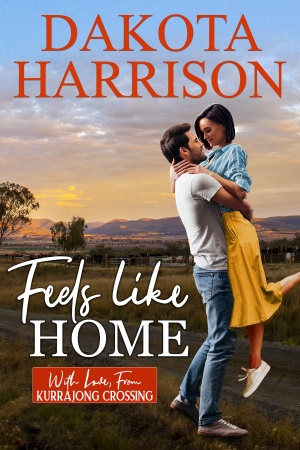 He’s the last person she ever wants to see again…

Zac Hartford swore he’d never return to sleepy Kurrajong Crossing, but after finally making it big in the music business there’s only one thing left on his mind—to ask for forgiveness from the only woman he’s ever loved. If that means stepping foot in the town that turned its back on him, so be it. He’s not there to cause trouble. He’ll simply find Cat, say his piece, and leave.

The last person Catherine Van Alden expects to see in her tiny cupcake shop is Zac—a man she hasn’t seen or spoken to since he destroyed her family and vanished all those years ago. Her desire to think the best of him hasn’t changed a bit, but he’s obviously keeping secrets and she can’t let him into her life again. Not without opening up a world of hurt and feelings best left behind.

When the truth is finally revealed, is Cat strong enough to go after the man she never stopped loving?

Seeing Zac Hart was never easy. He was everywhere. On TV, and all the radio stations.

Staring up from the magazine cover in front of her.

Cat blew on her cupped hands to warm fingers cooled by her early morning walk to work. She’d forgotten her gloves, hadn’t really needed to dig them out of her drawer yet. She’d quickly ducked into the newsagent to grab a copy of the local newspaper as she was running late, only to be blindsided by Zac’s face staring back at her.

She glanced around, grabbed the magazine from the rack, then shook her head at herself. As if anyone around here cared if she picked up some random magazine?

She glanced at the cover in her hands.

“So. You finally made it,” she murmured to the Grammy winner, carefully posed to look like he didn’t have a care in the world.

She knew better. She knew what lay behind those smouldering eyes. Her gut somersaulted with pain and regret, even after all these years. Zac’s tattoo sleeve encompassed his entire left shoulder, and swirled its way down his arm to end at his wrist. Suspenders caressed the taut lines of his bare chest. She was pretty sure her grandfather had never looked so good in a pair. Cat smiled to herself. She was also pretty sure her grandfather had never worn low-cut leather pants, either.

This would be her one small concession. She’d buy the magazine, just this once. She’d resisted all the others, but him being on the cover of the world’s most iconic music magazine was something he’d dreamed of, craved, all those years ago. This one she would cherish.

Cat jumped and slapped the magazine to her chest. She turned as Roland Suffolk nodded her way. She swallowed to clear her suddenly dry throat.

He smiled and continued on his way toward the back of the store, his loud laugh behind her making her jump. A slight smile briefly lifted her mouth. She was certain Roland had a thing for the newsagency owner and the local rumour mill was in agreeance with her on that.

Cat made her way to the counter, smiled and paid, thankful that the cashier was the new girl, and stuffed the magazine into the bowels of her tote. She would read it in private, where she could look and forget for a while, fantasising how her life might have been different.

Cat slid the key into the shopfront door. A familiar hop scratch sounded behind her. She turned to see a black-and-white bird sitting on the boardwalk railing, staring at her with his head cocked to the side.

The little currawong tapped his beak on the broad railing. Cat laughed. “Hang on a second, would you?”

The door lock tumbled with a familiar rumbling click. Cat breathed the scent of fresh, sweet baking deep into her lungs, holding it, letting it fill her soul, as she stepped into her shop.

She grabbed the small container of birdseed from the countertop where she’d left it the night before and stepped back outside across the wide boardwalk, popping the lid of the container as she went. Tipping a small amount into her hand, she placed it carefully onto the railing.

George tilted back his head and let out a low-pitched warble of approval.

Cat left him to it and returned to her shop, shutting the door behind her. The little currawong had his routine down pat. He knew all the times that each shop would open and dutifully sat outside each one as the owners turned up for work, only returning to his nest in the nearby park when his belly was full.

The shop owners didn’t disappoint. The town’s mascot was extremely well looked after.

The massive clock that sat above the coffee machine chimed the hour. Six AM. She shut the door behind her and left the sign reading closed. Technically she didn’t open for another two hours.

Pink, purple, and yellow neon lettering on her wooden window sign flickered to joyous life when she flicked the switch. A small, satisfied smile twisted her lips, as it did every time she saw her sign light up.

Her shop. Her hard-earned money had all gone into this, the life-long dream to one day own her own bakery, stocked entirely with cupcakes of every description.

She knew some people thought of her as a spoiled, poor-little-rich-girl type, a trust-fund baby, but it was far from the truth.

She hit the light switches with a little more vigour than she needed, anger at some people’s assumptions slipping past her usually calm veneer. The centre marble display erupted in a glittering glow from the overhead chandelier. Her new synthetic silver-and-pale-orange flower display sat alone atop it, waiting for the arrival of the cupcakes that were a hit with locals and tourists alike.

Cat walked past the gleaming, crystal-clear cabinets that would house some of today’s offerings, and through the swinging doors into the kitchen.

She’d refused every single offer from her father to help with setting up her business, whether to buy equipment, lease the building, or money. Especially the money. Oh, he had plenty of it, but that wasn’t the point. This was the one thing she could honestly say that was hers, and hers alone. The only thing she’d let him help with was to go through her business plan with her. He’d approved, and had suggested a few tweaks. His approval was something that shouldn’t matter to a grown woman, but it had reinforced her deep-seated belief that she was doing the right thing.

She’d opened her doors almost three years ago. Her thirtieth birthday was her personal deadline to have a positive bottom line.

That birthday was today.

She grinned into the kitchen, the benches full of orderly lines of different-flavoured cupcakes that she’d made the night before. She’d seen the accountant only yesterday, and her little dream was looking good. Great, even. Possibly enough to make even her business-tycoon father crack a smile at the sizeable profits she was returning.

Right, then. Time to frost some cupcakes.

Feels Like Home is available in the following formats: 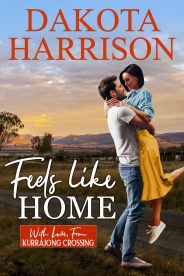 Did you know that Feels Like Home and many titles are available digitally from Tule's own bookstore? Check it out!