The Brands of Montana, Book 1 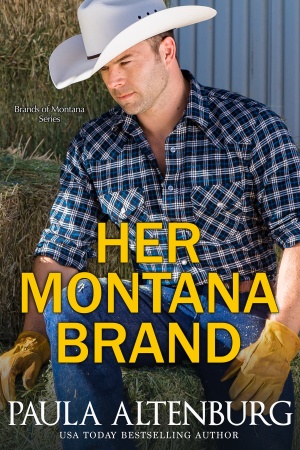 The Brands of Montana, Book 1

Whoever claimed it’s better to have loved and lost has never met Jess Palmer.

Small business owner and metalworks artist Damon Brand finally has his future in sight when his past rattles into town in a broken down car stuffed with designer clothes and sky high heels. The last time he saw Jess, he declared his undying love. She stranded him by the side of the road, taking his boots, pants and the tattered remnants of his heart in return.

It’s not easy to outgrow a wild child reputation, especially one so deserved.

Failed actress Jessica Palmer arrives back in Sweetheart, Montana homeless, destitute, and desperate, hoping to convince her grandfather to let her have her inheritance early so she can make a fresh start. He agrees, but the catch? She has to stay in town for six months and get a job to prove she’s matured. Unfortunately, she might have flamed a few bridges—some more important than others.

With every door that’s slammed shut in her face, Jess grows more determined than ever to prove she’s changed, even if it means she must turn to her first love, Damon, for a job at his gas station. Surely 10 years is enough time for him to forgive and forget…

Jess slid onto a bench in one of the Cherry Pit Diner’s red vinyl booths, and under the Formica table, kicked off her high heels. Her throbbing toes and raw skin thanked her as she ordered a coffee.

While she hadn’t expected the job hunt to be easy, and it was too soon to be discouraged, the reality was far worse than expected.

First thing that morning, she’d driven to a consignment store in Polson on the last of her gas. She’d considered it a test run, and therefore, only took a few things with her so she could learn the ins and outs of bargaining. Her plan was to try out three different stores and compare the experiences. The little she’d gotten for her barely worn clothing and shoes made her want to curl up in a ball of despair. At least it was enough to pay for lunch without having to count out the pennies. She’d also bought some jeans and t-shirts, and a pair of sneakers. She planned to fill her gas tank later on, too.

After lunch, she’d headed back to Cherry Lake and begun knocking on doors. The Montreau Hotel had seemed like a good place to start. Big, elegant, and under renovation, it housed the most upscale restaurant in Cherry Lake. She’d eaten there many times over the years. Waitressing in it for six months wouldn’t be a hardship. The menu had limited options and her memory was excellent. Jess toyed with the napkin dispenser. It turned out the current manager’s memory was pretty good, too. She’d tried out for cheerleading with Jess. Jess had made fun of her weight in front of a few boys from the football team.

But Shanda White’s memory was hardly perfect. She’d forgotten how she’d mocked Jess in English class when Jess stumbled over an oral assignment and mangled a simple pronunciation—maybe because Jess had laughed along with everyone else. Her insides, however, had glowed red-hot with shame. She’d hated that class.

In Shanda’s defense, Jess could look back and admit that making fun of her heavy thighs at cheerleading tryouts in retaliation was a bit like kicking a dog for a transgression committed two days before. Neither one could figure out what they’d done to deserve it. So this time, Jess had gone out of her way to be friendly.

While Shanda, who still had fat legs and no sense of style, had taken far too much pleasure in telling her the restaurant was looking for staff with prior experience.

Now here Jess sat, in the sunny Cherry Pit Diner—a place she’d never entered in all her eighteen years of living here because her mother said it was “common”—nursing bruised feelings and sore feet. The dinner crowd was beginning to arrive and she was taking up valuable real estate. She’d finish her drink, then fill up her gas tank and head back to her grandfather’s.

The bell over the door tinkled. She glanced up automatically just as Damon walked in.

He wasn’t wearing coveralls today, but instead, a sky blue Henley the color of his eyes that showed off every ripped muscle in his broad upper torso. A faded pair of jeans cuddled his thighs. He hadn’t looked like this back in high school.

And he’d already been impressive enough.

She sank lower in her seat, her heart beating too hard, hoping to go unnoticed. She couldn’t say why. Their first awkward meeting was over. It was nothing to her one way or the other if he spotted her now.

Except she’d dealt with enough of her past for one day.

His eyes skimmed over her, paused for a second, then moved on as if her presence weren’t worth registering. He strode to the lunch counter, where the stools were filling up fast.

“A coffee to go,” she heard him say to the pretty waitress behind the counter as he handed her a stainless steel travel mug and a smooth, sexy grin.

That male self-assurance was new. While the Damon she’d known had been well aware of the attention girls gave him, this older, more mature version seemed to know what to do with it. She wondered if he was married. He worked with his hands so the absence of a ring was no real indication. Judging by the waitress’s flirty smile in return, and the way she blushed, Jess would have to guess no. Not that it mattered.

He took the full travel mug from the girl and slid two one-dollar bills across the counter. Then he started for the door. Jess began to breathe easier. Halfway across the room, he suddenly changed direction and headed straight for her booth.

Just like that, she was back in Grade Twelve and the most popular boy in school was paying attention to her. Unfortunately, she’d been the mean girl.

“I see you’re still in town.” He looked at the empty seats around her. “And you’re meeting up with all your old friends.”

It was hard to take offense with his blue eyes sparkling at her that way. He was trying to be funny, not unkind.

That had been her department, not his.

“Now that you’ve shown up, it’s like a high school reunion,” she said.

His eyes crinkled at the corners. “Is this the part where we’re supposed to comment on how much we’ve both changed?”

She rolled the half-empty coffee cup around in her hands. One thing was definitely different about him. He didn’t look at her the same way, anymore. There was no real warmth in those eyes. No sincere admiration. Ten years ago she’d taken him and his friendship for granted. She hadn’t deserved him, and he had to know it. So why had he stopped at her table?

Because, in spite of everything, he felt sorry for her?

Heat clawed at her cheeks. She didn’t want pity.

“I doubt you’ve changed all that much.” She hadn’t meant for that to sound so…abrasive, but polite chitchat wasn’t really her strength. She scrambled to soften her words. “There wasn’t much about you that required any changing.”

“Everyone changes, Jess. People grow up and get smarter. They learn to forgive and forget.” He glanced at his watch, then rapped his knuckles on the Formica table as if to signal their conversation was over. “Have fun while you’re in town.”

He walked away, his broad back weaving a path through the sprinkle of tables in the center of the crowded diner on his way to the door. He paused a few times to speak to some of the other patrons, his handsome face smiling and friendly. He really hadn’t changed. He was as popular as he’d ever been.

Envy pinched Jess’s insides. So did humiliation. He’d taken the high road by stopping at her table to tell her he’d gotten over that night long ago.

That pretty much meant he hadn’t.

The waitress came by to wipe the table and ask if she needed anything else. What she really wanted was for Jess to hurry along, so Jess handed over her almost-empty cup, along with her money and a generous tip she couldn’t really afford.

By the time she’d eased her tired feet into her shoes and gathered her purse, Damon was long gone. Relief chased disappointment. She’d planned to buy gas at his station on her way home and now seemed like a good time. Since he hadn’t been dressed for work, and that was a travel mug he’d had in his hand, there was a good chance he wouldn’t be there.

She tried not to think where he might be heading, instead. What Damon Brand did with his evenings was none of her business. She’d seen to that.

Her Montana Brand is currently available in digital format only: 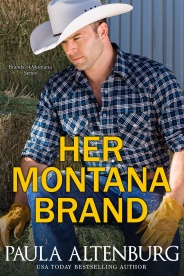 Did you know that Her Montana Brand and many titles are available digitally from Tule's own bookstore? Check it out!