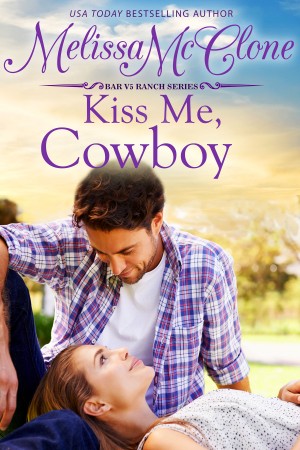 It was one small kiss.
After all, a kiss is just a kiss.
Or is it?

After a passionate and empathetic kiss, dude ranch wranglers, Charlotte “Charlie” Randall and Zack Harris, are out of sorts as they pretend nothing happened. With too many demons to battle, Zack can’t let Charlie get close. But it’s too late, because she’s fallen hat over spurs for the handsome military veteran turned cowboy. Taking a job in another state is the only way to protect her heart and finally move on.

But Zack can’t let her leave, so he concocts a plan to find Charlie a boyfriend–a perfect match–to keep her in Montana. Until he realizes the only cowboy he wants her with is him. But it might be too late. Has Charlie made up her mind to put the kiss in the past and forget the cowboy who rode off with her heart?

Back at the Bar V5, horses put away in their stalls, Zack leaned against the doorway to the barn. A warm breeze carried the familiar smell of cow, horses and dirt. Paradise Valley was God’s country, a land like no other he’d seen. And he’d seen many during his time in the army. He couldn’t imagine anyone wanting to leave this place permanently.

She’d worked at the Bar V5 longer than him. She considered this ranch home the same as him. But something in her tone on the ride back told Zack she’d made a decision.

Not going to happen.

He rested a booted foot against the door jam. Sweat soaked through his T-shirt and dampened his hairline. Dirt covered his jeans. A cold drink and a shower sounded like heaven. But he couldn’t head to the bunkhouse without talking with Charlie first.

He hadn’t understood her going to Colorado this past winter, but she hadn’t traveled much and he knew she was coming back to the Bar V5 so he wasn’t worried. This time would be different.

Ty exited the barn with Dusty, an Australian Cattle Dog at his heels and Onyx, a black barn cat, at his side. He looped a thumb into his jean pocket. “Thought you’d be at the bunkhouse.”

“Something I want to take care of first.”

His friend, who happened to be his boss, gave him a hard, knowing look. “If this has anything to do with Charlie—”

“Something’s calling her to Colorado or pushing her away from here.”

Damn, he couldn’t bring himself to say the words. A mixture of embarrassment and something he couldn’t name.

Ty grinned wryly. “Didn’t think so. Divorced couples get along better than you two.”

“That’s her doing, not mine. I’ve been treating her the same as I did…before.”

Before Charlie kissed him, and he kissed her back.

Zack didn’t regret many things in his life, but he regretted that night with her at the river. He’d been overwrought by grief following Davey’s death. Words coupled with emotion had poured out. He’d opened up like never before.

Charlie had been there to listen and comfort. A touch on the arm led to holding hands. Her kissing him turned into a make-out session. More than one. Unexpected, but what he’d needed. She’d been so caring and kind and loving. So soft and feminine, something he hadn’t expected from the cowgirl who acted like a cowboy most of the time.

He’d wanted more. Her. Until sunrise made him see the light and realize the mistake he’d made by thinking about what he wanted, not his fellow wranglers and what was best for the Bar V5.

Relationships changed group dynamics. Zack had seen that happen during deployments where friendships became stressed and people got hurt. One woman had caused his squad to implode. He didn’t want that to happen at the Bar V5, his home now, his…family. A romance would affect the wranglers in a negative way.

He’d also heard Charlie’s friends talk about her search for the perfect guy. Perfect didn’t describe him. Far from it. She deserved more than a guy like him could give her.

He wasn’t capable of making a commitment to a woman because of his parents. Charlie was a forever type of girl. Any fool could see that. He’d been a fool to think he could have her, even for one night. “If I could take back what happened…”

“But that was over a year ago and can’t be the reason she wants to leave now. All we did was talk and kiss. Hell, she made the first move. No big deal.” But they could have easily made the night into something more, something special. He shook the thought from his head.

“Yeah, you’re right. It’s not like Charlie to hold a grudge,” Ty said. “The horse ranch may have made her a better job offer. Or she could have met a guy in Colorado. Wants to be with him.”

Zack’s stomach clenched. Charlie was pretty, even when she tried downplaying her looks. But she seemed more interested in the livestock, then men. He’d heard talk of dates, random gossip at Grey’s Saloon, but he hadn’t seen her out with a guy. “You think?”

“That would explain her wanting to move there.”

Yeah, more so than anything else, but… “Why wouldn’t she tell us? And why all the waffling?”

“She’s a woman.” Ty reached down and scratched under Onyx’s neck. The cat purred like a John Deere tractor. “One thing I learned raising Rachel is a female’s thought process is different from ours.”

This should be an easier decision to make. Thanks for getting me back on track.

Maybe, but Zack needed to know what Charlie meant by those words. None of his business, he reminded himself. He’d been telling himself that for two months, ever since Ty mentioned Charlie might not stay at the Bar V5. “I’ll keep that in mind.”

“Remember what I said. The decision is hers. Don’t try to change her mind if her heart’s set on leaving.”

As if anything Zack did or said could do that, but in good conscience, he had to try. He’d lost track of his parents, who hadn’t contacted him in over a decade. In jail or dead? Those were the likeliest options for the woman and man he’d called mom and dad. He’d never searched for his parents, afraid of what he might learn. What remained of his army family kept in contact, but spending time together hadn’t happened with them so spread out. He needed to keep his ranch family together. Sure people came and went, but the wranglers had stuck together for the past two and a half years, ever since he’d arrived. And Charlie…

She cared about him, about all of them. Wranglers cared about each other, the way he did for Charlie. She would be happiest at the Bar V5, not with some guy in another state she barely knew.

Now to convince her.

Kiss Me, Cowboy is available in the following formats: 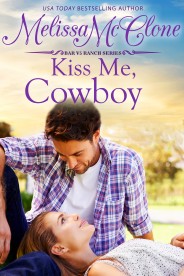 Did you know that Kiss Me, Cowboy and many titles are available digitally from Tule's own bookstore? Check it out!