The Castles of Dallas, Book 2 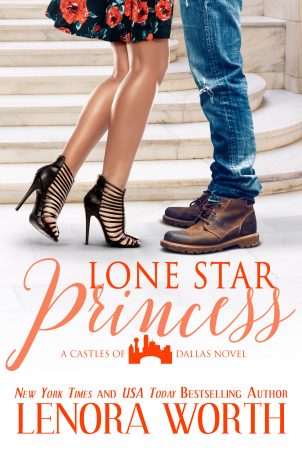 The Castles of Dallas, Book 2

Annabelle Castle is a rebel without a cause…until her stepsister, the head of the glamorous Castle Department store, offers her the chance of a lifetime. Too bad the opportunity to finally play a role in the Castle’s future comes with strings attached—the man who gets under her skin.

Former cop Johnny Darrow is head of security for the Texas-based Castles. He excels at his job and nothing gets to him…except Annabelle. Even as he dragged Annabelle out of many public relations disasters with the paparazzi, he knew there was so much more to her than the headline-grabbing, rich girl. Now that she’s matured and determined to turn over a new leaf, he finds her irresistible. She’s smart, creative, and makes him feel things he hasn’t after a personal tragedy.

When Johnny’s assigned a job as Annabelle’s bodyguard, he must push his feelings aside. Can Johnny keep his focus to protect Annabelle or will his feelings for her put everything at risk?

“Where you headed, princess?”

Annabelle Castle cringed at being called that nickname, especially by this man. Whirling to face the bane of her existence—the new head of security at Castle Department Store, Johnny Darrow—she put on a cool face and gave him one of her I’m-so-bored glares.

“That title is reserved for Eleanor.”

“No, she got promoted to queen. So that makes you the new princess of this Castle.”

“Not ready to wear a tiara?”

Annabelle thought about that image. She did not want to bear that burden. “No, so don’t call me that.” Giving him a daring glance, she said, “I thought you’d stay busier—and out of my way—now that you’ve been promoted.”

Even though he picked at her relentlessly and loved to flirt, Johnny had somehow managed to get her attention when she’d first arrived at Castle’s and worked part time as a teenager. But when she’d come back from college a couple of years ago and given him big hints to take things further, he’d treated her more like a bratty sister than someone he might want to get serious with. Then the one time she’d needed him a few months ago, he’d been away on one of his Johnny adventures. Not available.

Flirty, intriguing, aggravating, and so not available.

Not that she wanted him to be. Annabelle had given up on that adolescent crush. Johnny was like a thorn in her side. She tried to ignore him, but how could she when the man watched over everyone like a superhero?

Hip and handsome with tiger eyes, golden-brown wavy hair, and a bad-boy attitude, he’d been around Castle Department Store for as long as she could remember. He’d worked his way up from a part-time security officer to head of the department, thanks to Eleanor Castle, her sister, giving him a promotion recently. Annabelle had dated a lot of men in the years she’d known Johnny. Why did he seem to be the one who got on her last nerve?

Maybe because he was just not that into her?

“I happen to be working right now,” he retorted. “Your big sister keeps all of us on our toes.”

“I can’t argue with that,” Annabelle said while she took in Johnny’s lightweight gray suit and crisp white shirt. And an Elvis tie. Heartbreak Hotel.

She doubted Johnny had ever been heartbroken. He was too busy being Johnny. She had to admit he did a good job protecting this iconic Dallas department store and all the people who worked here, including Annabelle.

“She’s done a lot around here,” Johnny noted, speaking of Eleanor Castle, the only daughter of Charles and Vivian Castle, and soon to be Mrs. Nico Lamon.

“Are you two fighting?”

She couldn’t tell him that she felt inadequate and like a fraud. Given a new position only because of her powerful sister.

But Annabelle had made great strides in the visual merchandising department. She had to prove to Eleanor she could run with the big dogs.

“But I sense a tad of resentment,” he continued in his pushy way.

“I do resent her. She sent my mother to prison. I have to live with that and the blowback. You’ve seen the press hovering around, trying to get the latest. My life hasn’t been a bed of roses.”

Johnny stopped in the aisle to stare over at her. “You live in a house that looks like a castle, and you’ve been promoted to a management position.”

“True, but … you know me, Johnny. I need something to complain about, right?”

He shot her that look where his dark eyebrow winged up and his eyes narrowed. “How is Caron, anyway?”

“How would you be if you were sitting in a minimum-security prison because you embezzled money and worked in-store with a shoplifting ring?”

His eyes went a soft gold. “Not so hot.”

“Okay then.” She tried to walk away, but he followed. Annabelle went on talking. “I admit I’m glad Eleanor took over. Things are so much better now that the long-lost true heiress to the Castle fortune has returned, but … I’m still adjusting.”

After the Valentine Gala at the store and the ball that followed two weeks later at the estate, Eleanor had hit the ground running to bring Castle’s up to date.

Literally hit the ground running, wearing an expensive pair of red satin Lamon heels while doing it. Eleanor had chased down a jewel thief, adding even more lore to her story. She’d left the shoes behind, which had then started a Cinderella-inspired search for the woman in red.

Eleanor Castle had made a grand entrance back into the world of high fashion and cutthroat retail.

She’d also fallen for Nico Lamon, of the House of Lamon fashion dynasty. Their courtship had involved a pair of shoes and lots of cat-and-mouse flirting until they finally decided they wanted to spend the rest of their lives together. They were getting married in December. Annabelle would be one of her three bridesmaids.

“So you resent her, but you’re glad she’s back? Confused, that’s what you are.”

“You think?” Glancing around while they passed lingerie, she added, “Eleanor has retail in her blood. She’s a good leader, even if she did keep you around.”

Johnny tugged at her dark ponytail, his eyes moving over her black linen sundress. “And she let you stay,” he reminded her. “Not only let you stay but gave you a promotion, too.”

Annabelle made a face. “Yes, now I have a real job and I know how to cut my own meat, too. Could you be any more condescending?”

His smile turned into a frown. “I was trying to give you a compliment.”

Johnny stopped near the big mural in the shoe department, but he wasn’t looking at the mural of Eleanor and her parents that had been painted when Eleanor was a girl. “Did you do that sandal display?”

“I did,” Annabelle said, proud of herself and used to his rapid-fire change of subject.

After the person doing displays had quit, Eleanor had offered Annabelle the position as manager of visual merchandising. Once a slacker, Annabelle now loved coming to work because she got to create all the displays for the entire store. Her ideas were being used in several Castle stores across the South.

She twirled around and held her hands over the full skirt of her dress, her gaze moving from the display to Johnny. “What do you think?”

Johnny’s shrewd gaze moved over her in a slow dance that left her feeling as if they were doing the tango. Then he studied the shoe tree she’d created. She’d fashioned what looked like a real tree with branches jutting out in various lengths, but she’d hung sandals of every color and shape over the boughs, their straps dangling down like vines.

“It’s like flowers blooming except these flowers are all … high-heeled, high-classed, and a bit edgy.” He nudged her with his elbow. “Kind of like you.”

Annabelle scoffed, but her heart did a strange little twist. “Darrow, you’re such a flirt. I bet you get phone numbers from women on every floor.”

“You asked what I thought, and I told you,” he said. “I’d better get going. I have a meeting with Eleanor.”

“So do I,” Annabelle said, wondering what she wanted.

Eleanor kept changing things, adding new employees, firing those who didn’t do their jobs, always upgrading and rearranging. Did she have something else in mind for Annabelle?

“You’re sighing,” Johnny said while they moved through home furnishings and headed up the antique curved stairs that spiraled to the top floor. Somehow, they’d bypassed the elevators. “What’s going on in that head of yours?”

“You’ll never know,” Annabelle replied, thinking Johnny wouldn’t settle down, promotion or not. She wasn’t about to tell him that she liked being creative, nor that she loved being in charge of designing the lavish displays that customers stopped to admire. They took pictures and shared them on social media, which brought in more customers. It pleased Eleanor … and that pleased Annabelle. He’d taunt her with that admission and play on all of her insecurities.

She’d been a rebel for so long she couldn’t admit she had grown up and settled down. Quickly at that. Watching her mother go to prison could do that to anyone. Regardless, Johnny would tease her relentlessly over that confession. He’d never see her as a grown up.

But she had other things to worry about. Like this meeting with her sister. She owed Eleanor a lot, but sometimes the old resentments resurfaced. As did the guilt of not doing more to stop her criminally minded, conniving mother.

I’m trying to make up for that, she reminded herself.

“I’m supposed to be here at nine.” He hit a finger against his watch. “And I’m never late, unlike some people.”

“You’re both on time,” Eleanor said from behind them, her golden hair in a chignon, a cup of coffee from the downstairs café in one hand and a bagel in the other, her leather purse dragging on her arm. “C’mon on in. I need to talk to you both.”

“Together?” they asked, giving each other the eye.

Eleanor turned after Johnny opened the door for her. “Yes, together.”

“Oh, this can’t be good,” Annabelle said, shaking her head. “What have you done now, Johnny?”

“I was about to ask you the same thing,” he retorted, his eyes full of questions. But he gave her wink anyway.

Lone Star Princess is available in the following formats: 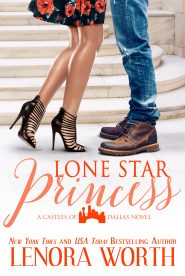 Did you know that Lone Star Princess and many titles are available digitally from Tule's own bookstore? Check it out!