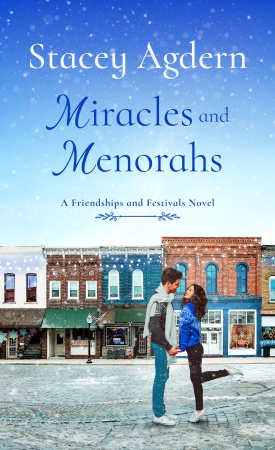 Sarah Goldman loves Hanukkah, and she’s thrilled to be appointed as vice chair of the Hollowville Hanukkah Festival. So when the festival is threatened with cancellation, she comes up with an idea: a new slogan and advertising campaign topped off with a metal menorah large enough to fill the center of town. But even though her heart and dreams are large, the committee’s budget constraints threaten to stop her grand plans right in their tracks.

Famous metal sculptor Isaac Lieberman also loves Hanukkah. But his vision of a perfect Hanukkah isn’t a commercial community event—it’s spending time with family, following age-old traditions. He’s not interested in the festival, no matter how many times his grandmother, his bubbe, asks him to contribute one of his sculptures.

Then Sarah comes tumbling into his life…can she change his mind about more than just the holidays?

One of the worst days in Sarah Goldman’s life to this point started out well.

It was her responsibility as vice chair for the Hollowville Hanukkah festival to attend some of the closed-door meetings of the village Board of Trustees. Usually it was a mere formality—sharing updates, getting good bits of information. And that’s how it began. She was able to tell the board how some village business owners had signed up to advertise in the Hanukkah festival journal, and get a few more commitments.

Except the trustee who had joined the board in a snap election held in the strangest fashion raised his flannel-clad arm, fingers as pale as ice waving back and forth.

“Thank you, Mister Chair, and Miss Goldman. You know,” the trustee had said, “this Hanukkah stuff is wonderful, but I’m feeling like we need a change. If we want to include the whole village, even the whole community, we need to turn this into a ‘holiday’ festival next year. And invite Santa Claus.”

And despite all of the enthusiasm the board of trustees had expressed only seconds before, Hanukkah suddenly became an afterthought, lost in the excitement of plans and thoughts for next year.

It had taken every bit of restraint Sarah had not to scream about how taking away a celebration wasn’t inclusive, not to mention that turning Hollowville’s festival into a carbon cookie-cutter copy of every single ‘holiday’ celebration that existed wasn’t going to make people want to come to Hollowville.

But nobody would listen to her.

So she sat, held her breath, and waited until the meeting with the board of trustees was over before trying to talk to the mayor. Mayor Erlichman had known her since she was little. He had been her father’s friend on the school board.

“So what’s going on?” he’d asked, white skin showing hints of red as he furrowed his brow.

She’d decided to be blunt. “What can we do, on the festival committee, to make sure that the festival remains Hanukkah-centric?”

The mayor sighed, and the expression on his face wasn’t pretty.

“It’s all about the numbers,” he said, rubbing his beard with his palm. “You need to make this huge. We need to be on the map for these people to believe that Hanukkah is and should be our focus.”

She nodded. “In other words, our campaign needs to be ‘Hollowville is Hanukkah.’”

The smile that brightened the mayor’s face was answer enough. “That would help. As well as the profit coming in to justify the expense.”

And with what amounted to her marching orders in hand, she’d left the meeting and headed to the park between the library and the bookstore. She sat on a bench in the middle of the park, and tried to figure out what to do. How to turn their small town Hanukkah festival into something bigger. Better. More.

It would, she decided, take a miracle.

But she didn’t find it at the festival committee meeting that night. Upon passing the information she’d learned on to the rest of the committee, one of the committee members, Judith Goldberger, wondered, “Why not make it a ‘holiday’ festival?”

She tried to breathe and bank the fire that wanted to erupt from her ears.

The festival had been born from a small temple bazaar ten years before. It eclipsed the small temple’s space after three years, continuing to grow like a miracle out of the famous Hanukkah story for seven years until it filled the whole central area of the town.

Through all of that time, it stayed true to its origins, even as more of the town residents participated.

Those who celebrated Hanukkah shared their customs with the ones who didn’t. Children sang Hanukkah songs, merchants sold silly Hanukkah sweaters, people raced in dreidel costumes across the open ice, and they shared joy along with crispy latkes and sweet soofganiyot.

Hollowville needed a Hanukkah festival. Because it wasn’t just a festival. It was a sign of acceptance, of support in difficult times.

And she was going to do her best to make sure it had one. “I—”

Chana Levitan, the committee chair, put up her hand, exasperation clear in her eyes, her normally olive skin pale with anger. As the committee came to silence, Sarah held her breath.

“This isn’t a holiday festival,” Chana proclaimed in her best chair-of-the-committee voice.

“But,” Judith continued, “we owe it to the community to—”

“We owe our gratitude to the community for letting us use more of the town proper to stage the festival, for sure. But we are not putting on a holiday festival,” Chana continued. “We’re putting on a Hanukkah festival.”

“But we’re not making enough money as a Hanukkah festival,” said Jack Lewis, a city finance guy and also a new member of the committee, his nose pink with either alcohol or frustration. She couldn’t tell which. “We need to cut our losses and let other people do this.”

“What kind of advertising have we been doing?” Sarah wondered. “Where’s our social media? Where is our outreach? Newspapers? Where’s our webpage? Why haven’t we been doing anything to tell people about us?”

“Good point, Sarah,” Chana said, smiling as she opened a file on her tablet and started to page through it. “Looking at last year’s attendance records, we discovered that we’d started to get traffic from outside Hollowville. Tiny little local newspapers, a few patches and things. And the Empire Daily?”

Yep. She made a note to ask her best friend Anna, who was an assistant curator at a museum in Manhattan, for a list of the journalists and critics she trusted. If they weren’t capable of covering the festival, they’d know someone who would be.

“But that was it,” Chana said, finishing her answer. “Yet the bottom line is that Hanukkah is our identity,” Chana’s eyes rested on the members of the committee. “It’s our past, it’s our future, and it’s definitely our present.”

“So,” Sarah said. “That’s where we start. We have an identity. We use that to create a cohesive and clear social media and advertising campaign. We also need to create a press kit, send releases out.”

“We also don’t have a logo,” Shelly Averman, a long-time committee member, pointed out. “I used to be in advertising and I can absolutely help with the releases and things. Shake a few of my old contacts. Not so good at the social media. But what I do remember,” the older woman continued, tapping a white finger against the table in front of her, “is that we need a logo and a slogan.”

“Slogan is obvious,” Jack Lewis said with a smile.

Sarah nodded. She’d even said it to the mayor. But they needed to say it out loud. “Hollowville is Hanukkah.”

And suddenly there were cheers in the room.

“Still no logo,” Judith Goldberger pointed out, pink lips pursed in distaste on her pale face.

“I should think that’s obvious too,” Sarah added. “A menorah, of course. And we need a large one to light in the middle of town.”

“So we’re finding someone to design a logo,” Shelly Averman said, “and we also need a sculptor for the menorah.”

“But,” Chana said excitedly, “we have a direction and a slogan, someone to create press releases, and we’re going to do our best to pull off a miracle.”

Miracles and Menorahs is available in the following formats: 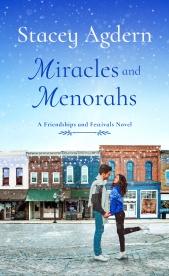 Did you know that Miracles and Menorahs and many titles are available digitally from Tule's own bookstore? Check it out!