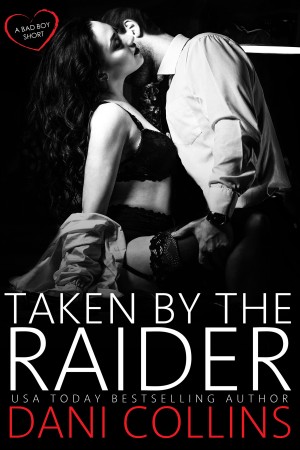 Taken by the Raider

The first time Aubrey Hargrave was “acquired” by corporate raider Griffen Woodlock, she was unable to resist his potent sexuality. She made the fatal mistake of mixing business with pleasure, but had to end their passionate affair to save her father’s reputation—and her heart.

At 20, Griffen pushed his abusive father out of his CEO position to take the chair himself. Aside from indulging his passion for beautiful women, Griffen hasn’t made an emotional decision since. When Aubrey cuts short their white-hot affair, he tells himself she can easily be replaced. Except she can’t.

Discovering Aubrey’s family secret gives Griffen the power to force a second take-over, but he intends to seize more than her business. He wants her.

Griffen Woodlock’s skin prickled with sexual awareness before he’d even turned his head from his monitor. Her voice did that to him. Always had. Even when she spoke with muted disdain.

Oh, Aubrey Hargrave was satisfyingly fuming, not that she expressed it beyond those two sharp words. He read it in the way she stalked into his office through his kitchenette—uninvited—her rain coat open and lightly gusting to reveal her pleated, black skirt and cashmere top in pastel pink. She wore plain black office pumps, which was a shame, since he preferred stilettos that showed off her beautiful ankles. He’d kissed them more than once when they’d been shod in designer footwear, accessibly propped on his shoulders.

She flushed as though she read his thought. As though she experienced the same flare of sexual energy as the distance closed between them. When did either of them not think about sex when they were anywhere near each other?

Self-consciousness had her tucking back a wisp of brunette hair that had been pulled by the spring wind from her ‘chignon.’ He only knew that word because she used it. She was class from head to pedicured toes. With some exquisite curves in between.

And she’d made him wait. He had expected her at least two days ago, but here she was, finally, in all her deeply anticipated, furious glory.

Ultra-contained, of course. A senator’s daughter had more breeding than to stoop to emotion-driven acts the way his mutt bloodline did. She looked rather pale, though. Her makeup was always tastefully applied, but today it seemed to stand out against her porcelain skin. Her honey brown eyes were a tad glassy, too. Tears? From a woman who controlled her feelings even more ruthlessly than he did?

His PA, Una, rushed in behind Aubrey like one of those high-strung, little purse dogs some women carried.

“I’m sorry, Mr. Woodlock. She barged past me.” The front of Una’s dress was soaked.

Aubrey set an empty pink water bottle on his desk and pointed at the logo. It was a women’s fitness gym. “Really?”

“That’s my line.” He eyed her, thinking maybe she wasn’t above fits of emotion after all. “You assaulted my PA?” Interesting.

“It was a coincidence that she was in the path of the water when I accidentally knocked over the bottle. Just like it’s a coincidence she works out at the same gym as my b—boss’s assistant.”

His gut told him that tiny stammer was significant, but he was too intent on getting rid of Una so he could have Aubrey’s surprising explosion to himself. It was incredibly provocative.

“Take the rest of the day off, Una. Buy a new outfit on your expense account and start locking all the doors into my office so this doesn’t happen again.”

Lock them now. He definitely did not want to be disturbed.

He didn’t take his eyes off Aubrey as he waited until he heard the latch click. His blood was thundering in his arteries like a spring runoff, making him hard. He leaned back to relieve it, affecting mild interest, but he was disgustingly thrilled to see her.

“The last time you were braced on my desk like that, I had your skirt up to the middle of your back.” He twirled the pen he held then let his fingertips skim to the end of it. “I take advantage of every opportunity. You know that.”

Aubrey did know, all too well. If he had any idea that she needed the support of his desk to stand up right now, he would brush her aside and go for the throat of her brother’s company without compunction.

And yet she felt herself warming at the image he thrust into her mind, which she was sure was as deliberate as everything else he did.

She took in his pin-striped shirt and dark brown pin-striped pants—both tailored to showcase his ripped physique to perfection. In his heart, Griffen was a border raider, primed and ready to fight to the death for whatever booty he had decided he wanted.

Tingles of anticipation swirled up her inner thighs. Memories of his touch, his endurance, the passion he incited in her, made her head rush.

“You’re slipping,” he told her, gaze knowing and amused. “You’ve already forgotten why you’re here. I expected you to notice right away that I was buying up stock. Were you afraid to come? Or afraid you would?” He added the last with a suggestive slide of his gaze down to her chest. His mouth quirked with undisguised appreciation.

She’d been unconscious in hospital or she would have noticed the first transfer on Monday. Her primary role at Cutting Edge was vigilance against hostile takeovers. The medical research and development start-up was a tasty morsel she’d been quietly guiding through pirate waters.

And, yes, she had been afraid to come here today. She was weak in more ways than one when it came to this man.

“How much do you want?” she asked, grasping for clear thought. “For the stocks,” she clarified, before he twisted her words into another sexual innuendo.

“Please,” he dismissed, as though her offer insulted him.

She hadn’t expected him to accept greenmail. He was more of a blackmail kind of man. This whole set-up felt like blackmail, from her half-brother’s mother who had decided her son deserved his share of the Hargrave fortune to her father’s emotional plea for Aubrey to help him keep his past in the past.

“What then?” she demanded. “Why on earth would you target a minnow like Cutting Edge?”

“Why wouldn’t I? They turned a very nice profit with that surgical laser tool last quarter.”

“Exactly. This isn’t pots and pans, Griffen. It’s instruments that save people’s lives. You can’t push products to market because you are ready to make money. The general public doesn’t buy them from an online cart with a coupon.”

“You’re still sore about that? I kept you on and gave you a very good job after that acquisition. Frankly, I would have thought you learned enough you wouldn’t be in this position with your boyfriend’s company now. Of course, you were on vacation without him so perhaps there’s trouble in paradise?”

Aubrey literally couldn’t stand any longer. She carefully straightened, then seated herself in the chair behind her, setting her bag on the floor as she did. She tried to make it seem as though she was only getting comfortable for negotiation, but her limbs were trembling and her leg felt too heavy to lift and cross over the other.

In other ways, she felt alive like she hadn’t in months. From the moment Griffen had invaded her claustrophobic office above the Campbells Home Goods flagship store two years ago, he had been delivering this kick of awareness every single time she was in his presence.

“I’m your new boss,” he had informed her then. “Tell me why I should keep you.”

She had needed to catch her breath that day, too. His sex appeal was an assault to the senses from his arrogant height to the way his tailored clothes hugged his powerful shoulders to the scent of his aftershave, lingering against his precision trimmed stubble. The direct way he looked at her, which was both indifferent and filled with masculine appreciation, had made her ultra-aware of her erogenous zones.

“I get the facts before I react,” she had said, mostly because it was one of her father’s stock phrases when he was swarmed by media. “Tell me how the company changed hands.”

“It’s called a takeover,” he had said dryly.

She had been looking for more detail than that, but okay.

His gaze had flicked around the room in ruthless assessment, taking inventory of the dated equipment. He’d read the white board where she had brainstormed ideas for staying afloat and there had been fresh appraisal in his gaze when he returned his attention to her.

“That last one might work. Put together your best plan for making it happen. Meet me in my office in two hours. I want hard numbers.”

One hour and forty-nine minutes later, he had rejected her proposal without more than a superficial glance.

“I wanted to see what you could do on a short timeline,” he had told her after flicking through her slides, not even making it to the end. “We’re going to push everything online. You can execute it.”

‘Execute’ had been the appropriate word as she cut the staff down to a third and watched him close all but one brick and mortar store so he could sell off the very excellent locations. She had remained working for him because someone else would have done everything he directed her to do without sitting in this chair, more than once, to fight for this or that person to keep his job or receive a severance package.

“You want the real estate,” she surmised now, licking her lips.

She held back explaining that Drake was not her boyfriend and that she had not been on vacation.

“The property interests me,” he agreed.

Well, it had a very nice fail-safe that wouldn’t prevent his takeover, but it would make him unhappy when he saw how much extra the acquisition would cost him. For the moment that was enough to keep her spine strong. Breathe. Think.

That was never easy in his company. The man completely undid her.

“What are your plans for the actual company?” As if she didn’t know.

“Restructure, sell off what isn’t necessary.”

“Job loss and quick profit.” Her thready blood pressure began to pound. “Everyone and everything at Cutting Edge is necessary. I know how to run a tight ship. It’s a company that needs to exist.” She was living proof of that.

“You’re here to fight for it? I assumed you’d been sent.” His mouth twitched, but he was watching her the way a hawk watched a bunny, tracking it before he bothered to drop off his perch and snag her soft fur in his talons.

“You thought I’d beg for clemency?” She scoffed. “For old times’ sake?”

It had never occurred to her until this conversation that he would think she was involved with Drake. Maybe it was a mistake to let him continue believing that, but she had so few defenses otherwise.

“You’re a lot of things, Griffen. Sentimental isn’t one of them. Appealing to our history would never work with you.”

“You don’t know that.” His gaze swept the side of her face like a caress, then went down to her chest.

She looked away, trying not to think of the things he’d done to her in this office.

He stood and came around to lean his hips on the front of the desk so he faced her. “Why don’t you try?”

Taken by the Raider is currently available in digital format only: 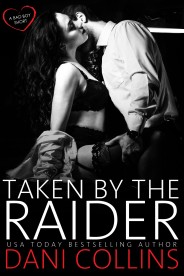 Did you know that Taken by the Raider and many titles are available digitally from Tule's own bookstore? Check it out!