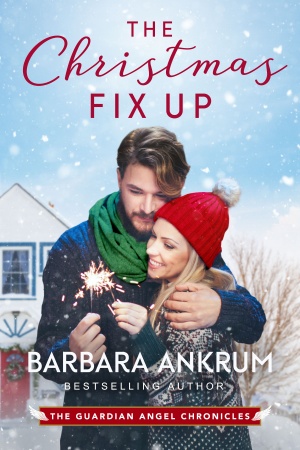 The Christmas Fix Up

Heaven made a mistake. Can one clumsy, rebellious angel right a wrong by Christmas Eve without losing her heart?

Angel Elspeth Aloysious is hidden in celestial clerical work to avoid painful memories when her mentor sends her on her first earthly mingle. Her task—open the closed heart of the handsome and busy Sam Wynter so his daughter can have a new mother before she drifts too far from her destiny. Elle has one week and one rule—don’t fall for Sam.

Sam Wynter has no intention of remarrying. Instead, he’s focused on raising his daughter Molly and building his career. But when he meets a captivating and beautiful stranger in town for the holidays, he rediscovers joy and a sense of fun with Elle through donating his time and skills to those in need. Both Sam and Molly quickly bond with the sparkling Elle, and Sam starts to dream of a different future.

The clock is ticking down on Elle’s time on Earth. Can these two mismatched soulmates, who are worlds apart, find their happy ever after?

Two Spins Around the Sun Earlier

“Absolutely not. You know how I feel about this. I won’t do it.”

Elspeth Aloysius resolutely ducked behind the overgrown stack of intakes that covered her Celestial desk, her long blonde hair curtaining her panic. But naturally, her attempt to dodge her mentor, Marguerite Ciel, failed miserably, and in the next instant, Elle felt her standing behind her shoulder. And beside Marguerite was her fuzzy little companion dog, Enoch.

“It’s time. Long past time for you to take a guardianship, cher.” Marguerite’s easy Cajun drawl seemed to have a deliberate edge to it today. “You can’t hide here in the Eternal Entry Files forever.”

“Hide? I am doing no such thing.” But getting to her feet, Elle strode away to do just that in the bowels of the file room—or, as confused new arrivals often referred to it, ‘the Cloud’—an endless maze of records, full of twists and turns one could easily lose oneself in, if not careful. Particularly if one wanted to.

“There is a limit to the Council’s patience on this matter, Elle,” Marguerite said, right on her heels and apparently not about to let this go. “And I’m afraid they have reached that limit.”

“But I’m doing my job,” Elle insisted, waving a hand before one of the drawers and transferring an existent history with a simple gesture. “And doing it better than anyone else ever has, I might add. I mean, if you consider how I have upgraded all the systems for—”

“After nearly two Earth centuries at that desk, you are quite correct,” Marguerite said, drumming her fingers against her crossed arm. “And certainly no one is arguing your proficiency at isolation.”

Crushing isolation, she meant. Elle supposed that was perfectly clear to anyone who happened to notice her—though, frankly, she was surprised anyone had. She had upgraded herself into near total aloneness here.

And nearly two centuries? Had it been that long already? She supposed she’d lost track. Then again, time passed much, much more quickly here than it did down there. But isolation, as an objective, had never been her intention, rather an unfortunate consequence. She’d certainly tried other Celestial occupations before this one. Assistant to the Celestial Choirmaster . . . along with the unfortunate incident with the irreplaceable bell ringer choir’s bells. But how was she to have known that sitting on one end of that table would send the whole thing crashing upside down, damaging several ancient relics beyond repair? And then there was the Junior Rainbow Instigator job, which didn’t end well either. Something about accidentally deleting indigo and causing an uproar in the Earthly scientific community. But all that happened a long time ago.

“You must understand that you are not the only one capable of filling this position,” Marguerite continued. “Others have requested—”

“I am . . . fine here,” she said, though that was a lie. The endlessness of this work for another few centuries or more was almost too awful to contemplate, but still better than what Marguerite was suggesting.

Marguerite’s kind brown eyes softened Elle’s anger, but did nothing to sway her. “Be that as it may, if I’d wanted to be a guardian, I would have asked to be one at the start. Which I didn’t. It is our right to choose. That’s the rule, isn’t it? I chose a steadier, more predictable path.”

Marguerite sighed. “Path, by definition, implies your journey will lead somewhere. Our purpose here is growth, regardless of which path we choose. This job was never meant to be permanent for you. Nor was it meant to serve as a sanctuary. You forget, cher. I know why you refused a guardianship and chose to stay when so many of the souls you came in with have returned, many times over already, or have moved up in the guardian ranks.”

That much, she could not deny. And to Marguerite’s credit, she had never picked at Elle’s particular wound, but allowed her to try to deal with it on her own. Elle had managed, rather handily, to bury it instead, in the isolation of the files.

She wondered if Marguerite had been secretly watching her scan the life files arriving from the Entry Realm that had snagged her attention like the sparkle of sunlight before she filed them away, wishing that she wasn’t so completely alone.

She dug her fingernails into her palm. I must be slipping to have allowed her such unfettered access.

She stuffed two more files in the nearest cabinet and turned to put more distance between herself and Marguerite. But not before the drawer slammed shut, catching the tips of several wing feathers there, jerking her off her feet.

A yelp of surprise escaped her as she fell, but she quickly tugged her wing out of the cabinet and popped back up. “I’m okay,” she told no one in particular.

Beside her, Marguerite bit her lip, struggling to contain her mirth.

Petting her bent feathers back in place Elle stalked back down the aisle. Add that to her list of technological adjustments: fix meddlesome file drawers.

“Yes, that just happened,” Elle told Marguerite, forestalling any comment as she trailed beside her. “So, you see why this whole thing is a terrible idea.”

Marguerite blocked her by moving ahead of her and leaning against a file cabinet. The whole endless aisle responded with a shiver of movement, a reaction that reflected the tension between them. “That’s where you’re wrong. Elspeth, I have been protecting you from the Council’s wishes for quite some time, knowing your resistance. But even those who choose not to go back, or become guardians, find a way forward. You, cher, are standing still as a breathless summer bayou. So, when Desmond requested a temporary replacement for the child he’s been guarding, the Council decided it should be you.”

Elle paled. “Wait. A child?” Unbidden, her wings splayed and arched like a peacock’s tail—always ruled by her emotion—then curled protectively around her. She fussed at the bent feathers of her left wing. “Then definitely no. You said nothing about—”

“Her name is Molly. And she’s charming as a sunrise—”

“No!” Elle pointed at Marguerite. “No children. I-I can’t. Please don’t make me.”

“You can and you will. Roland’s decision is final.”

“It’s too much responsibility to teach them to listen. They don’t.”

“They can and they do. And you will teach her.”

Elle straightened her shoulders and laid flat her wings, feeling defeated. She knelt down beside Enoch, who licked her fingers. Enoch always knew how to comfort her. She dug her fingers into the dog’s curly fur. Finally, she said, “You insist, then?”

Marguerite nodded. “It is what’s best for you, ma fille.”

Marguerite took her arm and began walking with her toward Elle’s desk. “You will do your best for her.”

A walk to the gallows might have felt easier. For there was only one thing Elle knew with certainty: failing the Council or even herself was bad enough. It was infinitely more dire to fail a child.

The Christmas Fix Up is available in the following formats: 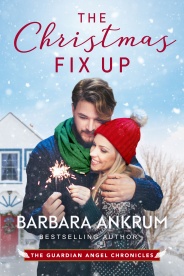 Did you know that The Christmas Fix Up and many titles are available digitally from Tule's own bookstore? Check it out!