Malcolm McKenzie will never forget that night in New York when he put Ava Galvan in a taxi following a heated argument, and the Argentine beauty was involved in an horrific accident—one that ended her career as an acclaimed soloist with the Manhattan Ballet, and impaired her memory and ability to live an independent life.

The Scottish tycoon and philanthropist lives with his guilt, and another consequence:  Ava was pregnant with his child the night of the accident.  Ever since that night, Malcom has raised Jack as a single father.

But Ava is stronger now, and Jack wants his mommy to come home.  Malcolm has never stopped wanting her and he’s determined to do whatever it takes to claim Ava—with or without her consent.

He knew Ava’s daily routine down to the minute.

It wasn’t a difficult routine to learn. She never varied her routine. It was the same Monday through Friday. A car picked her up promptly at eight ten for work. She was at her desk at the ballet school by eight thirty. She taught two classes before she had lunch at her desk, and then two more in the afternoon, in between meetings with the school and company.

The same town car that dropped her off in the morning returned at six to collect her. Back home, she rarely went out in the evenings. She rarely ordered food for delivery. On weekends she stayed in, except for the special evening where she attended a performance, and, then again, she traveled in the town car, arriving a full hour and a half before the performance to give her time to get into the theater before the crowds arrived, and then returning a full hour after, when the crowds had dispersed. It wasn’t just because she moved slowly, but she preferred obscurity. She didn’t want anyone to see her, or recognize her, not when she’d once been Manhattan Ballet’s principal ballerina, loved and adored for her grace, talent, and beauty.

Ava’s life consisted of work and the ballet. Just as it had always been work, and the ballet, although before she’d been on the stage, not in the back row of seats in the auditorium.

He knew her routine because he had her followed. The security detail was discreet and she never even knew they were there, just as she didn’t know the town car was his, and the driver his, too. She didn’t know the Manhattan Ballet had initially given her the first part-time teaching job because he’d insisted the company arrange something for her—or he’d pull his support. The company listened. He was their largest benefactor, after all.

She didn’t know he’d been in the background opening doors, smoothing the way for her return, and he didn’t want her to know.

It was enough that she was working, and that she’d been promoted several times from a part-time, assistant teacher for the children in the dance school, to working with the older students and the professional dancers in the corp.

The only problem was that while she remembered young Jack, Ava didn’t remember marrying Malcolm.

The Tycoon’s Forced Bride is available in the following formats: 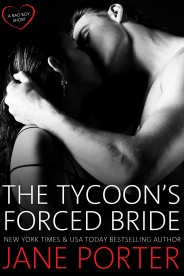 Did you know that The Tycoon’s Forced Bride and many titles are available digitally from Tule's own bookstore? Check it out!