The Raffertys of Last Stand, Book 2 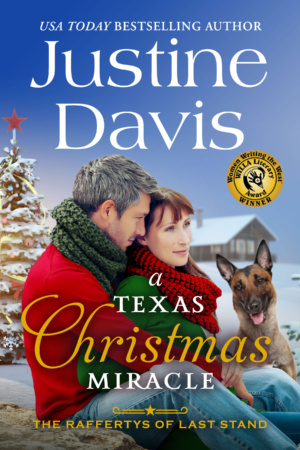 The Raffertys of Last Stand, Book 2

Two people who don’t believe in Christmas or miracles…

Retired from special forces and back on his family’s Texas ranch, Chance Rafferty’s finally found some peace through creating a foundation to rescue and retrain military K-9s thought to be beyond redemption. He prefers to be left alone with his dogs and his work, but when a woman arrives shortly before Christmas looking for the dog that saved her husband’s life, Chance is astonished at the dog’s—and his own—response to her.

Though it’s been years, Ariel Larson still dreads the Christmas season because it marks the anniversary of her deployed husband’s death. When she learns her husband’s K-9 partner survived combat, Ariel feels she’s been given a lifeline to escape her grief. She suddenly has a sense of purpose she’s been desperately missing. But she never expected the man determined to rehabilitate the traumatized animal would have such a stunning impact on her own life.

Can these two wounded hearts come together to create their own Christmas miracle?

Anyone who knew him would find it beyond odd that Chance Rafferty was talking so much. He found it odd himself, even though he was only talking to the dog huddled in the corner of his small living room. The dog watching him with the wariness of a well-trained animal who sensed a threat.

But Chance knew everything and everyone seemed a threat to the creature just now. And so far, nothing he’d done seemed to overcome the trauma the animal had suffered on that last deployment. Losing his left foreleg was only part of the damage done.

Chance had put everything else on hold, including taking on other dogs, for this last-ditch effort with the jumpy animal, because he needed full attention. It all had to be confusing to the sleek, lean Belgian Malinois, but he never gave up. Even with only three legs he was still agile, if a bit awkward. Hence the nearly wall-to-wall throw rugs covering the slick wood that had sometimes made the dog slip.

The dog’s big, dark ears twitched. He clearly responded to his relatively new name; they’d come that far at least. Lucas, the orphaned kid his brother Keller had taken in—and hadn’t that led to some upheaval?—had picked the name, not just because it was short for tripod, but because it also sounded like try, which the dog never stopped doing.

He felt a jab of…something as he thought of his older brother. It wasn’t that he begrudged him his newfound happiness, it just made Chance feel even more apart. Separate. Because what Keller had found with his now fiancée, Lucas’s cousin Sydney, was something Chance would never have. He’d long ago accepted that, so he didn’t understand why seeing them together made him feel a bit tangled.

Maybe it was because it reminded him too strongly of his mother and father. He’d had sixteen years to observe them together, minus Dad’s deployments, before he’d been killed. And if there was one thing he’d never doubted in his life, it was that they loved each other. He even remembered the day he’d added “passionately” to that understanding in his mind. When he first began to realize what passion was. When he began to feel a little bit embarrassed by how obvious it had always been, but he’d been too young comprehend it.

Sometimes he’d even envied his friends who had more staid parents. But more often he’d wondered what it would be like, to feel that way about someone. He’d thought, with Liz, that he’d found it. But her supposed love hadn’t lasted past his second deployment, when she’d handed his ring back to him literally as he was leaving to get on the plane, saying she wasn’t cut out to be a military wife. It had seemed devastating then. Later he’d known it was a lucky escape.

He heard the low rumble of a suppressed growl. When he looked over, he saw the dog’s head up and turned toward the east side of the house. Guardianship had been bred into the breed, which was why the Malinois was so often used as a working dog. The military then honed that instinct to a razor edge, creating the weapon known as a military working dog, or MWD, with the payoff being countless lives saved.

But not every life. No dog, and no tactic could keep what they did completely safe. And it wasn’t safe for the dogs, either.

His mind skittered away from the old pain, knowing it was pointless. His own four-legged partner had been taken out by a terrorist’s bullet on his first mission with his new handler. It could have happened anytime, could have happened with him, but it hadn’t, and sometimes he had to fight not to blame the new guy. Chance would have given anything to have been able to bring Hondo home with him, but the dog had a few more years to serve. He’d put in the request to adopt him the moment he was done, but instead had gotten the phone call he’d dreaded, three years ago next week.

Tri growled again, still focused on the east side of the house. His family knew well enough to announce themselves, so it wasn’t hard to guess it was a four-legged creature rather than two.

“Probably a white-tail,” he told the dog reassuringly, although so far reassurance hadn’t registered much with the wary animal. But he kept talking anyway. Even though it was against his nature.

He’d not taken on any new animals since he’d acquired Tri, even though he was set up to deal with more. He’d sensed from the first moment he’d met the traumatized creature that this one was going to need all his focus. And he deserved it, given Chance’s part in what had happened to him.

But it had been nearly seven months and he sometimes felt as if they’d made no progress. Yet he kept resisting the idea that the dog would be one of those who was permanently lost. It happened—he’d had a couple of them here, little tamer than the coyotes who roamed the Hill Country. But at least here they got to live out their lives. And with more freedom than they would have had in most other places, thanks to Sydney Brock.

The woman who had so brightened his older brother’s life had also helped him; her company’s sizeable donation had not only provided operational funds for the next year but enabled him to finish the fence he’d been building bit by bit, and now the dogs had several acres to run free on. And she’d made that donation before she and Keller were a thing, simply because she liked what he was doing, and thought it worthwhile.

Who’d’ve ever figured Keller’d end up with a globe-trotting businesswoman?

Although she’d called a complete halt to the globe-trotting that had built her business, leaving it to others while she and Keller built a family with Lucas.

Another growl, and he searched for something, anything to say. It was difficult. He’d never been a chatterer by nature, and that tendency had influenced his decision to live his life out here on this remote corner of the ranch. That it was the ranch where he’d grown up let him keep that tenuous grip on being part, albeit barely, of the Rafferty family. He owed his father that much tribute, no matter how difficult it was, no matter how much he’d like to be somewhere where no one knew him or expected anything from him. Anything like human contact. So he was secretly relieved that the nature of his work with the dogs required some separation.

He resorted to explaining the presence of what he was fairly sure had the dog’s attention.

“Food gets a little scarce out there this time of year. But some plants have this antifreeze kind of stuff in the sap, so they keep their leaves. The deer have to hunt those plants down, though. So, they come closer than they usually would.”

It half-worked. The growl stopped, but the dog’s head never turned away from the sound outside.

“With some plants it’s not worth the effort even for the high energy value. I mean, chomping down on a prickly pear?” he went on, noting how raspy his voice sounded. He hadn’t talked this much at once in…well, a very long time. Even when he’d gone to pick up Tri—then called Atlas—and had run into a couple of guys he knew, he hadn’t talked this much.

“If it didn’t mean they were desperate, I’d like to see them clear out all that damned Christmas cactus. I’m sick of hearing the name. And let’s not even start on mistletoe. Stuff ought to be banned. Or the people who decided it meant you have to kiss whoever’s standing under it.”

And finally he had the dog’s attention. Problem was, he didn’t know if it was because he’d gained it himself, or the critter outside had moved beyond whatever mental perimeter the dog had set himself. Either way, Tri was looking at him now. Still wary. Less wary than when he’d arrived? Maybe. Or maybe that was wishful thinking. Not that he indulged in that much, if ever. He knew how futile it was.

He stifled a yawn. He didn’t sleep a lot anyway, but since he’d brought Tri into the house it had been even less. Partly out of caution—it wouldn’t do to be neck-deep in nightmareland if the dog took a notion to lose what grip he had on civilization in close quarters with a human. And every time he dozed off, when he snapped awake it was to see those near-feral eyes on him. He didn’t know if the dog ever slept at all.

Still, Tri didn’t growl at him like everyone else, and he’d accepted a small level of command from him, so Chance guessed that his scent must be somewhere in the dog’s jangled memory. He and Tri’s handler had been in the same unit for a while and had become friendly. Chance had seen him and Atlas on his own last deployment, before he’d mustered out and come home. But they had had another deployment to go.

One deployment too many.

He gave a shake of his head before he spiraled down into fruitless wondering. Wondering why he hadn’t been able to convince the brass about the folly of that mission. Why they’d decided he wasn’t worth listening to. Why he’d been the one spared when the man with a loving wife he adored had gone home in a damned box. Chance had a family too, but he knew that while they’d no doubt have grieved, his absence wouldn’t have caused much of a ripple in their lives, because he was barely in their lives on a day-to-day basis. And now that he was home that hadn’t changed much, even after nearly four years.

He doubted it ever would.

A Texas Christmas Miracle is available in the following formats: 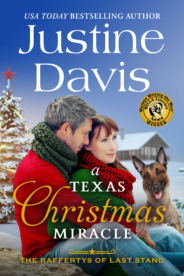 Did you know that A Texas Christmas Miracle and many titles are available digitally from Tule's own bookstore? Check it out!