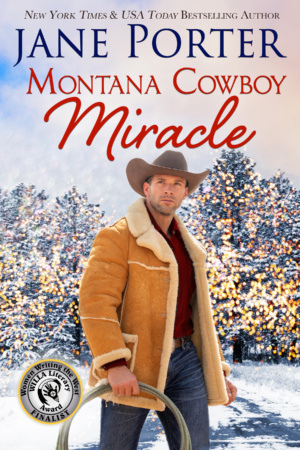 This Christmas he’s confronting the past…

Wyoming rancher Cade Hunt rents a room in Marietta for the month of December for one purpose—to unravel the mysteries of his past. He’s not interested in the local Christmas festivities, even though his pretty landlord Merri Bradley is more appealing than any woman he can remember.

After losing her husband far too early, hospice nurse Merri has dedicated her life to caring for the grief-stricken during their final goodbyes. She loves her busy and fulfilling life and has no time for a brooding cowboy during her favorite time of year. Yet Cade is tempting, and she’s technically his hostess.

But Marietta is full of Christmas magic and miracles. Soon Cade is embraced by the family he didn’t know he had—a grandfather and four Wyatt cowboy cousins. For the first time in his life, Cade has a sense of belonging and the desire to set down roots if only he can convince Merri that second chances are the best chance for their own happily ever after.

Three times a week Cade Hunt had dinner with his boss, Dorothy Warner, in the dining room of the sprawling log cabin built early in the 1920s when the US National Parks were constructing their great lodges. The big Wyoming house echoed the influences of Park Architecture. The dining room’s rustic beams were stenciled in pale gold, the fabric on the oversized chairs a rich blue with a Native American motif, and the huge leaded windows overlooked a garden that was now dormant and covered in snow.

Cade was the only Sundowner Ranch employee who regularly took meals with Dorothy, or Dot, as he called her. Sometimes Emma, the big house cook and housekeeper, would join her for a bite, maybe dessert. But that was a rare occasion. Then they’d sit in the family room and watch Jeopardy! and enjoy the homemade cake or pie that Emma had made that day.

Cade and Dot were close and had been since he was a rebellious teenager looking for a place to land since home had been anything but easy. Dot had never married or had children, and had a reputation for being tough, but she’d taken a liking to Cade, and had stuck her neck out for him on more than one occasion, pushing him to learn, and grow. To be a better man.

It was Dot who preached forgiveness, something that wasn’t his strength. She also recommended forgetting, something else he didn’t do well. But he tried, for her sake.

There weren’t many people Cade cared about, but Dot was one. The number one. And then there was his missing sister, and if he ever found her, he wouldn’t let her go.

“Don’t be angry, Cade,” Dot continued, folding her crimson cloth napkin and placing it next to her plate on the table, her thin hand trembling ever so slightly. “This isn’t a punishment. I’m not singling you out—”

“But you are,” he interrupted. “I’m the only one you’re telling to get lost this Christmas.”

“I’m not telling you to get lost. I’m telling you that this is a good time to go look for your sister. You say you want to find her, but you keep putting it off.”

“Because I’ve run out of leads.”

“What about your father? Then find him.”

“That’s different. He could have found me—”

“Not if he didn’t know about you.” Dot lightly drummed her fingertips on the table. “You should give him a chance. Find out the facts. You’ve always wanted to know the truth. Here’s your chance.”

“I’ll reach out after the holidays.”

“I’ll need you after the holidays. Go now. Take some vacation. Enjoy Montana.”

“I’d rather be here. This is my home. Unless you’re firing me.”

She rolled her eyes. “You know I’d never do that. You’re indispensable. I can’t imagine the Sundowner Ranch without you on it.”

Cade folded his arms over his chest. “So why ask me to take off until after Christmas?”

“You need a vacation. You never take one.”

Dot’s tone grew as flinty as his. “Fine. Let’s put the cards on the table, Cade. Alistair and his family have asked that you give them space this year. But you won’t if you’re here. You’ll be you, which is what I like, but it’s what they don’t like. You’re intimidating.”

He made a rough sound of disgust. “I’m not.”

She smiled faintly, expression warm, amused. “Not to me. But my family—”

“Your animosity puts me squarely in the middle.”

“It’s difficult to watch them push you around. They talk down to you. They act like the ranch is already theirs. I can’t leave you alone here.”

“I’m old, not feebleminded. And for the good or the bad, they are my family. I can handle them.”

“They’ll run you ragged, Dot. They did last year. You had pneumonia after they left, were sick for weeks.” He didn’t add that it was touch and go for a bit, with even the doctor wanting to hospitalize Dot. Instead, they got her an oxygen tank for home, but Cade and Emma rarely left her side.

“I won’t push myself so hard this year. I acknowledge my limits.”

“But they’ll push you hard. Without me here, they’ll walk all over you, and I won’t allow it. I won’t permit—”

“This, Cade, is what Alistair objects to,” she interrupted. “You’re half my nephew’s age, but you act like the boss.”

“I am the boss.” He saw her arch an imperious eyebrow. “You pay me to be the boss.”

“I pay you to manage the ranch, not them. Or me.” She eyed him for a long moment, her small turquoise and silver earring catching the light. “You’re taking this so hard, my dear. You should be delighted to have some time away, time to yourself.”

“I prefer being here with you,” he said stubbornly.

She reached out, patted his arm. “I know. And I like you here. But Alistair is having panic attacks, or whatever they’re called, anticipating more conflict with you. He says he can’t be manhandled this year.”

“Apparently you glower.” Dot’s lips twitched. Her eyes shone with humor. “You make him uncomfortable.”

“It’s only for three weeks and a bit. A change will be good for you. You haven’t been away in years. Go travel, see the world, enjoy yourself, if you won’t look for your sister.” When Cade’s mouth opened, she cut the protest off quickly by adding firmly, “It’s not a request, Cade. It’s an order. Boss to employee, you’ve earned months of vacation time, use some of it.”

He couldn’t speak for a moment. She’d never made him leave before, for anyone, or anything. “When do I go?”

“You don’t have the tree up. Nothing’s decorated yet.”

“You hate everything to do with Christmas. You should be relieved.”

“But I always help you—”

“And this year they will help me.” She gave him a serene smile, a smile that indicated they were pretty much done.

He wasn’t ready to let it go, though. Nor was he ready to be sent off for the next three weeks. “This is a bad idea, Dot.”

She just gave him that smile again. “We’ll see.”

He didn’t exactly stomp out of the room, because he wasn’t eleven, and he wasn’t having a tantrum, but he didn’t leave in a good mood, nor give her that gentle pat on her shoulder as he left. Returning to his bunkhouse, a log cabin that had been the original Warner homestead, a cabin that had been his ever since he’d taken over as ranch manager four years ago, he shut the door harder than necessary. The logs in the cabin were stained dark, but the cabin was sturdy despite its age. Thanks to fresh chinking, and a new wood shingle roof, it was warm, dry, and homey. Usually, Cade took comfort in the snug log cabin, but tonight he tossed his coat off, tugged off his boots and threw himself down on the long leather couch fronting the fireplace.

He was not on board with Dot’s plan. There was nothing about her plan that he liked, but seeing as he worked for her, it wasn’t as if he could push back too hard.

And yet, if her family was coming in, he wanted to keep an eye on her. Make sure she wasn’t being overly taxed, or harassed. Last year the Jameses hounded her their entire visit, wanting to know her future plans, wanting to know what provisions she had made for them in her will. For heaven’s sake—who asked an elderly family member about their will?

Who had the audacity to do such a thing?

He wouldn’t call her relatives gold diggers, but they certainly weren’t visiting her every Christmas because they enjoyed her company. No, in their minds, Great-Aunt Dorothy represented financial security. She was their lifeline. But what had they ever done for her? When had even one of them cared about her as a person?

Cade had known Dot since he was sixteen—over half his life now. Her family had never even shown up until a few years back, when out of the blue, they decided it was time they all started spending the holidays together, which meant that Dot hosted them all. And every year like clockwork now, they flew in from wherever they lived, expecting rides to and from the airport, as if the ranch hands were chauffeurs. Cade had never once complained as he ferried them back and forth, and he had never objected to their endless requests, usually impatiently delivered as if Dot’s old rambling house, was a five-star resort, staffed for their pleasure. No, he didn’t ever protest—although he’d refused the folded five- and ten-dollar-bill tips because that was just too much—but on the inside, he seethed because as they swanned around the old house, speaking of Dot as if she were a child, someone who didn’t know her own mind, someone who couldn’t be trusted to run the ranch now that she was old.

But Dot, at ninety-two, was sharper than the rest of the Jameses put together. She’d grown up on this ranch, a ranch founded by her grandfather. She’d had three brothers, two died during the World War, and the other had been killed in a car accident his sophomore year at Yale. As a teenager, she became her father’s right hand. Even today she rode during the roundups. She oversaw the branding. She personally read every contract and agreement. Yes, she’d ask Cade’s opinion, but it was most definitely her ranch.

Her family, these nieces and nephews, and great nieces and nephews—didn’t know the first thing about the Sundowner Ranch and every year after arriving they’d poke into closets, examine paintings, discuss the value of the artwork and carpets, the furniture and books. Dot wasn’t even dead and they were putting a price on everything, divvying it up among themselves.

And now they’d found a way to get rid of him.

Cade wasn’t happy at all.

Montana Cowboy Miracle is available in the following formats: 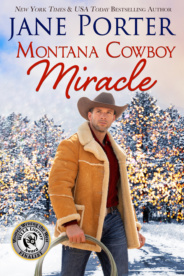 Did you know that Montana Cowboy Miracle and many titles are available digitally from Tule's own bookstore? Check it out!