Willamena Dunn is having a lousy week. Not only is her baby sister about to marry into the family of Dunn-Right Preservation’s biggest professional rival, but the historic bungalow of her dreams has just been bought by the most infuriating (not to mention exceedingly handsome and notoriously wicked) man to ever hammer a nail in Magnolia Bay, Knox Loveless.

But when Knox offers her a wager she can’t refuse, a bet with the coveted bungalow as its prize, Willa is sure her bad luck might finally be turning around—until Knox surprises her with a passionate kiss, and suddenly all bets are off.

Could this be just another one of Knox Loveless’ games, or will two rivals finally surrender to a long-simmering attraction and declare a truce once and for all?

Knox pushed off the vanity and came toward her, his eyes darkening with a determination that stole the confident smile off her face. Willa reached for the edge of the vanity, needing to steady herself and not sure why. Memories of their encounter at Teeny’s rushed back, how the nearness of him had excited her. Now he was closing in, and once again, her pulse was hastening.

“First off, Meen,” he said, “I haven’t asked you to the wedding. And secondly, if I wanted to steal you from Wes Carson, I could.”

Willa lifted her chin to reclaim her cool. If only her damn heart would slow down!

Knox folded his arms and leaned against the counter, one corner of his mouth sliding up.

Willa met his deepening gaze and answered, “Because I never date men with brown eyes.”

“What?” Knox squinted down at her. “That is the dumbest thing I’ve ever heard.”

“You can’t do brown? What does that even mean?”

“I don’t have to explain myself to you.” She dragged Peach’s purse further down the counter to resume her digging.

“No, I think you do,” Knox said, following her. “I think when a person says something so completely moronic, they should have to explain themselves.”

Willa reached back into the purse and shook her head, refusing to indulge him. In the past few days, Knox Loveless had managed to turn her into a jittery, blabbering fool every time their paths crossed. She wouldn’t let it happen twice in one week. No matter how warm her cheeks were growing.

“You’re going to tell me you’ve never been kissed by a guy with brown eyes?” Knox said. “Not one damn time?”

Willa was about to tell him no and that she knew his ire was only because he had brown eyes, but when she looked up and met his gaze, she felt all her smugness, all her advantage, gone. This close she could see the strands of copper in his thick brown brows, similar strands in the tumbled waves of his hair. How had she never noticed the rings of green around his pupils?

Her scalp tingled just as it had when he’d met her eyes in Teeny’s mirror and lowered his hands to her zipper.

Knox leaned in, his voice husky. “Then maybe I should kiss you and break this stupid record.”

He no longer seemed drunk. His eyes remained level with hers, and darkening with intent.

“It’s not stupid,” Willa whispered, unable to tear her eyes away from his. “It’s just…just…”
Just what? Say something, you idiot! Willa chided herself silently, knowing that with every quiet second she allowed to pass, whatever energy that crackled in the air between them like heat lightning would only increase. Even now she felt unbalanced, as if the smallest shift in her weight would cause her to topple into him.

“Just what?” Knox pressed, his eyes dropping to her lips and stalling there.

“It’s just the way it worked out,” she said. “It’s not like I planned not to kiss men with brown eyes. I’m not that ridiculous.”

He knew her so well. Too well. It was a bad thing to know someone as well as she knew him. Bad, bad, bad. Nothing good could come of kissing someone who’d tricked you into eating paste in Sunday School by telling you it was marshmallow fluff, or someone who’d scared you trick-or-treating by jumping out from behind a tree in a zombie mask.

So why was she still standing there getting lost in his eyes? Tongue-tied. Stuck.
“Just think of all the great brown-eyed men out there you might never give a chance to because of some idiotic rule,” Knox said. “I could be their hero. They’d build statues for me. Put me on the back of a coin.”

Willa’s head screamed move away, but she knew her eyes spoke an entirely different plea: Kiss me.

Then, tipping his head down just slightly—this near, that was all it took—Knox leaned in and covered her mouth with his.

Bet the House is available in the following formats: 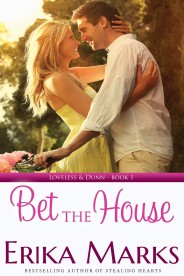 Did you know that Bet the House and many titles are available digitally from Tule's own bookstore? Check it out!