Dispatcher Zak Waller prefers working behind the scenes in the Sheriff’s Office of Lost Trail, Montana, but when a newcomer to the sparsely populated town is brutally murdered—and the Sheriff is quick to pin the death on an unknown outsider—Zak starts his own private sleuthing.

On the surface Lost Trail is a picture-perfect western town, offering a simple way of life revolving around the local ranches and ski hill. But almost everyone has a secret to protect, and no one knows that more than Zak. He’s part of a younger generation hoping to revitalize the town. But evil has dug in deeper than he knows.

Perfect for fans of the British television film, Broadchurch.

Zak Waller, dispatcher for the Lost Trail, Montana, Sheriff’s Office, expected the morning after Halloween to be busy, but he hadn’t anticipated a homicide case. The call came in early morning just after he’d made coffee.

As was often the case, he’d been the first into the office, and was still the only one here. The sheriff wasn’t what you’d call a morning person and Deputy Butterfield, who was nearing sixty, never saw the point in working if his boss wasn’t around to notice.

Usually Deputy Black was punctual, but she’d only been on the job about three months so there was still time for bad habits to develop. A former barrel racer, she’d brought her drive and competitiveness into this new career with her. Though she obviously thought she was hot stuff—she was tall, long-limbed, in great shape, and in possession of a confident smile—Zak himself hadn’t quite figured out what to make of her.

Earlier Zak had checked the messages and recorded two complaints of Halloween-style vandalism. A report of some flattened pumpkins on the front porch of the library, and, as happened every year, an egged front window for retired schoolteacher Miss Christensen. Both would have to wait.

“Can you slow down and repeat that please?” Zak said to the freaked-out nurse on the other end of the line.

“There’s a dead woman on the walkway.” Her voice was a little calmer this time. “I found her on my way to work. She’s been beaten. Badly. Poor, poor thing.” She gave a quiet sob before adding, “Probably been dead for hours. She’s so cold…but rigor hasn’t set in, so…”

Zak made notes, grateful it was a nurse who had made the discovery, though this one seemed on the verge of losing her professional calm. From his training at the academy—which he’d finally convinced the sheriff to pay for after two years of working and learning on the job with precious little in the way of instruction—Zak knew lots of people blanked out, or panicked in a tragedy. In the simulated emergency situations during his training he’d scored well for his ability to focus logically on what needed to be done.

That same urgent yet calm focus came over him now.

“Don’t touch her more than medically necessary. Be careful not to contaminate the scene. Can you give me your name and number please?”

The nurse did so quickly. “You need to send someone right away. It—she looks awful. It’s not right that she’s just lying out here. Can I cover her up at least?”

“Don’t touch anything. I’ll have someone there soon.” He entered the location, the medi-clinic on Tumbleweed Road, into his logbook. “You say you’re in the rear parking lot?”

“Y-yes. Her—the body—was pushed up against the back entrance.”

“Do you recognize her, Farrah?” In a county of less than three thousand citizens, this was more than possible.

“No, but she’s young. Early twenties. It’s hard to be sure though because…her face is pretty bad.”

“I’m going to hang up now to call this in. Stay calm, help will be there soon.” He heard voices in the background, someone shouting, What happened? “Keep any passersby well back from the scene. Can you do that, Farrah?”

He called the sheriff first, catching him on his way to the office. “Farrah Saddler, the nurse at the medi-clinic on Tumbleweed, found a woman’s body on the street when she showed up for work this morning. Said it looks like the woman’s been beaten to death.”

Zak forgave him his confusion. In all his career Sheriff Ford had probably fielded only a handful of calls like this one. Yes, death occurred here. Lots of it. But potential homicide? Very rarely.

Zak repeated everything Farrah Saddler had told him.

“Okay. I’m only a few minutes away from the scene. Send Butterfield out here. Hell, might as well send Black too. You said the woman looked beaten? Make sure Black has the evidence kit. Oh, and don’t forget to call Doc Pittman.”

Doctor Pittman was the local coroner and Zak had his number next on the list. He caught the doctor, a widower in his mid to late fifties, at his breakfast table. Pittman took the call with the measured calm of a man who had weathered a good many emergencies in his decades of being the only doctor in town. Pittman assured Zak he’d be at the scene pronto.

“Thanks, Doc.” Next Zak called Butterfield, who claimed to be on his way to work, even though Zak could hear his wife talking in the background.

Just as Zak was about to move on to Deputy Black, she stepped into the office. Zak had scored top marks in his anti-bias training, too, but he could not help appreciating the snug fit of her regulation trousers and shirt. She had her golden hair up in a bun, which formed a handy backstop for her aviator sunglasses.

“What are you staring at?” She slung her jacket on a peg, then moved toward the coffee machine.

The woman had attitude, no doubt about it.

“Don’t bother pouring that coffee, Deputy. We just had a call—”

“Damn, I hate Halloween. But I’m sure the outraged citizen who had their car egged, or their window broken can wait until I get some caffeine into my system.”

“This wasn’t about vandalism. We have a suspected homicide.”

She froze, cup only half-full, then set down the pot. “Homicide.”

He glanced down at his logbook. “Call came in at seven-fifty. A nurse found a body behind the medi-clinic on Tumbleweed. The woman was dead, her body already cold. The nurse said she’d been beaten.” Zak paused before adding, “The sheriff wants you to bring the evidence kit.”

“Homicide,” Deputy Black said again. Then she smiled. “And I didn’t think there’d be any action in this one-horse town.” She poured a generous splash of milk into her cup, then downed the coffee in several swallows. When she set down the empty mug she clucked at him with mock sympathy.

“Poor Zak. You have to stay here and mind the phones while we have all the fun.”

Zak shrugged. Black often tried to goad him, but as the runt of a litter of four boys—the three oldest much taller and broader than him—he’d learned to never rise to tossed bait.

Black’s expression shifted from smug to puzzled. “I don’t get it. If you’d applied for the deputy position when Redford retired, you would have been a shoo-in. Not that I’m complaining, since I’d be out of luck if you had. But why the hell didn’t you go for it?”

Zak hated having to state the obvious, but Black obviously wasn’t going to let this go. “I didn’t want the job.”

Zak’s answering smile might be a front, but no way was he going to let on his true feelings about his profession, certainly not to Black of all people.

“What’s wrong with you? You’re reasonably smart. Not in terrible shape. If you made an effort, in ten years you could probably be sheriff.”

“If I don’t want to be a deputy, what makes you think I want to be sheriff?”

She stared at him. Curled her upper lip. “You don’t make sense.”

“Great. I love being an enigma.”

Finally he’d shut her up. She snatched the evidence kit and her jacket and left.

Bitter Roots is available in the following formats: 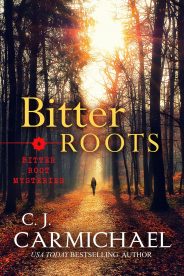 Did you know that Bitter Roots and many titles are available digitally from Tule's own bookstore? Check it out!