Anna Frost had a bad feeling when her twin sister, Liz, told her she’d run off with a member of the notorious Otherworld biker gang, the Blood Ravagers. And her unease skyrockets when her sister subsequently vanishes. The police have no authority and little interest, so Anna decides to take matters into her own hands by infiltrating the group to discover for herself what happened to Liz, where she meets….

Dante, half demon, half human. A mix of two worlds, accepted by neither, he’s had no choice but to learn the hard way how to play whatever side of the fence kept him alive during his nearly 500 years of existence. Now, as second-in-command of the Blood Ravagers biker gang, his survival depends on keeping his humanity a secret. Dante’s ultimate goal is to fulfill the vows he made over two centuries ago to create a world where half-breeds can live in safety and equality.

But when sheltered schoolteacher Anna finds unexpected, white-hot passion in the arms of Dante, will her quest for the truth cost him more than he ever bargained for? Or will they find a way to save Liz – and their love – together?

Anna Frost stared at the worn wooden sign as she drove into the small frontier town.

Halfway down the main drag, she pulled her compact, rental car up to the curb and cut the engine. Her destination stood on the corner—a ramshackle, two-story cinder block building with a walled-in rear courtyard. The place looked more like a fortress than the simple bar she’d expected.

A low growl rumbled closer and she glanced into the rearview mirror. Four gleaming motorcycles approached, all of the riders were big and muscled. One guy was bald with a beard, one with a cowboy hat and black duster coat, one with a mustache and a Hell Rules bandana tied around his head, and one with a shadow of stubble defining his chiseled jaw, his eyes hidden behind aviator shades.

Stubble guy glanced toward Anna as they drove by, his long dark hair blowing in the breeze. One side of his full lips quirked into a small smile and her breath hitched, a strange pressure building low in her core. He sped away and she damned near raced after him before she stopped herself.

She was here to get information about Liz, not find a date.

Ahead, the bikers parked their cycles and went into the bar. Trouble was, this place wasn’t an ordinary pub. It was home to the most notorious outlaw organization in the country, let alone tiny little Salvation, Wyoming.

Notorious not because of its deeds—though those were bad enough, if the rumors were believed—but notorious for its members.

Settlements of otherworlders weren’t that uncommon these days, not since the Great Revelation took place nearly a decade prior. It had been a time when all the other species living amongst humans finally made their presence known. Overall, the so-called monsters kept to themselves. They even had their own governing body, the Council, who made their laws and administered otherworld justice when said laws were broken.

The world continued on as usual.

Here, according to her research, the Wild West was alive and well and had become a seething cesspool of illegal mingling between humans and all sorts of dark creatures.

News of vamps and demons and shifters existing alongside mankind hadn’t exactly been shocking to Anna or her twin sister, Liz. Honestly, given their rather odd upbringing, she’d never judged anyone for their lifestyle choices or their genetics—despite the fact everyone seemed happy to categorize her as a lonely schoolteacher who devoted her time to her fifth grade class and the occasional rescue cat who adopted her.

They had no idea who she really was.

Things that had driven her to choose the normal, the sedate, the vanilla…

Anna opened the car door then shivered as a cool breeze trickled in. She should’ve brought a sweater, but it was August. The temps were usually warmer.

More motorcycles roared past and the sour smell of exhaust jarred her back to reality. She smoothed her shaky hands down the front of her jeans and patted the bobbed auburn wig concealing her blond hair.

Identical in appearance yet polar opposites in personality, she and Liz were two halves of the same whole. Without her sister, she felt like a piece of her was missing. And yes, maybe Anna had taken to cutting her forearms again in order to feel something, anything, other than the endless, soul-sucking guilt her sister’s disappearance had caused. That didn’t make her a bad person. It was her past deeds that had condemned her years ago.

She tugged the long sleeves of her plain black T-shirt lower, the sickening tension inside her coiling tighter. If Liz had somehow ended up in that bar with those mercenaries, then God help her, because local law enforcement wouldn’t.

Wind whistled and she blinked hard. She’d worn brown contacts to hide her unusually colored eyes—one green, one blue—and squinted into the bright sky above. There had to be at least twenty bikes parked out front now, along with several groupies sporting skimpy skirts and stiletto heels.

From a rickety overhang, the bar’s rusted sign swung on its chains. Known simply as Seven, the place had been raided more times than Afghanistan, but still the gang of mysterious outlaws persisted. Internet legends said the bikers paid hefty bribes to the Council to keep their lair open and secure. Whatever the reason, human law enforcement had bailed on Anna at first mention of the club, leaving her with little choice but to investigate herself.

The last time she’d spoken with Liz, her sister had gone on for hours about this place and the mysterious new man she’d met—someone she’d refused to name but described as “magnetic as the full moon and twice as seductive”.

At the time, Anna had assumed the fascination with this new stud-du-jour would burn itself out, like every other crazy obsession her sister had delved into over the years. Palm readings, Ouija boards, tarot cards, crystal balls, numerology. They’d all fallen by the wayside sooner or later, along with the men who’d conjured said obsession.

Then her sister’s calls stopped.

Not to mention her ever-present mental bond with her sister had gone oddly silent. Anna hadn’t tried to use that bond in years, for good reason. But now that it was gone, it left a black hole of trepidation in its wake and everything pointed to one unsettling conclusion.

Something bad had happened.

Slowly, she made her way down the crumbling sidewalk toward the bar.

Anna’s email inquiries had yielded only one response, from an addict around these parts whom her sister had mentioned by the name of Swifty. And his answer had been nothing but a bizarre warning, “Forget Seven and the Blood Ravagers. They’re terminal.”

Terminal sounded more like a disease than a gang, but she’d assumed it was because the guy was probably stoned off his gourd. After all, it wouldn’t have been the first time Liz involved herself with junkies or illicit substances. Once, in Sedona, there’d been an incident involving peyote and cacti and…

Anna shuddered. She still couldn’t visit the desert after that one.

Poised now at the entrance of Seven, Anna took a deep breath. The ornate brass door handle seemed out of place on the graffiti-covered wood, symbols both ancient and ominous carved into its surface. She traced her fingers over the delicate S-shape of a serpent, pierced by an arrow.

A loud crash thudded against the door, followed by the tinkle of shattering glass and low animalistic snarls. Not exactly the most reassuring welcome in the world, but she only had four days here before she was due to fly back to Atlanta.

It was now or never.

She’d get in, get her information, get out.

Anna creaked open the front door and stepped inside the bar’s cool, dark interior. The door slammed shut behind her, taking with it the sunny world outside. The junkie’s words looped through her mind as her eyes adjusted.

Cigarette smoke clouded the air. Noisy ceiling fans swirled the smell of booze and bad decisions into a huge haze of sinister warning. Behind the bar stood a tall, tanned hunk with shaggy blond hair and violet eyes—a bottle of liquor clutched in his hand, frozen mid-pour. He stared back at her with an oh-shit expression. She scanned the large room. There was all manner of fur and fangs and one dude who appeared to be a fantastical shade of turquoise.

Hands trembling, Anna peered through the murkiness, broken here and there by a few bare bulbs and buzzing neon signs. A rusted yellow square with a red one and a percent sign hung crooked on the wall near her shoulder and an old jukebox in the distance played seventies punk rock on endless repeat.

Like a bad spaghetti western, all activity ceased and everyone’s attention zeroed in on her. Anna’s pulse tripped and her chest constricted, followed by queasy dizziness. She half expected Clint Eastwood to swagger over and ask her to make his day. Her analytical brain searched for rational explanations for what was happening.

All of them seemed perfectly plausible at the moment.

When they were kids, Liz always joked if the twins lived to see the apocalypse, pragmatic Anna would march right up to Lucifer himself and demand to see the battle plans. She would’ve laughed then, if her sister hadn’t been right. Would’ve laughed now, too, if she hadn’t been teetering on the edge of a full-blown panic attack.

Her mouth dried. Cold sweat prickled the back of her neck.

This was a mistake.

Liz knew better than to involve herself here, didn’t she?

Flashes of memory slammed into her mind like machine gun fire. A different crowd. A different threat. A different time when Anna’s attempts to help Liz had gone horribly, lethally wrong.

She backed slowly toward the exit. One step, two. A few more and the outside world beckoned. She could run back to the rental car, start the engine, and get out of Dodge or Salvation or wherever the hell this place was.

Hands fumbling behind her, Anna reached for the door handle, but encountered only warm, hard muscle. She froze, a silent squeak lodged in her throat.

“Who are you?” The voice was deep and rough and thoroughly male.

Her already racing pulse tripled. Through an adrenaline-soaked haze, she somehow managed to detect the hint of an accent. The way he rolled his ‘R’s. European? Italian, maybe?

Anna swiveled slow and stared into the face of a man she’d seen earlier, the biker with the stubble and aviator shades. The sunglasses were gone now, revealing a pair of obsidian-dark eyes, a brief flicker of crimson at their core—there, then gone.

Her universe tilted on its axis. Everything seemed to drift away. Farther, farther, until all that remained was this man. This man, with his beautiful face and fathomless eyes. Anna’s vision tunneled and her consciousness slipped and from the growing black void of nothingness she heard him curse.

At least she thought it was a curse.

His language was low, guttural, violent to the core.

Yet his arms felt warm and gentle as they saved her from crashing to the cold, hard ground.

Blood Bound is available in the following formats: 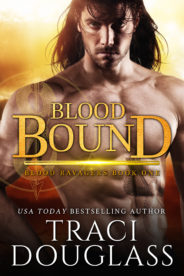 Did you know that Blood Bound and many titles are available digitally from Tule's own bookstore? Check it out!