Bound to the Sheikh

Sheikh Ashim Al Raquar, Crown Prince of Alzaquan, knows he must return to his country and leave his playboy reputation far behind him. It will be a wild journey home, though—he intends to party on his yacht right to the edge of the desert. And then he meets Emily, a corporate flight attendant who’s in the south of France hoping to find herself after years of taking care of her husband.

A sensual, charismatic lover with a reputed dark edge to his bedroom skills is the very last thing Emily needs.

Or is it the first?

He had fought hard for his decade of freedom.

And now, Ashim knew, it was time to make good on his end of the deal.

Sheikh Ashim Al Raquar, Crown Prince of Alzaquan, had, at the age of twenty, refused to marry. It hadn’t just been that he felt too young for such a commitment, his potential brides had all been very young, too. The women deemed suitable to be his bride had also been young. To his father, King Oman’s disapproval, he had negotiated a decade of freedom.

During this time, Ashim worked hard, meeting with foreign dignitaries, deepening international relationships, and he often returned to the land that he loved on official business.

But, yes, away from Alzaquan he partied hard, too.

Thirty years of age had seemed a long way off when the deal had been made.

Now it was here.

Maybe that was why he had hit the nightlife in Cannes so hard—to indulge in a string of decadent flings before duty called him home.

Ashim had arrived back on his yacht in the early hours of the morning, more than a little worse for wear, but the call he had taken from his father, the king, telling him that the plane had been booked to collect himself and his errant brother Khalid had quickly sobered him.

“I’ll make my own way home,” had been Ashim’s curt response.

There was no love lost between he and his father.

Ashim’s mother had died when Khalid was born and there had been no affection or engagement either in the palace or to the people of Alzaquan since then.

Now he stood on the deck of his luxurious yacht and looked, not to the shoreline, but out to the Mediterranean ocean.

At midday he would set sail for Monte Carlo, then Rome followed by Palermo. With stopovers, it would take just over a fortnight to get to Alzaquan and, Ashim had decided, he would hit every club, every casino just to savor every last moment of freedom…

It was about more than freedom though. He had been born to be king and thus raised as such. Ashim’s childhood had been spent being schooled by the elders as to the histories and traditions of Alzaquan. His holidays had been spent in the desert, learning from the land. His had been a cruel and harsh upbringing.

Ashim was a born and bred leader.

So much so, that he could not stand to live under his father’s ancient rules.

Ashim had plans for his country and people and, despite fierce opposition from his father, he was already implementing some of them. His engineering degree meant he consulted on infrastructure and now the main city of Alzaquan was a luxurious metropolis—a successful marriage of ancient and modern had been achieved, despite his father and the elders forebodings.

He looked up to the sky and saw a Gulfstream jet coming into land and he watched its smooth, silver progress and the slight tip to the left as it made its final approach. It was a plane that celebrities often favored and there were plenty here in Cannes for the film festival. The hotels and restaurants were teeming with the rich, beautiful and successful, and Ashim had run more than a little wild.

It was not over yet.

He turned and looked to the shore. A huge marquee was being set up on the beach for a concert tonight and a grand piano was being lowered onto a stage.

Why would he leave now, Ashim thought?

He would have one more night here.

Yes, he would have one more wild, reckless night, here in Cannes, Ashim decided, before he commenced the journey home.

Bound to the Sheikh is currently available in digital format only: 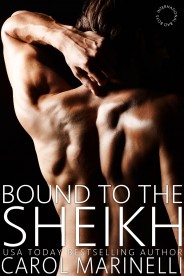 Did you know that Bound to the Sheikh and many titles are available digitally from Tule's own bookstore? Check it out!