What a Bride Wants by Kelly Hunter

What a bride wants…

Ella Grace Emerson adores her father, but he keeps trying to marry her off to every eligible rancher in Montana. When he puts an ad in the paper on her behalf – for a docile house-husband – Ella retaliates with one of her own, pinned to the noticeboard of the local saloon. No husband required, housebroken or otherwise. What she wants is the perfect lover.

What a bride needs…

Newcomer Cam Sawyer is perfectly willing to tear up the sheets with Ella and be her partner in chaos. She wants a bad boy and he’s had experience aplenty. But what she really needs is a strong and loving partner, and until Sawyer stops running from his past he can never be that.

Sawyer’s the one Ella wants. But can he be the man she needs?

Almost a Bride by Sarah Mayberry

Tara Buck has always been the good sister, level-headed by comparison to Scarlett, her flaky, impulsive twin. But when Tara learns her fiancé has been cheating on her with one of his school students, the orderly world she’s created for herself suddenly feels as if it’s falling apart. For years she chose the safe option, but from now on she’s going to live a little, stretch her wings…be a little daring. And if that means acting on the long-suppressed feelings she’s always had for Reid Dalton, then so be it! Reid has wanted Tara from the moment he met her, but she’s always been out of bounds. Not only is she his patrol partner at the Bozeman PD, she’s also engaged. But then her relationship blows up, and Reid finds himself battling his own instinct to stake his claim with the finest, hottest woman he’s ever known.

Even if anything did happen between them, it would only ever be temporary – Reid’s a born wanderer, while Tara’s roots run deep in Marietta. So even if things are good between them, it seems their romance is destined to be short and sweet…

The Unexpected Bride by Joanne Walsh

Laurent Fletcher has to admit his life would be a whole heap better if there was woman in it. His kids are running wild, and his dog is acting crazy; he’s been finding it tough to juggle everything since his wife died, and run his successful custom-built furniture business. But maybe there is a solution that won’t demand any emotional input from him: hire a female to whip his turbulent household back into shape.

Emma Peabody is a British nanny, looking for a new life in the New World. When she arrives at River Bend and finds two small motherless children, a miserable pet and a man who’s placed his emotions in the deep-freeze, she realizes she’s joined a broken family and it will be down to her to put it back together again.

The kids and the dog are easy—all they need are routines and love. Their father is something else. Laurent isn’t about to drop his guard and let Emma work her magic—and it doesn’t help that she finds this dark, brooding man incredibly attractive…

A Game of Brides by Megan Crane

The Substitute Bride by Kathleen O’Brien

Once upon a time, Marly Akers had believed that, for better or worse, people made their own luck…

Marly wonders how she could ever have believed it. Jilted and pregnant, she’s come back to Marietta with her tail between her legs, the blow to her ego huge as she begins working at her family’s small newspaper, the Copper Mountain Courier, and sharing a tiny apartment with her disapproving mom.

Things can’t get any worse. Or maybe they can. Drake Everett, who secretly captured her teenaged heart and then publicly trampled on it, decides to make her re-acquaintance. Though Drake isn’t the sharp, funny, cocky, arrogant rich boy of yore. These days he seems sharp, funny… and supportive and decent, and Marly realizes she could fall for him all over again… if she listens to her heart. But what about her reporter’s head, which has sniffed out a story that paints Drake as the sweet talker she’s always known…?

“It’s for the ranch. It’s your duty. A man does his duty, always.” His father Sam’s words were carved into Cole McCullough’s brain. His responsibilities lay with Rafter M Arrow, which had been in their family for over a hundred years. Even though they were fighting a losing battle to keep the place going.

The ranch always came first, over personal comfort, sometimes reason and definitely women. Sam had seen both his wives walk away, dismissing them as hot-house city girls who couldn’t survive the wilds of rural Montana. So how had Cole ended up making a spur-of-the-moment marriage last year in Reno to TV director Nell, who was as city as they came? Nell was prepared to give it all up to be with Cole. But he knew how it would end: as it had always ended before. It was time to stop living a pipe dream and sue for divorce.

But then Nell came back to Marietta with The Compatibility Game, a reality program, in which couples discovered what they were willing to do for love by living and working at Rafter M, and Cole found himself taking part too…

Everyone in Marietta, Montana, is in love and getting married – at least that’s the way it feels to Andie Bennett the night of the Valentine’s Ball. As she watches the man she’s loved from afar for half her life dance with another woman, Andie allows herself a moment of sheer fantasy as she fills out a stray entry form for the Great Wedding Giveaway. Andie channels years of fantasy and yearning for Heath McGregor onto the page, but she never intends to actually enter the Giveaway. Only a crazy woman would do that. But fate has other ideas….

When Heath learns he and Andie are last minute finalists in the Great Wedding Giveaway, he’s completely baffled. How on earth could anyone make such a ridiculous mistake? When it becomes clear that Andie will be humiliated if the slip-up becomes public, Heath does what any good friend would – he suggests they pretend the engagement is real until the Giveaway is over and then quietly “break up” when no one is paying any attention. It’s the perfect solution, except Heath very quickly realises that pretending Andie is his is no hardship at all. In fact, it may just be the best thing that’s ever happened to him… 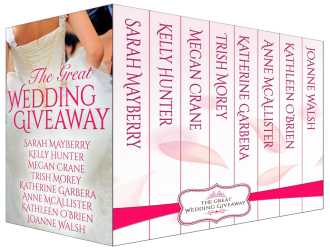 The Great Wedding Giveaway is currently available in digital format only: 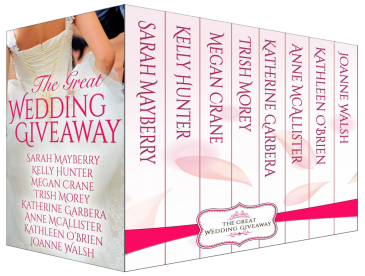 What a Bride Wants →

A Game of Brides →