The squid was excellent, melt in the mouth tender with just the right amount of spice. Her thoughts, even spicier. She put her knife and fork down knowing she’d burst if she didn’t ask.

‘Can I ask you something?’

‘Sure.’ He was feeling mellow. He had an cold beer and a damn fine hamburger and the prettiest woman in the pub sitting opposite him. Right now he would have agreed to the sun not coming up in the morning.

‘Why did you choose me?’

‘Back in Bella’s – why me? I muffed my lines and stood there staring at you with my mouth open looking like a goldfish. I thought for sure you’d choose Jasmine.’

He frowned ‘You mean the Asian girl?’

‘Yeah. Why didn’t you choose her?’

He considered his hamburger for a while. ‘Because she was tiny.’

‘I know. She was exquisite.’

Mitch looked up at her. He’d knew that kind of “oh”. It was loaded. Clearly he’d said something wrong.

‘And you looked cute.’

‘Thanks, but you don’t have to do that.’

‘Try to make me feel better by pretending you were interested in me all along.’

Bam, there it was. ‘Who says I was pretending?’

‘Me. You’re just saying that to make me feel better. You wouldn’t choose Jasmine because she was tiny. And so you chose me because I wasn’t.’

He put his hamburger down. It was his favorite, one with the lot, complete with onion, salad, bacon, cheese, beetroot pineapple and pickles, so it was a tough task, but still he put it down, because he’d just made a discovery, and he wanted to ruminate on that for a while. Because it seemed to him that even when a hamburger was complicated, it was still simple. There was a lot to be said for a hamburger. A hamburger might come with pickles, or sesame seeds on top, but it never came with a Catch 22.

‘I swear I will never understand how a woman’s mind works.’

‘Then you’re not really trying,’ she said.

He sighed. ‘So how about I just have a thing for red heads?’

‘Uh-uh. I’m not falling for that one. You know it’s not really red and now you’re just trying to make stuff up.’

‘So maybe I have a thing for women in corsets and pink boots.’

That was probably closer to the mark. ‘You mean, wearing nothing else but?’

‘You remember the pink bows?’

Did she really think he’d forget? ‘You’re kidding me. I do believe those pink bows were the ruination of my sleep for these last two nights.’

The slow burners inside her kicked on. Who needed alcohol when you were sitting opposite the man who kept you awake and wanting into the early hours, who’d just admitted she’d done the same to him. ‘Tell me, why do we need two rooms here in Kalgoorlie when we’ll be sharing only one in Broome?’

‘You know why. Because sex was never part of this deal.’ He paused. ‘And because up in Broome we won’t have a choice if we want to look convincing.’ She liked that he didn’t sound too thrilled about it.

She angled her head. ‘You know, I’ve been thinking about that convincing thing, Mitch,’ and across the table from her Mitch didn’t move a muscle. ‘We’d be far more convincing in front of your friends if we were an actual couple.’

He jacked up one eyebrow. ‘You think?’

She smiled, their eyes locked, green with blue, flickering at the edges with heat. ‘I know. New lovers are just so convincing. They can never keep their hands off each other.’

She liked the way the fingers of his hands curled on the table. Liked it that he probably didn’t even realise he was doing it. ‘It’s your choice, Scarlett,’ he said, his blue eyes as heated as a gas flame. ‘This time you get to choose.’ And his voice was husky and low and thick with wanting and she had a burning desire to hear it from the pillow next to hers.

‘Mitch Bannister,’ she said, taking his hand, ‘I choose you.’

And for the first time in his life, Mitch Bannister failed to finish a hamburger with the lot and chips.

But only because he had more important things to do.

Second Chance Bride is available in the following formats: 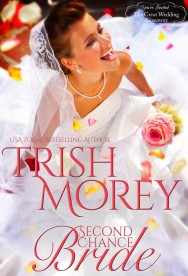 Did you know that Second Chance Bride and many titles are available digitally from Tule's own bookstore? Check it out!