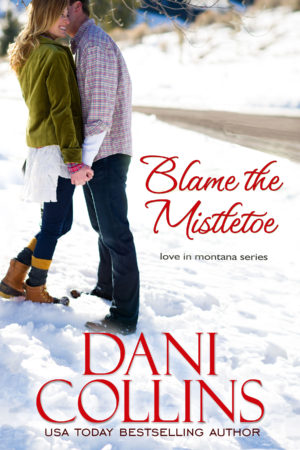 Liz Flowers has never enjoyed Christmas, but this one is shaping up to be the worst by far. She let her ex take her daughter to Mexico while she stays behind in a strange town, sitting her former mother-in-law’s high strung little dog. It’s an opportunity to meet new people, but this California girl doesn’t have much in common with the ranchers in small town Marietta.

Blake Canon perks up with male interest when he sees a new face at his friend’s Christmas cocktail party. His son is away and a light affair would take his mind off his financial troubles. Then he realizes he knows Liz. She was once married to the brother of his ex-wife.

Their children might be cousins, but Blake and Liz do the kissing—under the mistletoe. It’s the beginning of a new view of Christmas for Liz, but when their children arrive home unexpectedly, and family secrets are revealed, Liz isn’t sure she’ll stay in Marietta for Christmas after all.

Of course, Blake was quite a catch himself, stepping into the foyer so tall with snow dusting the shoulders of his worn sheepskin coat, wearing a cowboy hat now. His gaze clashed into hers like he’d been looking for her before the door had opened.

Such a lovely, fanciful thought.

“Uh oh, Liz. You have a decision to make,” Skye said, pointing above Liz’s head.

“The girls made me hang it,” Chase said from behind her, referring to Skye’s nieces who’d been running around with the rest of the children this evening.

Her gaze caught Blake’s on the way down from the little sprig and her heart skipped at the light in his eyes. Her brain grasped for a smart remark, but nothing came.

Blake stepped into her space. “I think we owe it to ourselves,” he said. “Don’t you?”

Swaying, she set her hands on the cold, brushed texture of his coat, feeling ridiculously small and girlish all of a sudden. “Because of our mutual experience with the Flowers?” she asked.

“Actually . . . ” His gaze narrowed as he stared at her mouth and started to lower his head. “Let’s not think of them at all.”

His mouth touched hers and wiped her brain clean. All she knew was the brush of cold lips that warmed against hers, pressing firmly enough to open her lips so the kiss was not nearly so chaste as it should or could have been. He lingered, waiting until temptation got the better of her and she kissed him back, letting her mouth cling to his, then he slowly drew back. Something satisfied flickered in his eyes.

That had been bad. Good in a way that was very, very bad. Liz could barely breathe or muster a smile.

Skye and Chase smirked at each other. Someone from the lounge whistled. Liz rolled her eyes, feeling herself blush.

And Blake didn’t bother to hide the male smugness in his gaze as he took the leftovers from Skye and opened the door for Liz.

“You need better boots,” he told her, gripping her elbow as she tiptoed across the drive to the battered truck that was swept of snow and sending out a cloud of white exhaust. “You never would have made it home in those.”

They weren’t going to talk about that kiss then? Good.

“I saw some in town. I’m just being cheap. It seems silly to buy boots I’ll only wear for a few weeks.” There. That had been a nice opportunity to remind him there could be nothing between them. Subtext was her major, thanks to the tension Major Bloom had brought into the house every time he came home.

“You’ll need them at the ranch,” he said, bracing the truck door with his elbow so he could use his free hand to help her up and in.

Jerking her head to look at him as she seated herself, she found herself eye to eye with him in the shadowy glow of the houselights. Snow sprinkled his hat and shoulders. He wasn’t smiling. He was serious.

Apparently, they were talking about that kiss.

Blame the Mistletoe is available in the following formats: 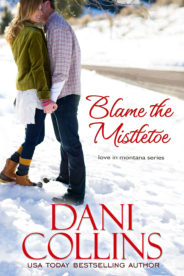 Did you know that Blame the Mistletoe and many titles are available digitally from Tule's own bookstore? Check it out!