“I need the parent volunteer forms so I can drive students and help with school events,” he added.

Her butt tingled and her stomach swooped. Don’t, she thought. The last thing she needed was to start imagining he’d been checking her out. Hot and hating herself for it, she set the forms on the counter near his elbow.

“I need a copy of your driver’s license,” she told him.

He reached into his back pocket, the move drawing her eye to the way his T-shirt strained across his shoulders and pecs. Dear Lord, he was beautifully built. Were men allowed to have lean muscles like that without carrying a license for them as deadly weapons?

He offered the card in two fingers. Something in the way he did it made her lift her eyes to his. His brows went up ever so slightly.

He’d noticed her checking him out.

She snatched the card from his grip and boiled with self-consciousness as she turned her back on him to make the copy. If he was looking at her backside again—but why would he? She didn’t want him to, did she?

What was she doing with her life that she was going off the rails like this? She was basically a happy person. She didn’t have self-destructive thoughts so why would she long for a spark between her and someone who would devastate her in all the ways Terry hadn’t? It was crazy. Literally not sane or logical.

She took the photocopy to her desk and slapped it into her In tray, refusing to look at his photo even though she was dying to. She’d finish processing this later, after he’d filled out the forms. Sitting down, she set her fingers on her keyboard, determined to carry on with her day and be normal.

He continued to stand at the counter, watching her expectantly.

“Can I have my driver’s license back?”

Oh for God’s sake. Blushing hard, she shot to her feet so fast her chair rolled back into the filing cabinet with a crash. Get a grip, Skye. She scooped the card from under the lid of the copier and when she slapped it on the counter, she only dared lift her gaze high enough to see he was biting back a grin.

“Look, I know my being who I am made this worse—”

“Oh, no, my life is great,” she snarked, managing to keep her tone a level under shrill. “Isn’t it everyone’s dream these days to be an internet sensation? Give the forms to Max when you’ve filled them out. He can leave them in my tray.” Never come back here again, she willed him.

Then felt inexplicably sad, but honestly. This fixation needed to be carved out of her psyche and cryogenically frozen for a future generation to deal with.

“Hey, I didn’t post that clip. And for the record, I was being sarcastic last night. I know you can’t turn people gay.”

“Sure about that?” she shot back, once again finding herself pushing back for the simple reason that he had the gall to say to her what no one else had. “Wanna put it to the test?”

The smoky look in his eyes, the deeply male timbre in his tone, crashed over her like a tropical wave, softening her bones and put a tickling feeling deep in the pit of her belly. A type of yearning.

One that was beyond misguided. Look who he was. He was mocking her. Had to be. Probably because he wasn’t any happier than she was about the way she’d embarrassed him.

“That’s not funny,” she told him. “It’s mean.” And then, because the backs of her eyes were sizzling, she went into Brenda’s office and shut the door.

Hometown Hero is currently available in digital format only: 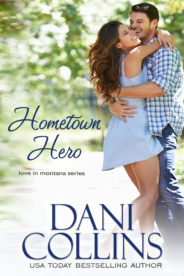 Did you know that Hometown Hero and many titles are available digitally from Tule's own bookstore? Check it out!