Cookbook author Marley Chambers can’t think of a more festive way to spend Christmas than at a friend’s holiday wedding in her hometown of Magnolia Bay. If only her soon-to-be ex-husband, all-star pitcher, Beckett “Beck” Chambers wasn’t bringing his new girlfriend—and if only he wasn’t still the sexiest man to ever walk out onto the mound…

Beck never wanted the chaotic life of a sport star—especially not at the cost of his marriage to the only woman he’s ever truly loved. But his career is a runaway train—and he’s afraid it’s too late to hit the brakes.

But when a mix-up leaves Beck and Marley stranded together for Christmas Eve on the barrier island where Beck proposed years before, old memories burn bright—and sparks fly hotter than a bonfire on the beach.

Could the magic of the season bring the gift of a second chance, just in time for Christmas?

Marley covered her face with her hands, exasperated. God, men could be so dim! “I never wanted the bartender, Beck—I wanted you,” she cried. “I always wanted just you. You’re the one who couldn’t wait to start dating again!”

“If you didn’t want me dating again, why did you ask for a separation?”

“Because I was tired of feeling badly for needing something for myself, my career,” she said. “Because I thought would be easier to be alone, and that I’d eventually stop caring about you. But the truth is, Beck, when I see you with Denise, it hurts so much I think I could die.” Marley wasn’t even aware she’d started crying until she felt the tears slip down her cheeks. “And I keep waiting for when I won’t care, when it won’t hurt to see you with someone else, but I’m not sure it ever will. And I don’t know what to do about that.”

Before Marley could speak, before she could even take in a breath, Beck took her face in his hands and covered her mouth with his in a deep, hard kiss. If not for the support of the window ledge, she might have melted to the floor. But she was melting, against him, into him. As his arms came around to pull her in closer, tighter, their kiss grew hungry and wet. The taste of him filled her mouth, the roughness of his unshaven jaw prickling her cheek, her throat.

She pulled away, just enough to whisper, “We can’t.”

“Why not?” he whispered back.

“Remind me.” His hands continued to move over her body, around her back to find the latch for her bra. “I think I forgot.”

“I’m pretty sure we could make it harder.”

Snap. There went her bra.

“So am I.” His voice was rough with desire. “Seriously about to take you up those stairs.”

She felt her bra slide off her shoulders. “It’s too complicated.”

“You’re right—I should just bring a mattress down here.”

She gave in to a helpless smile. “You know what I mean,” she said, trying to be firm and failing miserably, “—and stop doing that.”

“What, this…?” His hands were on her breasts now. “…Or this?” he asked, rubbing insistent circles over both tips with his thumbs.

Dueling jolts of pleasure rocketed straight to her core. “Yes—I mean, no.” She swallowed, losing her ability to think straight. Her limbs felt like cooked pasta—she wanted to wind herself around him like a vine.

“What about this?” His palms rode across her stomach and slid down her underwear, cupping her bare ass and sliding his fingers between her cheeks. “Or maybe you’re not sensitive here anymore?”

She sucked in a sharp breath and dug her nails into his back.

She pressed her lips against his ear. “You better get the bed.”

A Very Married Christmas is available in the following formats: 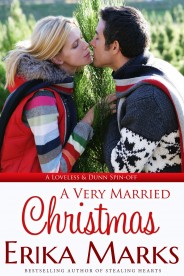 Did you know that A Very Married Christmas and many titles are available digitally from Tule's own bookstore? Check it out!