Adirondack girl-in-transition Jade Engel comes home to recharge after ending a career she never truly wanted, but soon realizes she’s in danger of also being swept off her feet by the boy-next-door, her former best friend, Ben Stephens. If only he’d stop kissing her every time she falls into his arms.

Everything local celebrity Ben Stephens ever wanted is in Starling. Then Jade comes home after an eternity away and sends his simple world into a tailspin. He’s determined to pursue her—the one girl who got away. But when their friends-with-benefits arrangement blows up in their faces, will they have the courage to put their pasts to rest in order to forge a future together?

Ben reached into the box for a new candle then stopped. “Remember that time we were climbing that big old willow tree at the edge of Robinson’s property and that branch broke?”

“I still have a scar between my ribs from where I landed on that sharp rock.” Jade shuddered. “I couldn’t breathe, and…you half-carried, half-dragged me to their house to get help.”

“You were turning blue.”

“All I remember was thinking I couldn’t take a breath. Next thing I knew I was lying on a blue velvet couch and I thought I’d died. But then I saw you sitting across from me, those big green eyes staring at me. You looked so scared.” She picked up the remnants of the broken candle and placed it in the tote bag slung over her shoulder. “I was lucky.”

She laughed. “Still, we had some great adventures.” Her voice trailed off. Why had she thrown away their friendship? They had been inseparable. He had been the one person who accepted her as she was and encouraged her to follow her dreams. He didn’t care that she hated the color pink, and loved to climb trees and play in the dirt —unlike most girls in Starling. Her throat tightened and she searched his face for a hint of her former best friend, unspoken yearnings growing inside her.

He cursed and pulled her close, wrapping his strong arms around her.

“Ben?” Her protest sounded more like a plea, everything else slipping away but the desire to be close to him. She reached up and pulled his head toward hers.

She wanted him. He wanted her.

And they both knew it.

His lips were hot and wet on hers, seeking she-didn’t-know-what and bringing her along for the mysterious ride. It was too overwhelming, too confusing, too risky.
I have to stop…

“No.” She unthreaded her fingers from his thick hair and pushed against his shoulders.
He lifted his mouth from hers, a question in his eyes.

She dropped her head against his chest and listened to his racing heartbeat. It matched hers. We can’t do this. Her mother had warned her away for a reason. He wasn’t married like Alex, but he surely had secrets that could destroy her just as easily. She looked up. “I’m sorry.”

He nodded, wiping his mouth with the back of one hand before reaching out and tipping up her chin so he could look in her eyes. His words were soft but filled with intent. “I want you. That’s not going to change. Let me know when you’ve figured things out.”

She leaned back against the turret room’s floral wallpaper, slid down the wall to sit on the gleaming wood floor, a boneless, miserable pile. She rested her head in her hands, her legs splayed in front of her. “I’m too tired to think.”

He crouched next to her and placed a hand on her knee.

The heat from his palm seared her, spreading warmth from her knee to her inner thighs and beyond. Part of her didn’t want the delicious sensations to end, but logic warned that giving into this could only cause them hurt—and they had both hurt enough.

She dropped her hands. “I knew coming home would cause memories to resurface. I guess I just underestimated how many. I’d hoped it would bring my life clarity, but—” she twisted her hands in her lap, “I’m more confused and conflicted than when I arrived.”

He sat back on his heels. “Yeah, the past has a way of haunting us when we least expect it.”

He turned and sat next to her, his back against the wall. “What’s haunting you?”

Christmas Light is available in the following formats: 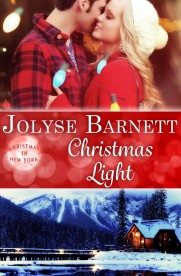 Did you know that Christmas Light and many titles are available digitally from Tule's own bookstore? Check it out!