He’s seen too much and failed too many times. Now the homeless kids he mentors are dying and the only person who can help him find the killer is the woman who dug up his past to destroy him. Dev needs her help to solve the case, but he can’t trust her and he can’t trust himself around her, because she’s the sexiest, most intelligent woman he’s ever met.

Journalist Reghan Connor knows there are no heroes, and she’s out to prove it on the air for all of New Orleans. Her latest debunked hero is Detective Dev Gautier, who hates her for exposing his mistakes. Now Reghan has been given the key to the murders of Dev’s homeless teens, but how can she convince him she’s not setting him up for another fall? As they work together to solve the murders, Reghan learns that being a hero is complicated and loving a hero can be downright deadly.

Dev propped a shoulder against the closed bedroom door, trying not to picture Connor undressing. He knew the first thing she’d want was a bath, and he was waiting to show her where the towels and shampoo were kept. He tilted his head at a soft sound coming from inside the room. Was that crying? Nah. Connor wasn’t a crier. The sound morphed into a low growl. What the— “Connor?” He knocked on the door. “You okay in there?”

She didn’t answer. He gripped the knob and turned it. There were no locks on any of the doors at the center. “Hey, everything all right?”

A strangled moan answered him. He pushed the door open and peered around it. Connor’s head was down and she was rubbing at the metal brace on her palm. Both hands were unsteady.

She looked up. Her face was streaked with dried blood. Her hair was tangled, her eyes were a little red and puffy. His heart wrenched and he almost went to her.

But her chin was high and her gaze was stony. He knew that look. She wouldn’t welcome sympathy and comfort. He found it staggering to watch how hard she worked to maintain her tough exterior. He wondered if she knew that she wasn’t fooling anybody—certainly not him.

Her chest rose and fell as she took a couple of deep breaths, obviously trying to calm down. Beneath her blouse, he could just make out the lacy bra that cupped her perfect breasts. He hadn’t forgotten how firmly they’d pressed against him when he’d kissed her that first time. From there it was a short trip to the memory of the shape of her body. He knew how narrow her waist was because he’d wrapped his hands around it. He knew how her slender body felt molded against his. Damn it. He’d let his thoughts go on a second too long. He was becoming aroused just from looking at her, just from thinking about her.

Desperately, he drew on the detachment that made him a good detective.

“What’s going on, Connor?” he asked firmly. “Are you hurting? Are you sick?”

Oh, God. Her eyes were shiny with tears. A pulse beat rapidly in her throat. He could tell she was holding hysteria at bay with nothing but a slender thread of will.

“I’m fine,” she said flatly, obviously striving for the cool control she usually displayed. “I’m just having a little trouble un—unbuttoning my—” She cleared her throat, holding up her bandaged hand, and pressed her trembling lips together in a stubborn moue of frustration.

He stared at her for a second, at a loss for what she wanted him to do.

She waved her hand in a shooing motion. “Go,” she said, her voice quivering and thick with held-back tears. “I’m fine. I can do it.”

He eyed her blouse. Those buttons were really tiny, and there were a lot of them. Why anyone in their right mind would wear something as impractical as a blouse with a dozen buttons on it—and then make it practically see-through. Clearly, a device intended to torture men. He gestured toward the door. “Why don’t I—call Penn?”

“No,” she said quickly. “Please. Don’t bother her. She told me she has a big test tomorrow. I can do it. Really.” She tried again, but the metal splint and her trembling fingers were useless on the little buttons.

Clenching his jaw, Dev stepped closer and brushed her fingers aside. “Someday you’re going to have to admit you can’t do everything, Connor.” He fumbled a bit, but he eventually got all twelve buttons undone, managing to graze her breast only once in the process. But that one time, her nipple immediately sprang to attention and scraped erotically against his hand. His body reacted to the sight and the sensation. And just that quickly, his determination lay in jagged shards on the floor. Now his hands were shaking with the effort to resist dragging her to him and kissing her.

Thank goodness she stood there tall and rigid as a fence post until he’d finished with the last button. Because manipulating those buttons required that he stand way too close to her. And if she moved, even a little bit, she’d know, down to the inch, exactly how tall and rigid he was.

No Hero is available in the following formats: 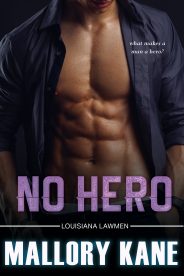 Did you know that No Hero and many titles are available digitally from Tule's own bookstore? Check it out!