Carina Chapman wants a vacation.  Somewhere hot. Somewhere decadent. Somewhere far, far away from her complicated life in New York. Somewhere in Australia appears to be the answer, until Carina discovers her PA has booked her into the wrong resort.

Cowboy Jake Richardson can cook a mean camp-oven roast, track wild horses, breed cattle and knows Australia’s rugged High Country like no other, but he needs to diversify if he wants to keep his land. Tourism seems like the answer, but his housekeeper just quit, the rooms aren’t ready and he doesn’t know a short black from a cappuccino.

Then his first guest arrives.

City slick Carina is smart, classy and disgruntled that her dreamy five-star retreat has been replaced by a rustic homestead beside the Barcoo Creek. Jake has seven days to convince Carina he can deliver all the items on her vacation checklist – including the five-step method to an everlasting relationship…

“Sorry about this. It might take a while before we’re on the road again. The exhaust line has busted.”

“So what do we do now, call roadside assistance?” said Ree. She was serious.

Her host opened and closed his mouth. Appeared dumbfounded. Looked around at the isolated spot where they were stopped and said, “Ummm, no, we’re miles from anywhere…”

Ree could feel panic rising. They were going to die. She could see the headlines in the paper now, “US Tourist dead in Australian bush due to no AAA.”

Jake was still talking, “… roadside assist out here is all about fixing it yourself.”

“It’s an exhaust, Jake. It’s not something you carry around like a spare tire!” For goodness sake. They were doomed!

The man laughed. He laughed! Couldn’t he see this was serious!

“No, but it’s amazing what you can do with a can and some fencing wire. In the meantime just sit there and relax. Soak in the bush scenery.”

Yeah right. They’d bumped and thumped their way across ridges and down through gullies not seeing anything other than boring grey-blue trees for what seemed like hours until the truck started to make noises. She was bored out of her brain, had a headache and was greatly regretting saying yes to this jaunt even before the mechanical breakdown. And now she was going to die.

“Carina? If you need to go to the toilet, do so but stay within earshot. We’ve been having a wild-dog problem and they’ve been getting game lately.”

“Game? As in killing other wild animals?”

“No. Well, yes, they kill other animals but what I mean is they might stalk you.”

“No need to be worried though. I’ve got my gun.”

Right. So she could be standing there with her pants down doing her business and Thor here could come with all barrels blazing to save the day like a futuristic John Wayne. No freakin’ way! She reminded herself to breathe. Appear all calm and collected and not on the verge of hysterics. Which she was!

Jake grinned, “Suit yourself but it’s nothing to worry about really. Just thought I’d better warn you.”

Wild dogs, snakes. What else was there to scare the G-string off her in Australia?

“Oh, and be careful of drop bears.”

“I’ve never heard of those.”

“Yeah, they drop out of trees, have big claws and fangs. Make a right mess of you. Vegemite helps.”

“Vegemite?” Ree voiced hitched a little. She calmed it by sheer force of will. “You mean that poisonous looking black stuff you guys put on your toast?”

Jake laughed. “Yeah, that’s the stuff. If you put it behind your ears, they’ll leave you alone.”

That black tar stuff kept carnivorous animals away? She knew it looked suspicious the minute she saw it slathered on Jake’s bread.

“Or drink rum. Specifically Bundaberg rum. They know you’re a real Aussie then, so they don’t touch you.”

Hang on a minute … Ree glared at Jake. “You’re pulling my leg, aren’t you?”

“That just leaves the wild dogs and snakes. Terrific. I think I hate Australia.” Ree could feel tears welling, which was down right ridiculous. Since when had she been the wailing type?

Her host sobered. Put out a hand to touch her arm. “No, please don’t cry. I’ll get us out of this Carina, I promise. And I’ll make sure you love our beautiful land by the time you leave.”

He stared askance at a tear running down her cheek. “Ree, it’ll be okay.”

She dashed the renegade drop away with an impatient hand. “I’m not sure I believe you, but then again, I’m only used to city dudes. They could fix a share problem with a click of their fingers but not this,” she flailed around her hands, “mechanical thingy.”

“I’d better prove it to you then,” he said, with one last long look at her eyes.

The Cowboy is currently available in digital format only: 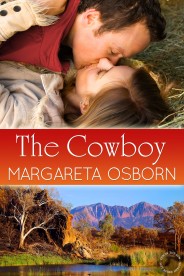 Did you know that The Cowboy and many titles are available digitally from Tule's own bookstore? Check it out!