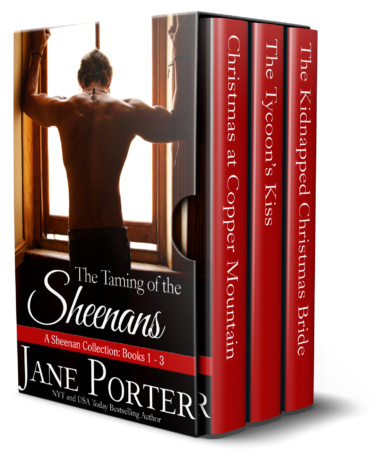 Part of the Taming of the Sheenans series

The Taming of the Sheenans: Books 1-3

After a set-back, Harley Diekerhoff led a quiet life and kept to herself. Taking the temporary job at the Copper Mountain Ranch as widower Brock Sheenan’s housekeeper seemed perfect for her. But her calm cocoon is invaded with the arrival of Brock’s pre-teen twins, Mack and Molly, who’ve never experienced a proper Christmas.

Annoyed at first by Harley’s interference, Brock is secretly pleased she’s changed his tiwns’ world. It doesn’t hurt that he finds Harley incredibly attractive, fierce, smart and passionate. It’s also an added bonus that she’s not afraid to challenge him and get his blood heated! But when sparks fly and the attractions sizzles between them, Harley’s not so sure she can handle something permanent with this dark, taciturn cowboy who doesn’t know how to let her in.

The Tycoon’s Kiss by Jane Porter

All he wants is a Christmas memory…

Trey Sheenan has cultivated his reputation as Marietta’s resident bad boy, until one day he lets things go too far and he loses everything—his freedom, his fiance McKenna Douglas, and his infant son.

McKenna has loved Trey since they were kids, but she’s had enough. When Trey is sent away for five years, McKenna is determined to do what’s right for her and baby TJ, which means putting her mistakes—namely Trey—behind her, and move on.

When Trey is released early, he returns to Marietta determined to beg McKenna’s forgiveness and become the father TJ needs him to be, only to discover that he’s too late. McKenna’s marrying local insurance agent Lawrence Joplin in a candlelight Christmas wedding.

Once again, Trey risks everything, but this time it’s for love….and the memory of one perfect Christmas together as a family. 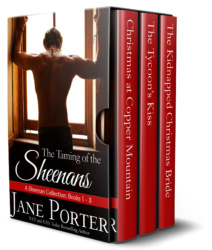 The Taming of the Sheenans: Books 1-3 is currently available in digital format only: 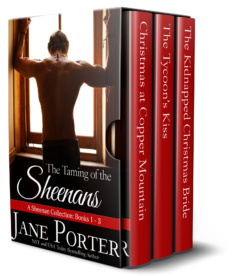