The darling of the Aussie small screen, Edwina Calloway, has always had a thing for her ex co-star the hunky Justin Wilde – even before he took off to Tinsel town and became a Hollywood heartthrob. And Justin always had a thing for her. Except she was married so neither of them ever crossed that line. But now Justin’s back in Oz to take part in a celebrity car rally with Edwina riding shotgun and she isn’t married anymore…

It seems the entire country is holding its breath for their much vaunted reunion. Can they survive a five day road trip, just the two of them alone in the car under intense media scrutiny without finally getting naked and doing the Wilde thing? And if they can’t, what happens when Justin heads back to Hollywood?

Edwina Calloway stared at the long, tall streak of sex-on-a-stick striding towards her through the harsh sunshine and swirling dust and knew she still had it bad for Justin Wilde.

The man had been on the other side of the freaking planet for two years but he obviously still had her ovaries in his back pocket.

How she was going to drive from the Victorian Highlands to Byron Bay – five whole days trapped in a car with him – and not tear all his clothes off she had no idea.

How she was going to smile and politely kiss his cheek in front of all these television cameras and telephoto lenses and not grab his face and stick her tongue down his throat was a more immediate concern.

He stopped to shake a couple of hands, air-kiss some faces, share a joke or two along the way, but Edwina was aware, in the same way she’d always been, that she was his sole focus.

That wasn’t ego, it was just fact.

His intense, blue gaze had sought and locked with hers through the windscreen as he’d driven into the dry paddock of Barcoo Creek Bush Resort strewn with fancy cars and even fancier people. From the second he’d climbed out of his spearmint-green, classic 1975 Holden Monaro, she’d known she was in his sights, that she was his end goal.

They should have just gotten naked and done the wilde thing years ago, gotten the crazy urge that besieged them whenever they were in close proximity out of their systems. Maybe there wouldn’t still be this feeling of unfinished business between them.

But yeah… her being rather inconveniently married and all had put the kibosh on that.

Neither of them had crossed that line. Not outside of work anyway. In front of a camera, sure, she’d kissed him a hundred times, been about as naked as was possible without actually being naked on a couple of dozen occasions.

But that didn’t count. That was acting. It was fake. It was their job.

His eyes were back on her again as he broke away from his last well-wisher. Everybody’s eyes, not just the clutch of media, it seemed were on her.

Edwina was used to being stared at by cameras and fans, but not by these people. They were her tribe. Her peeps. Her friends and colleagues. Fellow actors, industry people, network representatives who were used to famous faces and understood the toll of public scrutiny.

But today they were clearly as curious as the public about this much vaunted reunion.

Edwina held her ground on the veranda, despite alternating between wanting to run away and wanting to throw up.

She did neither. But it was a close call.

The cameras are watching, Eddie. That’s what Dale would have said, had he been here. Smile, flirt, pretend. Give them what they want.

Why it had taken her so long to divorce his ass, she had no idea.

Another voice whispered instructions in her head – Aiden Farley one of the show’s producers. Play nice with Justin. See if he’ll come back for a couple of guest spots. The ratings could really do with some GrOwen magic.

Ugh! She hated that term coined by the show’s fans.

Yes, Grace and Owen’s on-screen chemistry had been off the charts and had kept the fans coming back for more but that intense fandom had put a lot of pressure on Edwina and Justin.

Edwina watched as he drew closer, his designer blue jeans casually scruffy like he’d just rolled out from tinkering under his car. They clung to his hips and moved interestingly against the long, lean muscles of his thighs. A slight breeze blew his plain, loose-fitting, dark grey t-shirt against spectacular abs. Abs she knew intimately, from their sculptured hardness to the light dusting of hair.

Justin had always worn clothes well, but now he wore them with all the panache and sexiness of the bone fide Hollywood screen god he was.

A hush fell over the crowd as he prowled towards her, his laser-blue eyes locked on hers, still as mesmerising as always.

His feet landed on the veranda of the rough-hewn mountain hut and Edwina’s pulse spiked. She’d forgotten how overwhelmingly male he was. In two of his effortlessly long strides he was reaching for her.

Edwina would have like to have resisted, to have stuck her hand out to be shaken, halting his trajectory. But she’d never been that strong around him and she was supposed to be playing nice, playing it up for the cameras.

“Hello Jus,” she murmured as she slipped into his open arms.

And it felt good. So damn good. Just like old times. Resting her cheek on his chest just above where his heart beat a steady tattoo. Leaning on him. Breathing him in. Wanting him.

The familiar, low twist in her belly that craved something more did its usual thing.

“You look good,” he said, pulling back slightly, lifting his hand to push an errant blonde lock back from her face.

Edwina was conscious of his thighs, warm and powerful against hers and of the cameras clicking, recording, as she smiled back at him. His fingers brushed against her temple causing a localised flutter and a systemic tsunami at the same time.

He’d changed but he hadn’t. Like her, he was only thirty-two, but there was some grey in the close-cropped back and sides of his light brown hair and there were some crinkle lines around his eyes. But there was no salt in the pepper of his perpetually scratchy jaw and his blue eyes still sat atop two perfectly chiselled cheekbones.

He twisted a long, blonde curl of hers around his finger. “I’m so sorry to hear about you and Dale,” he murmured, his voice low.

Edwina found that hard to believe. Justin despised Dale more than all of Dale’s other haters combined, and there was a long queue of those. Being a top agent earned a person a lot of friends. Being a bastard didn’t.

She quirked an eyebrow. “Really?”

He grinned as he dropped her curl. “No. He’s an asshole and you always deserved better.”

Then he dropped his mouth and kissed her. It was only brief but it was hard, and for a few seconds there was a thick reckless edge to it. His tongue swiped at her bottom lip and tangled with hers momentarily, before it was gone again and he pulled back, leaving her breathless.

So much for a kiss on the cheek.

Edwina’s hands curled into his t-shirt for support as the world shifted a little.

“I hear there are rumours you’re reconciling?” he said, continuing on as if he hadn’t just kissed her and caused a ripple of anticipation through the transfixed gathering and whipped every television news crew into a ratings orgasm.

The startling question was like a bucket of cold water to her muddled senses. “They’re not true,” Edwina denied.

It was his turn for an eyebrow quirk. “I saw a very cosy picture of you two.”

The hair on the back of Edwina’s neck prickled. That damn photo. Dale was such a dick. “Since when did you start believing what was in the media? I’ve seen several very cosy pictures of you and about a dozen different women. Am I to believe that you’re seeing all of them at once?”

Because that was certainly what the magazine articles had implied.

“Speaking of which,” he murmured, nodding his head towards the little band of onlookers. “Do you think we’ve given them enough to talk about? Shall we head inside?”

The neat little sidestep didn’t go unnoticed by Edwina, but she was grateful to grasp any return to normality. Standing here like this with Justin, nothing between them but four years of propriety, which didn’t matter a single damn jot anymore, was not good for her sanity. Her physical attraction to him couldn’t bear this kind of test and god knew it was going to be tested sorely enough in the next few days.

“Yes,” she said, pushing against his chest as she took a step back, grateful when he released her.

Grateful to be herded inside, away from prying eyes, even if the press of Justin’s hand into the small of her back made her want more than just a show for the cameras.

The Hero is currently available in digital format only: 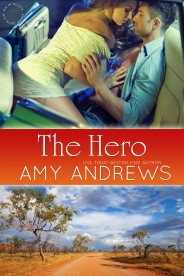 Did you know that The Hero and many titles are available digitally from Tule's own bookstore? Check it out!