The Cowboy Next Door

Love’s worth more than being right.

When single mother Leda Plett – who’s doing just fine on her own, thank you very much – goes next door to retrieve her wandering pooch, she doesn’t expect to find the neighbor’s handsome brother lounging about like he owns the place. She certainly doesn’t expect him to go after the deadbeat who abandoned her. She’s not looking for a know-it-all white knight with long, lean muscles and a sexy smile. He’s hot, but she’s already been burned.

Rodeo-star turned agent Eric Anders is used to managing people, especially irresponsible males, and he can’t stand it that some jerk has left Leda high and dry. Clearly, the boots-and-sundress wearing mouthy mama needs someone on her side. He could change her life, if only she would let him. And it has nothing to do with the fact that her sparkly exterior hides a spirit that is as sweet as it is strong – and irresistible.

In fact, Leda is more mature than her years. She feels the weight of her mistakes, and wants only to make sure her daughter doesn’t suffer for them. Eric’s hot gaze makes her weak in the knees but Leda’s track record with men is as bad as it is short. Can she trust the cowboy next door?

When Eric’s well-intentioned actions inadvertently reveal a shameful secret from Leda’s past, he realizes she never needed him at all. As he watches her rise above the humiliation, he knows he must find a way to make it up to her, or risk losing the one girl he now can’t live without.

The words came from a gully to the left of the trail, he thought. She was definitely crying. Crying and cursing at the same time. That was never good.

They wound their way along the rocky ground and suddenly, there she was, huddled against a mossy rock.

He was on his knees beside her before he knew what he was doing. “What’s wrong, honey? Are you hurt?”

She was shivering. He shucked off his jacket and set it on her shoulders, where it hung like a tablecloth.

“I don’t need you,” she said, her voice hitching.

Jackson pressed against her side, nudging her with his muzzle. She put her arm around him and he crept halfway onto her lap. Good. The dog would help warm her up.

Eric sat down on her other side. The rock was still warm from the sun but the ground beneath them was cool. He lifted his face to the sky and took a deep breath.

He could feel her body beside his, her slender thigh running alongside his own leg. She was vibrating.

He adjusted his position and casually slung his arm across her shoulders. He felt like the kid in a movie theater, pretending to stretch so he could get closer to his date. Only this time, he was doing it to keep her warm.

And maybe keep her from bolting.

“The sky. The air. Smells good. And look at those colors.”

“I came out here to be alone, you know.”

“I don’t know. I’m only here because of Jackson.”

She put her face down and kissed the dog’s head. “Sweetie boy. Come here, Blue-Girl. You’re a good girl, too.”

“Oh sure,” said Eric. “The dogs get kissed. I on the other hand, don’t get so much as a civil word. That hurts my feelings.”

She sniffed, but some of the tension left her body.

At that, Leda lifted her head. She turned to face him, which put her once more well within kissing range. Inches away, it seemed. Her eyes shone in the light of the setting sun, her lashes damp, her lips swollen.

“Coyotes, huh?” One eyebrow lifted, as did one corner of her mouth, but she didn’t move away.

“That might have been safer,” she murmured. Her eyes dropped to his mouth. “For you.”

The dogs squirmed then and knocked against Leda’s shoulder. Her face collided with his, in a cheek-bumping, tooth-clattering connection that was nothing like a kiss.

“I most certainly did not!” He ran his tongue over his bottom lip and tasted salt. “You bit mine.”

Heat ran through Eric like an electrical current, the touch of her mouth on his like lightning, leaving him smoking and shaken. If that’s what an accidental kiss felt like, what would a real, full-on kiss feel like?

Jackson lifted his head and with one swipe of his enormous tongue, French-kissed them both.

He reared away and the moment was broken.

A bloody lip will do that.

The Cowboy Next Door is available in the following formats: 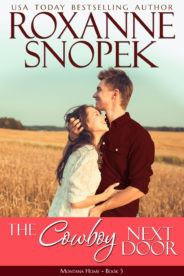 Did you know that The Cowboy Next Door and many titles are available digitally from Tule's own bookstore? Check it out!