Bride on the Run

Valerie Dimitri is on the run from her former fiancé who’d only wanted to marry her for her family’s questionable criminal ties. She also has the perfect cover with an assumed name and a thriving call-in advice show, “Sex Talk with Serena”, until one messy call blows up in her face. When she counselled “Anna J” to break up her with her boyfriend, she had no idea that she was telling a local celebrity to dump the hometown hero ballplayer, Boone Sullivan.

Boone has discovered Valerie’s real identity and he’s determined to expose her secrets… and maybe more. What he didn’t expect was to be blindsided by a crazy attraction to the buttoned-up lady with the sultry voice and a hidden past. He had carefully plotted his revenge, but soon all he can think about is how much he’d like to take Valerie as very own his stand-in bride…

“Could the bride’s dress be any gaudier?”

“All those ruffles on her anemic little body. Clearly she didn’t have a mama to help her, poor thing—”

The whispers wrapped around Valerie Dimitri as she walked down the aisle at Saint Theodosius Church on what should be the happiest day of her life. Her hand trembled as she clasped her father’s elbow. Her bouquet was so heavy she feared she needed two fists to hold it. Or that could be her unsteady grip, currently shaking petals loose.

The whispers continued from all these people here to gawk at the wedding and eat free prime rib at the reception in an exclusive West Palm Beach country club. “Her grandfather went to prison.”

“Do you think drug money paid for all these flowers?”

Her father – Anton – rested a hand over hers and squeezed. Her dad had worked so hard to cut ties from his criminal father and start a new life free of the drug-dealing mob family. Easier said than done after her mother died and money was so short, but he’d taught her that the Dimitris weren’t defined by their past, no matter their infamous last name.

“Her whole family’s been dirty for generations,” an old man informed the people in the pews near him, his voice carrying above the soft hum of the pipe organ music. “I can’t imagine she’s as innocent as she looks.”

“It’s the freckles with her strawberry blonde hair. Very deceptive.”

“Gingers. Never did trust them.”

Valerie rolled her eyes. Really? Now they were judging her by her hair color as well as her heritage? She’d spent her life being tainted by the family name. She should be used to it.

Should be. But wasn’t.

She stapled her focus back on her groom.

Erik stood at the altar in his tuxedo, lean and tall. Handsome. A dependable, stable owner of a chain of dry cleaners around the greater Miami area and beyond. He was a successful, upstanding local businessman. She wanted this. A normal family. A future that wasn’t connected to the dangerous Dimitri legacy.

If only someone had warned her that wedding jitters were so darn near debilitating.

Stage fright, perhaps, since this wedding was so huge, so elaborate, paid for by her fiancé whose mother insisted on the works for her only child. Her father’s pride had prickled at not being able to pick up the tab, but he’d relented for his daughter so Erik could have the ceremony close to his family’s expensive West Palm Beach home.

At the altar, nine bridesmaids waited in Vera Wang dresses. Nine groomsman in Hugo Boss. Flowers filled the church, the arrangements so massive and overpowering the place smelled like a funeral parlor. She focused on the stained glass window, the late day sun shimmering through.

Finally, after an eternity of running the gauntlet of gawkers and whisperers, she neared the altar. Erik turned to her, his arm extended.

It was time. She should hug her dad and let go.

Her gut knotted tight. She looked from her father to the man she’d chosen to spend her life with. As the organ music swelled, she couldn’t figure out what had her so rattled. Why she was so afraid to trust. And then her eyes settled on Erik’s hand reaching for her.

He wore a pinky ring, studded with diamonds.

A silly detail. No big deal. But her gut clenched harder at the memory of her crooked grandfather wearing just such a ring. Just a coincidence. Still…

Oh God, she didn’t think she could do this. She wasn’t even sure she loved Erik, but wondered if she was more infatuated with the idea of a normal life.

Except marrying someone for the wrong reasons was a recipe for disaster.

The packed church went silent as she stood still, trying to decide what to do, needing a sign. Then her father reached for her and wrapped her in a burly hug.

“Valerie,” her dad whispered. “It’s not too late. You can still run, baby. Run.”

Her breath caught in her throat. His words confirming her every fear. Something wasn’t right about this marriage and her dad knew it. Hadn’t her father tried to tell her there was something off about Erik and his fast rise in the Miami business world? That ring should have tipped her off sooner in their relationship, but she’d never had such a clear look at it as she had just now. Almost as if the sun through the stained glass windows had sent one last stream of bright light to clue her in that Erik was more than a simple dry cleaner.

But how did a person just bolt from the altar?

Just as she feared she would have to fake a faint, her father pressed something in the palm of her hand and she felt the familiar cold weight of his key chain. The one she’d played with often as a child. The keys to his vintage Harley.

He folded his fingers over hers and whispered, “My bike’s out back. Take it, Val. There’s a go-kit locked inside the saddle bag.”

A go-kit. Words from her childhood as they had to run when influences from her grandfather tried to nudge Dad back into their world. Or when their money ran out and they needed to dodge a landlord.

Or she needed to dump a groom.

Her heart beat faster as a restless murmur hummed over the wedding guests. If she was going to pull this off, she had to be brave, like her dad. “Thank you. I love you, Daddy.”

“Love you too, baby girl. Be happy. Be safe.” He flipped up her veil, removing the barrier between them and leaned in as if to kiss her cheek. “I’ll hold them off here. Now run.”

He was right. And she knew it with a sudden, startling clarity.

Letting go of her father, she turned Erik. “I’m so sorry. I can’t do this.”

Without giving him time to question or argue, she dropped her bouquet and felt like an even heavier weight had been lifted from her shoulders. She clutched bunches of ruffled tulle and took off at a dead sprint past her gaping bridesmaids. Their tangerine gowns were a blur of tea-length satin as she made way to the side door leading into the hall. She startled a guitarist waiting to play the Ave Maria.

She yanked open a door and—.

The high-pitched alarm system ringing in her ears, she scanned the back parking lot, over rows and rows of high-end cars, gleaming in the late day sun. Finally, the setting rays glinted off the sheen of her father’s Harley. He’d parked it beside a small cornfield.

She jogged across the lot, her heels click, click, clicking. She would have ditched them altogether but she couldn’t ride barefoot. Already a hubbub had started behind her, the sound of opening doors and a swell of voices. She wouldn’t have long to make her escape.

She unlocked the saddle bags for a quick look and sure enough. Her dad had left a go-kit with cash, a lot of it. Clothes, all different than her conservative style. An ID in the name of Serena Allen. Diploma in her new name with a Master’s degree in counseling that matched her own.

And CDs for creating accents?

Accents. Yeah. Her dad had thought of everything.

Everything she needed to run.

Bride on the Run is available in the following formats: 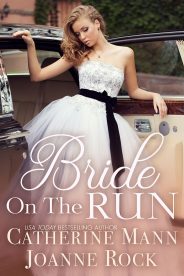 Did you know that Bride on the Run and many titles are available digitally from Tule's own bookstore? Check it out!