When young Lady Anne Macleod runs off with her true love, the handsome young falconer, Kirk Buchanan, she inadvertently sets off a chain of events that turns her young daughter, Cordaella, into a pawn between wealthy lords locked in a game of power, wealth, and greed.

At age nine, Cordaella is forcibly taken from her Highland home, and given to her uncle. Once there, Codaella learns the truth. She is the heiress to the Macleod fortune, to the dismay of many of her family members.

Thrust into an uncomfortable new life in England with her uncle, the Earl of Derby, she is unaware that she’s being groomed for a marriage to a Castilian duke who cares nothing for her and everything for her dowry…

Will Cordaella continue to act as a pawn in her family’s games or will she seize her own destiny?

That night, she woke with a lurch, her eyes flying open and her hand reaching out to the side of her straw pallet. Her fingers grasped the space between the pallets and she lay still, listening to the night and the wind blowing across the mountain behind the croft.

Culross, her wolf, was at her feet, and his head lifted in her direction. Slowly Cordaella lay back down, her heart still beating quickly, a pummeling that made her feel as if she had been running hard across the hill. “Papa—”

He grunted in his sleep.

“No. Go to sleep.” He rolled over, pulling the blanket higher around his shoulders.

She stared up at the thatched roof, damp with the terror of her sleep. She had dreamed of a man in a strange robe. He had come with two other men to take her away. He had tied her to the back of the horse. “Papa!” Cordaella turned on her side to stare at her father’s back. “I dreamed an awful dream. I dreamed that someone came to take me away. You were gone and Culross was dead.”

“It was a nightmare. Go to sleep.”

“Going into Lochaber has given you strange ideas, Cory. Maybe I shouldn’t take you with me anymore.” He listened for a moment and, when she did not reply, he was about to sink back to sleep.

“I dreamed that you let them take me. You walked away! I cried for you. But you were not listening. You did not hear me,” she whispered, a profound terror in her hushed tone. She shivered and inched closer to the falconer.

He pulled her pallet next to his and patted the straw. “Hush, child, you will make yourself ill dreaming such things.” She snuggled against him, her eyes just able to make out his profile in the dark.

He studied her tense face, not able to fathom her fear. “I told you that no one shall ever take you from me. I will not let your grandfather have you, nor the friar. As long as you wish to stay with me, I shall protect you.”

“But where should I go? Lochaber? Not a chance. You saw how they nearly chased me from the merchant’s stall.” He tried to smile but he hadn’t forgotten his shame from earlier in the day. “I’m afraid you’re stuck with me, lassie. We’ll be here forever, in these great mountains of ours.” Kirk placed one hand on the top of her head and he could feel the tangles beneath his rough palm. “I should have washed your hair before we went to town.”

“I like it this way,” she said, enjoying the feel of his hand against her head. He rarely touched her, never held her. It was nice to feel him now. “Perhaps you might have to go away like Mama.”

“I am much bigger than your Mama. Now sleep, child, and remember that tomorrow the sun will rise and I shall still be here, and your Culross will be here.”

She lay still, again listening to the night. Far away in the distance she could hear the hoot of an owl. It sounded lonely, she thought, as she plucked at the bedcover, a strange ache filling her chest. Culross sat up and whined, creeping nearer to Cordaella. He placed one paw on her ankle and whined again. Cordaella felt another wave of sadness but did not understand why. “Papa…”

He resigned himself to her questions. “Yes, Cory?” They were inevitable. When hadn’t she asked him things he couldn’t answer?

“Do you ever get afraid?”

He flashed back to the scene in Lochaber today, the merchant picking up a rock and brandishing it over his head. Kirk had been glad Cordaella was busy in the street with Culross, too entranced by the town activity to see the merchant’s threat. Awkwardly he patted her head, his fingers tangling in her hair.

“Everybody is afraid at some time,” he said slowly, quietly, feeling as if he had already failed her.

“Yes.” He took a breath and exhaled slowly, easing the tightness in his chest. “But there is nothing to be scared of here, especially as you have Culross near.”

“Yes, and he will never let anything happen to you.”

“Good.” She was sleepier now and her eyes felt heavy. “Good night, Papa.”

In minutes, she was asleep, but Kirk lay awake, her questions raising questions of his own. Should he send her from him? Should he return her to Aberdeen, the Macleod in blood even if not in name?

But for the love of God, she was seven. Just seven. How could he let her go yet? They were still so young together, he the father, she the daughter. He needed another winter, another summer, another lifetime to teach her about the great birds, the subtle but distinct personalities between the hawk and the gerfalcon, the tercel and the peregrine. He wanted to teach her the name of every plant, to help her see the differences among the wildflowers and the herbs and mushrooms which grew wild in the Glen Nevis woods. Cordaella. He wanted to touch her, to brush her soft cheek, but was afraid of the emotion bottled within him. He loved this girl more than life. Cordaella, he thought, watching her, dream.

The snow piled outside the cottage door, the night still, no wind to scatter the thick white powder that coated the roof and windowsill.

Kirk sat up late by the fire, his black hair shaggy, bangs falling in his eyes. He was determined to finish the doll by Christmas but there were only a few days left.

Culross stirred, sat up and got to his feet. He whined softly, his muzzle rising.

“What is it, boy?” the falconer asked, glad for a bit of company. The wolf whined again and Kirk reached over to stroke the animal’s coat. “What do you hear?”

The wolf growled low in his throat, his lips pulling away from his bared teeth. Outside a heavy hand banged on the door.

Kirk set aside the wooden doll, alarmed by the intrusion. There hadn’t been a visitor in nearly two years. He went to the door and unlatched it.

“McInnes!” Kirk exclaimed and swung the door wider. “What brings you here?”

“Bad news,” the page said, pushing through the doorway into the croft, his hands too stiff to peel his gloves off. “I can only stay a moment for I am to continue to London. I was afraid to send word by anyone else—”

“What news? What are you saying?”

McInnes paced the short stretch before the fire, oblivious to the wolf, the sleeping child, the late hour. “I can’t believe it. I don’t know what to think. It happened so fast and I don’t know how I managed to survive—”

“The clan Fergus has been quarreling for months with the Macleods. Then last September, Dunbar and his men marched on Moray, taking several Fergus nobles captive, seizing the odd castle. James Fergus, the clan leader, has been waiting for an opportunity to strike back.”

“Why was Angus Castle not better prepared?”

“The castle had been opened for the festivities, the traditional banquet for the servants and staff. It’s nearly Christmastide.” He swallowed hard, light-headed. “Yet today the castle is littered with dozens of clansmen, Macleod and Fergus.”

“His three sons? The young lords, Kenneth, Alasdair, Alick? Not them too?”

“There was no one left to protect him.”

For a moment there was just the crackle of the fire and the slow drip of melting snow from McInnes’ cloak.

Kirk struggled to put his thoughts in order. “The Duke. Did you see to it that the he had a proper burial?”

“I could not.” It was clearly an effort for Geoff to speak. “A Moray commoner strung the Duke from the drawbridge over the moat. I alone am left. There was no one else alive to help cut the duke down. None to defend the castle. That is why I go to London. The Duke and Bolingbroke were friends. Bolingbroke could send troops. He will help. He is the King.”

Geoffrey staggered to a chair, burying his face in his hands to suppress the tears. “Ah, but Kirk… there is nothing left at Angus.” His voice broke as if a child again, “Not a lord, not even a man.”

“Hush, the child is waking,” Kirk whispered, going to Cordaella’s pallet where Culross had positioned himself.

Reaching over the wolf, he touched her head. He was grateful that she hadn’t woken earlier.

Now he glanced over at Geoffrey. “Don’t say anything about this in front of her. She doesn’t need to know. It will only frighten her. She has had nightmares since visiting Lochaber. She is sure someone will come here.”

“Killed in his own castle. Not far from his bedchamber. Late last night—or was it this morning?—I can’t tell, I’ve ridden for hours to get here and can’t stay long.”

“I’m here,” he answered, even as Culross crept closer to her curled body, licking her hand and between her small fingers.

“Is someone here?” she murmured.

The Falconer’s Daughter – Book 1 is currently available in digital format only: 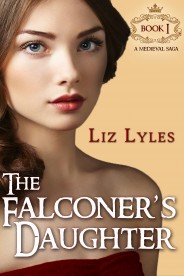