The Brothers of Whiskey River, Book 2 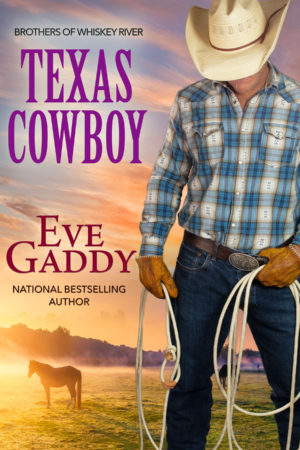 The Brothers of Whiskey River, Book 2

Meet the Kellys of Whiskey River, Texas, men who have always gone through life, and women, with their father’s legendary charm.

Trey Kelly has it all. Eldest son of Boots Kelly, Trey runs the Kelly ranch, and Trey’s heart is with his “babies”, Kelly’s Champs, the World Champion cutting horses he breeds and sells. Women love Trey and he loves women, but he’s never met the one he wanted for keeps. Until…

Reclusive Ariana Wright‘s lavender farm sits next door to the Kelly spread. Ariana is a smart, ambitious chemist and after the car accident that left her scarred, the success of her new line of lavender-based beauty products is all Ariana is interested in.

Convincing Ariana to take a chance on love is a task that takes all of Trey’s cowboy determination. But can Ariana let go of the wounds of the past and give herself more than one night with the cowboy?

“What in the hell are you doing here?” Of all the people she had not expected to see, Trey Kelly had topped the list.

“We need to talk,” Trey said, stepping inside and shutting the door. “I’d feel a whole lot better if you put that beaker down.”

“Afraid I’ll throw it at you?”

He eyed her a moment before he said, “Yes.”

She hefted the beaker, contemplating doing just that. “One’s my limit.”

“When I’m mad. I limit myself to breaking one thing.”

He looked at the broken glass littering the floor near the table. “Good to know.”

“You’re lucky I didn’t throw it. I played shortstop in high school and college and I can throw a runner out at home from center field.” She set the beaker down without telling him the crash he’d obviously heard was an accident.

Ariana crossed her arms over her chest. “Now get out. You’re about as welcome as a skunk at a garden party in here.”

“Ester’s decision was as much of a surprise to me as it was to you. I won’t deny I was hoping she’d choose me, but—”

“I don’t believe you. You should be ashamed of yourself, flirting with an eighty-year-old woman. I thought she was going to melt like a popsicle on a hot sidewalk.”

He had the nerve to laugh. She looked at the beaker and wondered how satisfying it would be to throw it at him. Or kick him in the nuts. But she was a grown woman so she contented herself with giving him her most scathing look. The one that said he was a worm she’d like to squash on the sidewalk.

“Come on, Ariana. I can’t help it that Ester likes men.”

“And horses,” she muttered. “Don’t forget the damn horses.”

There was that damn grin again. The one that brought out the dimples that should have made him look boyish but only made him look wickedly sexy and made his blue-sky eyes even more mesmerizing.

And he knew it. Quit drooling over him like he’s a hot fudge sundae. Fair or not, he’s getting the land you wanted. The land you needed. And you have zip.

She realized during her discussion with herself he’d moved closer, close enough to touch, if she was stupid enough to do it. He was looking at her seriously now, serious and sincere. What was he up to?

“I told you we’d work something out and I meant it, Ariana.”

“How?” she sneered. “I’m not marrying you.” Not that she thought he’d ask.

“I figured that out,” he said, his mouth quirking. “I had something different in mind.”

“What?” she asked suspiciously.

“I think I know a great place for your factory.”

“You do. And you’re buying it from Ester.”

“Not the farm. Another place. But I need to talk to someone before I show it to you.”

“Isn’t that convenient.” He was trying to snow her, to get on her good side. Why, she didn’t know.

“So suspicious,” he murmured. “I have more to tell you, but . . .” He lifted a hand and touched her cheek, the one that wasn’t scarred. “You know what I was thinking the whole time we were at Ester’s?”

He chuckled. “No.” His hand caressed her cheek, her ear, her throat. His voice was soothing and oh, so seductive. “I thought about kissing you. How much I enjoyed it. How much I wanted to kiss you again.”

She was still mad. Really. There was no way she would let him . . . His lips traveled the same path as his hand had moments before. Ariana arched her neck to give him better access. A tiny moan escaped her. He kissed the pulse throbbing at her neck and she moaned again, louder.

“I wouldn’t want you to,” he said and laid his lips on hers. His tongue probed gently, asking for entrance.

Oh . . . hell . . . Maybe I’ll be mad later. She opened her lips and met his tongue with hers. Heat exploded between them. Standing on tip-toe, she wrapped her arms around his neck and put some serious passion into it. He boosted her up, holding her so she was more even with him. Two steps and her back was resting against the refrigerator and her legs were wrapped around his hips.

His hips pushed against her in a slow, sensuous rhythm while his tongue, sweeping her mouth, touch, retreat, touch, made wild inroads on her self-control. She felt how hard he was even through their jeans and a thrill of excitement ran through her. But it wasn’t enough. She wanted to be skin to skin with him. It was rash, it was reckless, it was impossible to resist. She felt alive, more than she’d felt in months. Her fingers fumbled at his shirt buttons but only managed two, partly because they never let up kissing until he slid his hands under her sweater and pulled it off over her head.

She reached up to push back her hair and her fingers touched her cheek, felt the jagged, raised skin of her scar. Ariana froze, realizing she hadn’t thought about her scar until just now, when she had touched it. Their gazes caught and held. One of his hands was beneath her butt, holding her up. The other, his left, cupped her right cheek, then his fingers stroked very gently over the scar. “Does it still hurt?”

“Then stop worrying about it.”

He laid kisses, sweet, butterfly kisses, along her scar, from where it started high on her forehead, across her temple, and down her cheek until it faded away. Her heart stumbled. His lips kept going, kissing her neck, her collarbone. He raised his head and looked at her and in his gaze she read desire. Uncomplicated and unmistakable desire. “Ariana?” His voice was deep, husky.

“What?” she whispered, afraid to break the spell.

“Is there a bed in this place, or a couch?” He looked over at her worktable, littered with beakers, bottles, papers and clumps of lavender, and shook his head. “I’d say a table, but not that one.”

She laughed. “I have all three. Pick one.”

Texas Cowboy is available in the following formats: 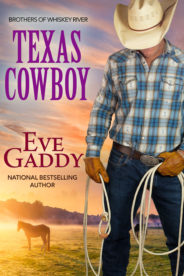 Did you know that Texas Cowboy and many titles are available digitally from Tule's own bookstore? Check it out!