Cammie Laroux is back in Alabama—again.

Dragged back to her small town to help her mother recover from surgery while rescuing the family event planning business should be a cinch. Even for a disgraced television chef, right? Wrong.

Among the many secrets Cammie’s family’s been hiding is the fact that their historic home is falling down. Oh, and the man hired to restore the house, Grey Harrison, is the same high school and college love of her life who thrashed her heart and dreams ten years ago. Yeah, that guy.

Grey, a widower with a young daughter, has never stopped loving Cammie, and when they are face to face once again, the chemistry is off the charts. Cammie may be in full-blown denial, but letting go is no longer in Grey’s vocabulary, even when winning Cammie’s forgiveness and renovating their love may seem like an impossible build even for a master architect and carpenter.

“Why, Cammie, can’t nobody say you forgot how to two-step, and that’s a fact,” her dance partner, Lloyd, a former high school classmate, remarked as they whirled around the scuffed wooden floor. He’d been one of several familiar faces she’d come across since they’d arrived.

She’d given up, and given in. “Thanks, Lloyd, I’d forgotten how much fun this is. I don’t think anyone could forget how to two-step. It’s so easy.” The name of the dance itself should clue one in to the simplicity.

“Aw, Cammie, it’s just ’cause you such a natural. Not everybody can do it like this, you know?”

She glanced around, realizing in about a second that, indeed, there were less than capable two-steppers all around. “I guess I’d never really thought about it.”

The song ended much too quickly. Not because she couldn’t bear to part company with Lloyd, though he was a handsome fellow and a good dancer, but because she was truly enjoying herself. Approaching the rather large table where her sisters and brother had taken on several others, she noticed a little ripple of shifting eyeballs. “What’s going on?”

Ignoring her, Emma said, “You sure were cuttin’ a rug out there with Lloyd, girl. Whoa, I haven’t seen you dance like that in years.” She smiled brightly.

Cammie crossed her arms and narrowed her eyes at them, then repeated, “What’s going on?”

“Might as well tell her. She’s bound to hear it in here or see for herself,” Maeve said.

Jo Jo stood, linked arms with her, and began leading her in the direction of the small bar over in a far corner. Just before they came too close, she pointed through the throng. Cammie followed her sister’s line of vision and she spotted Grey sitting alone at the bar.

He was sipping a longneck and appeared to be brooding. Nothing like the hottest guy in the bar sitting there like he was waiting for her. Well, hell. She couldn’t very well go back to having a good time with her people without at least saying hello, could she? It didn’t seem very nice, especially since he appeared fairly miserable hanging there by himself. Maybe she would wait a little while and then come back—

At that moment, his head snapped up and he caught her staring through the crowd. Her feet instantly became blocks of cement, and utterly unmovable. Crap.

He smiled then and raised his beer in salute to her, slapped a bill on the bar, nodded to the bartender. Within a half a second he was closing the distance between them without breaking eye contact with Cammie. She tried again to move, feet still frozen, rooted to the floor.

She straightened her shoulders, realizing a getaway wasn’t happening at this point. The intensity with which he bore down was intimidating, but maybe she’d asked for it with her surprised expression he’d caught her casting in his direction.

“Cammie,” he murmured into her ear, his breath warm, his firm but gentle grip seared her bare upper arm, calloused fingers directed her to a less visible spot away from her family and interested onlookers.

What the hell was her problem, anyway? She had a fiancée. And she and Grey had been in near contact for these past weeks without major incident. Why should this moment be any different? She allowed herself to be maneuvered to a more private area.

He was only slightly manhandling her, but she wasn’t sure she didn’t like it—just a little.

Grey stopped as they reached a small area where a few couples danced in a darker corner, seemingly unaware of anyone else. The bar was laid out like an octopus with four arms, with several small bars and dance floors stretching out like appendages from the main area. Cammie and Grey stood toe-to-toe as an old, slow George Strait song began. Before she realized what was happening, she was wrapped in his muscular arms, breasts pressed against his chest, swaying softly to their song.

She’d consumed a couple of longnecks, resulting in a lovely tingly sensation. Combined with the soulful country ballad playing, reminiscent from their dating years, perhaps it was no wonder she was experiencing more than a little emotional and physical sizzle of electricity. Considering she’d always been wildly attracted to Grey, she might want to rein herself in. She inhaled the scent of him, closed her eyes, and fell back in time.

Dear Lord. Why did he make her feel like this? What was it about him that caused the young girl who’d loved and trusted him with her whole heart to take over without a even a struggle from older, smarter her who’d thrown in the towel the moment they’d locked eyes?

At this particular moment, she couldn’t think, only feel and remember what it’d been like with Grey.

Again, Alabama is available in the following formats: 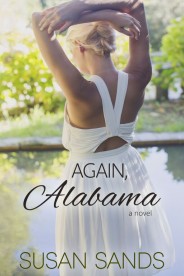 Did you know that Again, Alabama and many titles are available digitally from Tule's own bookstore? Check it out!