All doggy daycare owner Callie Andrews wants for Christmas is to win first prize this year. The annual window display competition is a huge event in Silver Falls, and she’s determined to showcase her success when her family visits her small town. It’s time for her parents and three older brothers to realize the “baby” of the family is thriving on her own.

The last thing Brandt Winslow wants to do is rehash the past, but returning home to Silver Falls means confronting the reason he left. His vacation, however, takes an unexpected turn when his well-meaning aunt meddles in his love life, and he finds himself caught up in her misguided efforts at matchmaking.

Despite their reluctance at being paired up, Callie and Brandt discover the holidays are full of surprises…and romance. But is the magic of Christmas strong enough to keep the couple together through the new year?

December might be six days away, but Silver Falls was ready for Christmas with fresh garland strung across First Avenue, streetlights decorated like candy canes, and twinkling lights, well, everywhere. The scents of pine and cedar hung on the air. The dusting of snow resembled pixie dust, another reminder of the magic of the season.

As Callie Andrews walked toward Wags and Tails, her doggy daycare, warmth flowed through her despite the freezing temperature on this overcast Monday morning. She loved how her small town celebrated the holidays. Loved the Christmas traditions of the First Avenue Business Association. Loved the nonstop cheer that overflowed from Thanksgiving to December twenty-fifth.

Who was she kidding?

She loved everything about this place.

Moving here and buying a business were the best decisions she’d made. This year would mark her third December in Silver Falls. She wanted to make the most of the holidays, especially with her family coming to visit. This Christmas would be perfect. Especially if her plans—updated last night on the flight home after spending Thanksgiving with her family in Los Angeles—worked out.

Up ahead, a blue compact SUV parked in front of Tea Leaves & Coffee Beans, the only coffee shop in town. Raine Hanover—owner and barista extraordinaire—slid from the driver’s seat, opened the hatchback, and removed a large wreath.

“It was great, though I need to lose ten pounds after eating too many slices of pumpkin pie smothered in whipped cream.” Raine shut the hatch. “Thank goodness for leggings. No way could I zip my jeans this morning.”

“I know the feeling.”

A man wearing black sweats, a gray hoodie, and tennis shoes crossed the street toward them. He couldn’t be out for a morning run. Not without a hat and gloves. Must not be from around here.

He stepped onto the curb, giving Callie a full view of his face. Her jaw nearly dropped. He was gorgeous.

Raine inhaled sharply. She must have noticed, too.

“Good morning.” His light brown hair was carelessly styled, almost as if he’d crawled out of bed and used his fingers as a comb.

Callie double-checked to make sure she wasn’t drooling. His stubble was sexy. Glasses gave him a nerdy vibe, but did nothing to dull his vibrant eyes. Drowning in those pools of blue would be so easy to do, but what a way to go.

He glanced at the door and then back at her. “Is the coffee shop open?”

As Raine stared—okay, leered—she hadn’t seemed to hear his question. Understandable. The barista’s boyfriend, Emmett, might not think so, but this wasn’t the typical eye candy found in Silver Falls.

Callie nudged her friend, trying to be inconspicuous. Luckily, the large wreath hid what she was doing.

“Uh, yes. Sorry.” Raine appeared dazed, but Callie didn’t blame her. This guy could be the next Bachelor of the Year, if the town awarded that title. “We’re open. Someone’s behind the counter. I’ll be right in.”

Raine’s words tumbled out one on top of the other as if she were nervous or flustered. Funny how an attractive guy could take intelligent, successful women right back to their tween days.

As he adjusted the right corner of his glasses, Callie couldn’t stop herself from gawking at him. He glanced at her, not seeming to notice her staring…or at least pretending he hadn’t. His grin—full of straight white teeth—sent her pulse sprinting.

“Have a wonderful day.”

His deep voice left her breathless. Or maybe that was his smile. Could have been his eyes.

Before she could think of anything to say, he went into the shop.

“Whoa.” Raine stared at the closed door. “Do you know him?”

“I’ve never seen him around. Trust me, I’d remember meeting someone with a face like that.”

Her mouth quirked. “He was eyeing you heavy. Want to call dibs?”

“Emmett would have an issue if I did that, but you—”

“I don’t have time for dating.” The words cascaded from her mouth like water over the falls this town was named after. “As we have talked about several times before.”

Raine feigned innocence like she hadn’t been trying to set up Callie with Emmett’s friends. “You made time for Rex.”

Callie shrugged. “A dog is different. I can take him to work with me.”

Not ready to have this conversation again, she motioned to the coffee shop’s door. “There’s nothing wrong with looking, so get in there and enjoy the view while you can.”

“You don’t have to tell me twice.” Raine grinned as if she were holding a winning lottery ticket. “I’ll bring by your usual order later. We can talk about our weekends, and if I find out more about the hottie stranger, I’ll let you know.”

“Please do.” A vanilla latte would give Callie a much-needed jolt of caffeine to get through the day after arriving home late last night. And even if she wasn’t interested in dating, the guy piqued her curiosity. She wouldn’t mind knowing who he was or what he was doing in town. “Thanks.”

“See you soon.” With that, Raine hurried into the coffee shop.

Strolling along First Avenue, Callie hummed “Winter Wonderland.” The impressive window displays overflowed with red, green, silver, gold, and white. Some themes were subtle, almost monochromatic. Others burst with a kaleidoscope of color. Lights—from miniature fairy ones to icicle and snowflake shaped—glowed brightly.

The elves, aka her fellow business owners, must have binged on iced sugar cookies to manage all this decorating over the Thanksgiving weekend. Only Raine hadn’t finished, but she was close. Wags and Tails must be the only shop not decked out for the holidays.

An empty feeling settled in the pit of Callie’s stomach. One that had nothing to do with skipping breakfast.

Callie had chosen to spend Thanksgiving with her family. She’d known taking off from Wednesday afternoon through Sunday night would put her behind. Being the last to finish didn’t matter. Not much, anyway. The First Avenue Business Association required stores to be decorated by the end of November. That gave her five days.

Judging for the holiday window display competition didn’t happen until December twenty-third. Some store owners worked on their entries until the last minute. Last year’s winner had added a Christmas-inspired wedding cake to her bakery window the day before judging. Pure genius and talent that deserved the grand prize—a gift certificate to the town’s best restaurant, a shiny plaque, and bragging rights for the entire year. Taryn Lawson had made no secret of wanting to repeat as winner.

Not if Callie had anything to say about it.

This year, she planned to step up her decorating efforts. She had the time now that she employed two full-time and two part-time employees. To be honest, she’d never cared or thought much about the award itself, but after listening to her parents’ and her three older brothers’ recent accomplishments over the weekend, she was determined to grab first place. Winning was her new goal.

Callie glanced across the street to see Mr. Jones setting out a display of snow shovels in front of his hardware store. The older man—some said Harry was in his late sixties while others claimed he was pushing eighty—wore a red-and-black padded parka and a hat with fleece flaps over the ears.

She waved a gloved hand. “I hope you had your fill of turkey, Mr. Jones.”

“More than enough.” He patted his stomach. “Did you enjoy visiting your family?”

Thinking about being with her parents and brothers brought a mix of emotions. She loved her family, and they loved her, but she wasn’t like them. Unfortunately, none of them recognized that or could see she had different goals. They misread her love of dogs as a sign of immaturity, treating her as if she were a little girl who needed help to get through the day instead of a twenty-eight-year-old business owner.

That would change when they arrived in Silver Falls on the twenty-fourth of December. Once they saw Wags and Tails thriving, they’d realize the baby of the family could take care of herself and run a business. And had been doing that for nearly three years despite their concerns.

Maybe then her brothers, who took overprotectiveness to the max, would relax. Flynn and Garrett had texted last night to make sure she’d arrived home safely, and Keaton had called earlier this morning in case she’d overslept. She appreciated they cared and watched out for her, but she didn’t like when they told her what to do or how to do it. The big bro stuff she could live with. The other made her feel bad and needed to stop.

“But I’m happy to be home,” she admitted. “I may have been born and raised in LA, but the big city no longer appeals to me. I’m a small-town girl at heart.”

Mr. Jones beamed, more like a pleased grandfather than a happy lumberjack. “We’re happy to have you here.”

In Silver Falls, we could mean anything from Mr. and Mrs. Jones to the First Avenue Business Association, but Callie stood taller. She’d never felt as if she truly belonged anywhere until discovering this town. “Thanks.”

He held onto one of the shovels. “We thought your employees would decorate while you were away since you’re open seven days a week, but Wags and Tails was closed for four days.”

Four and a half if she wanted to get technical. Callie didn’t. “I gave my staff the time off.”

“That was generous.” He arranged the last shovel before moving the sale sign closer to the display. “Hope you don’t regret that decision. The Association will issue a fine if your store isn’t decorated by the deadline.”

He didn’t sound upset. Add him to the list of people concerned about her. Unlike her family who made her feel as if she wasn’t good enough and needed validation, Mr. Jones was one of the many people who looked out for one another around town. Association fines added up fast. No one wanted to see another person penalized if they could avoid it.

Callie appreciated the sense of community, both as a business owner and resident. She adjusted the strap of her tote.

“I’ll be finished well before that.” If the setup didn’t hit any snags—it shouldn’t—the window would be ready tomorrow night. She crossed her fingers.

“Good to hear.” Relief softened his stance. “Holler if you need a hand.”

“Thanks, but everything will be okay,” she reassured him, knowing she had this, like most things, under control. “I have a plan.”

Her plans had never failed her. This one wouldn’t, either.

The Christmas Window is available in the following formats: 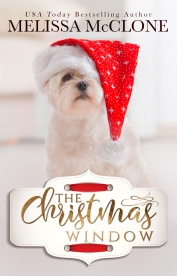 Did you know that The Christmas Window and many titles are available digitally from Tule's own bookstore? Check it out!