The Hills of Texas, Book 4

The Hills of Texas, Book 4

Claiming the Cowboy for Christmas

Her thermostat was set to frosty, until her Christmas cowboy cranks up the heat

Ashley Hughes would love to cancel Christmas this year. Instead of holiday plans, she’s back in her Texas hometown planning her twin sister’s wedding — to her ex! Nothing like small town speculation to make her life cheery and bright. No one believes that she’s over the groom, until a certain cowboy secret crush steps in to be her plus one. Ashley’s tried to friend zone Jennings since high school, because she’s always known kissing the casual charmer would lead to a love she’d never forget.

Jennings Hill would be the first to admit that his feelings for his ex-best friend are more likely to land him on the naughty list. When he sees Ashley again, he only wants to help but then a rumor links them romantically and that’s when their lives get complicated.

The more time they spend together, the more Jennings worries she’s not over her ex, but Ashley starts wishing Jennings was her present wrapped under the Christmas tree.

Grit your teeth and grin at all the fake concern about to head your way. Ashley Hughes made sure to plaster her brightest smile across her face as she followed her sister into Hurricane Harry’s.

The best local bar in La Colina, Texas, Harry’s was known for terrific live music and boasted over one hundred beers on tap. Once upon a time, it had been one of her favorite hangouts. Tonight, however, the location for her sister’s bachelorette party became a source of hours of personal torture. A tax audit for the mob would be more fun.

No. Wait. The Christmas Date Auction her mother had signed her up for tomorrow might qualify as worse, if that were possible. She had come home for the holidays and her sister’s wedding…to Ashley’s ex. Granted, she’d been the one to break things off and even give them her blessing. Shouldn’t that be enough? Her qualification for sainthood should be in the bag with this situation. Why add cruel and unusual to the mix?

I shouldn’t have put this off so long.

Two years since she’d been home. Or at least, since anyone other than family had seen her. At least she looked good. As the maid of honor, she’d planned the party and had sexy black tank tops made up with sparkly red text that read “Save a Horse, Ride a Cowboy” with “Taylor’s Last Ride” and the date underneath. Each lady paired her matching top with various sexy bottoms, mostly tight jeans. And all wore red heels to complete the ensemble.

Ashley had opted for a black velvet miniskirt, which barely covered her backside, but also had shorts built in underneath. Dancing at Harry’s meant two-stepping and a Texas version of the jitterbug, which required the shorts, or she’d be flashing her red lace undies all night. She wanted to prove to people she was fine, not get slobbered on by some drunk cowboy with plans for a romantic one-hour-stand in the back of his pickup.

An insidious little voice whispered that maybe she wasn’t fine. Ashley flicked the devil on her shoulder off. Taylor might be marrying Eric, but Ashley had been the one to see the connection between them. She’d been the one to give her permission. And, after her first year in Dallas, she could say for certain that she was over him. Even then, Taylor and Eric had needed more time, so Ashley had continued to remain in Dallas for another year. Two years alone. Two years away from her family.

She’d been certain about the breakup with Eric being the right move within the first few months. The problem was, no one else in their small Texas town believed that.

She’d taken the ostrich’s example and had been burying her head in the sandy hole of work up until tonight. Except, already she could feel the homesickness creeping in. But she’d made her choices. Mostly she just didn’t want to deal with the whispers and stares.

She pulled her shoulders back. Fine or not, she intended to give a damn good show for the folks at home.

She’d curled her long, dark hair, pinning the sides back from her face and applied dramatic makeup with a practiced hand. Her shoes were pure Dallas, three-inch stilettos and sparkly enough to satisfy any wicked witches out there. Too bad she couldn’t click her heels and make the public spectacle of this particular homecoming visit end.

Dutifully, she followed Taylor as they wound their way through the crowded room to a booth Ashley had reserved for their party. Even the bar was decorated for Christmas, if in a haphazard fashion. Strands of various mismatched Christmas lights had been draped all over the walls, and a Santa hat had been placed atop Bucky the mechanical bull’s head.

“What can I get you ladies?” A bartender approached the table and yelled over the din and the music. She recognized Bud, a guy who’d been several years ahead of her in school and inherited the bar from his dad a few years back.

Ashley caught his eye. “Tequila shots to start.” She handed him her credit card. “Keep the tab open.”

“That’s too much,” Taylor protested.

Ashley wrapped an arm around her sister and hugged her close, a pang of regret twanging through her when Taylor tensed at the contact. The past years had done a number on their relationship, and hopefully someday that would get better. Ashley was determined it would, but they needed time. After the wedding, after things settled to normal. Maybe then she could find a way home.

So, she pretended not to notice the tension. “Not for my twin. You only get to do this once. Don’t worry about the expense. Tonight is on me and the girls.” The other ladies nodded.

Plus, it turns out that when you have no life, you spend no money. Go figure.

Taylor loosened up, finally, giving Ashley a squeeze back. “Thank you.”

In short order, they downed their shots and men appeared and took each girl away for a dance. After pretending to enjoy a turn around the floor with one of them, Ashley checked their booth, which stood empty, their shot glasses littering the tabletop. Rather than sit there by herself as cowboy bait, she headed to the bar. “Hey, Bud. Can I have an IPA?”

“Ashley Hughes?” a female voice squealed from her right.

Here it comes. “Mandy Walker!” Ashley could do the bubbly girl thing when required. “It’s been ages. How are you?”

The blonde valedictorian of their senior class held up her left hand sporting an obnoxiously large diamond. “Married.”

“Let me guess? Jason Hubbard?” The two had been high school sweethearts, so figuring that one out didn’t exactly require a PhD.

Mandy laughed. “Who else?”

“You look fantastic. Marriage must agree with you.”

“You look great, too.” Mandy sobered and Ashley braced herself for what she suspected was coming. “Although I expected this to be your bachelorette party.” A concerned light dulled Mandy’s green eyes and her pouty pink lips turned down. “How are you handling Taylor marrying Eric?”

I’m fine with the marriage thing. It’s the rest of my life thing that’s still a mystery.

Ashley pretended not to notice the downshift in mood, holding on to her bubbly facade. “I’m thrilled for them. They make each other so happy.” Both were true statements. The problem was no one seemed inclined to believe her about the first bit, likely made worse by her conspicuous absence all this time. Her own fault. That and a nasty bout of bronchitis.

Mandy, sweet but not the brightest bulb in the box with social cues, didn’t take the hint. “But you must be disappointed. Everyone expected you and Eric to marry. When they announced their engagement last summer, it was such a shock.”

To everyone except Ashley.

“Things were over between me and Eric long before then.” A glance across the room revealed a glowing Taylor. She’d never seen her sister so incandescently happy.

Ashley idly wondered if a bullhorn might get the message through. But, while the mental image of blowing back Mandy’s over-teased hairdo with the sound filled Ashley with wicked satisfaction, she decided against it.

Where would she find a bullhorn in a bar anyway?

Besides, a long time ago, she’d come to the conclusion that the louder one defended themselves against small-town gossip, the more people talked. Luckily, Bud chose that moment to hand her an ice-cold glass of beer. She tipped it toward the other woman. “See you around, Mandy.”

Seeking a quick escape, she spun away only to smack into a wall of muscle, her beer sloshing all over her hand.

“Sorry.” Ashley stumbled back into the bar. Muttering, she shook off her hand, and checked her outfit hadn’t suffered any damage. Satisfied she’d survived, she directed her gaze up, way up, into amused instantly recognizable blue eyes bracketed by laugh lines. Familiar eyes. The Hill family were practically identified by their eyes.

“Oh, no. Not you.” She groaned. Apparently, Lady Luck had completely abandoned her tonight.

She could deal with the stares, the pretend sympathy, and the unavoidable small-town speculation from nearly everyone else, but not from Jennings Hill. He saw too much and pushed too hard, and she wasn’t ready for that.

If anything, his teasing grin grew, casting her a careless kind of challenge she’d always found irresistible, even when they were kids. “Nice to see you too, Hughes.”

“It’s Ashley.” Not that he’d ever listened before. He’d called her by her last name for ten years. She waved her free hand as if shooing away an annoying fly. “Why don’t you go away?”

“How about a dance?”

“Did someone drop you as a baby?” Okay. Low blow. His dad had done that and still felt awful about it.

To her consternation, he plucked the beer out of her hand to set it on the bar. “Watch this for her, Bud?”

“Hey!” Ashley protested the arrogant move only to be ignored.

The bartender gave him the head nod guys used. “You got it, Jennings.”

Ignoring her grumble of protest, Jennings grabbed her hand, his ranch-roughened skin warming hers, and led her to the dance floor. A slow two-step started and he pulled her into his arms. An uneasy awareness slid through her—an unwanted reaction she didn’t need right now.

Claiming the Cowboy for Christmas is available in the following formats: 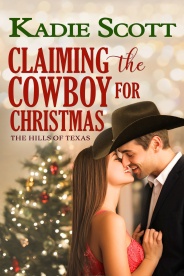 Did you know that Claiming the Cowboy for Christmas and many titles are available digitally from Tule's own bookstore? Check it out!