College professor Mallory Fredrick loves her job in a city that feels like home, but after a student attacks her on social media, she loses her peace of mind and confidence. When her college offers a sabbatical, she jumps at the chance to escape to her hometown in Texas.

Entrepreneur Alec O’Donnell specializes in helping people in crisis. He’s built his company and career on packing up lives as people start over. It’s just business until he meets Mallory. Something about the beautiful and fragile woman who still manages to hold on to her sense of humor affects him. As feelings develop, he realizes he’s not ready for her to move out of his life.

Can Mallory find peace, or will a second setback keep her from coming home for good?

Mallory Fredrick crossed her legs and swung her right foot into a rocking motion, trying to calm the nerves that had plagued her for a week. Iker, the human resources director, clicked absently through a set of electronic forms, the computer screen illuminating his face in odd patterns of a white-washed glow. “This is not a situation I’ve encountered before.”

“That makes two of us.” Mallory’s stomach felt as empty as her nearby classroom.

“We’ve got some options.” Iker’s directorial tone was mechanical, as if he delivered lines like this any time there was an emergency incident regarding a faculty member. Still, his lack of emotion coupled with little eye contact left Mallory unconvinced. She continued to swing her foot, settling into a rhythm to expend some of the frustration that had mounted between the time she discovered the threat, her meetings with the college’s police department, and now human resources.

Because this meeting with Iker involved her future and her paycheck, it was even more intimidating than her time with the Santa Fe College police chief.

Iker reviewed the faculty handbook, a document Mallory herself had referenced multiple times over the last week. Policies, protocol, and procedure were in place to protect both students and faculty, but even these rules didn’t quite cover Mallory’s situation. Because when it came to social media use by college students, that was a rather gray area to enforce in regard to conduct.

Iker read words Mallory had nearly committed to memory. This was nothing new.

And some of what Iker was saying didn’t even apply, an argument the chief had made. That was why Mallory’s student, Jesse Sands, had been slapped with a misdemeanor instead of a felony—even though a fine line had been walked.

Interpreting Mallory’s frustration, Iker admitted, “The college may need to look into updating a few of these policies.”

Mallory didn’t even try to camouflage the tartness in her reply. “Glad I could be the one to bring that to light.”

Every bit of continued reference to Jesse and his incident sickened Mallory further, exacerbating her stress because of the viral way the student’s words lurched beyond Mallory’s control. Successfully, Jesse had managed to threaten, humiliate, and shame Mallory while muddying the waters of college enforcement through public posting on social media.

For anyone with an Internet connection to see.

He posted a loose threat that he would “get her” followed by a series of expletives about the college. He added a violent meme that wasn’t of Mallory—but anyone who didn’t know better could have assumed it was.

This, according to the police, fell under the definition of threat on a public official because of her teaching position, though the student’s exact words didn’t cross into felony territory.

Mallory had sensed Jesse was upset before the posting. Her experience as an educator told her as much. He had been coming late to class and was on the brink of academic probation if his grades didn’t improve, but when he failed his last assignment, that was when the online posting hit.

So Jesse Sands had been pulled from class, slapped with a year’s suspension, and escorted off campus. But by the time he stepped off the curb of  Santa Fe College property, his words had already cut like a deep injury. Mallory’s confidence was shaken, her safety stirred in a way she had never experienced in five years of teaching full-time at a college and in a department she loved.

Mallory took a week off to personally regroup, and the police chief assured her she would be safe when she returned to campus for December-finals week. She had timidly resumed a routine of shuffling from the faculty parking lot to her office to the classroom, but she felt uneasy. Her eyes scanned her surroundings at all times, and she didn’t step anywhere she would be alone even though she felt that way. Colleagues offered sympathetic glances and basic apologetic comments for what had happened to her, but there was little meaningful conversation. Maybe people didn’t want to get involved. Students even eyed her with suspicion. She could only imagine what sensational gossip was swirling around the hallways. The unease was palpable, like a suffocating fog she couldn’t escape as she marched through an end-of-the-semester routine that should have otherwise been certain and celebratory.

“I’ll talk with the chief about his recommendations for bringing some updates to the attention of the college’s board.” Iker scribbled a reminder on a nearby sheet of paper, though Mallory had little confidence that updates would be timely. After all, any changes were too late to affect her.

The damage had already been done.

Iker spun a slim printed stack of papers in Mallory’s direction so she could read them. “You had asked about options for the spring semester given this semester’s . . . setbacks.”

The clinical word choice punched Mallory in the gut, a further blow of humiliation that proved even human resources was ill-equipped to handle nuances of emotional ramifications from a student they only knew by name and collegiate identification number.

She’d had fourteen weeks to get to know Jesse, seeing him every Monday, Wednesday, and Friday. She taught his first-year composition course and was a sideline cheerleader for his progress just as she was with all of her students. Jesse had a face, a personality—but, here, he was a statistic, not a person.

“Yes, my setbacks”—Mallory emphasized the word—“have been challenging this semester.”

Iker forced a curt smile before continuing. “And we want you to know the college continues to support you. We want you to feel safe.”

That feeling had escaped her for a week. The two little words of “get her” kept ringing in her ears, lassoing around her and constricting her movement through routine days. She had never been one to look over her shoulder in fear. But, now, doing so was the only way to know if he’d be following her with malicious intent. News stories of college attacks and violence had always seemed so foreign to Mallory.

Was this how it all started? And, if so, how would it stop?

Mallory could control her own actions, but she couldn’t control Jesse’s. That was what scared her the most.

“We’ve done what we are able to do within the limitations of our student conduct guidelines and New Mexico state law to make sure Jesse doesn’t bother you.”

But you haven’t done enough. Mallory wanted to bite back. That was the point. Jesse had been removed from view, but his virtual comments were indelibly stamped into her psyche. “Our hands are a bit tied because Mr. Sands—”

Coming Home is available in the following formats: 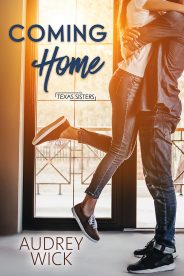 Did you know that Coming Home and many titles are available digitally from Tule's own bookstore? Check it out!