Melissa Sonnier is desperate to find her own happily ever after as she helps her sister celebrate her beach wedding in Driftwood Bay, but it’s difficult to move on and find love when she can’t let go of Judson Duvall, a boy she’s loved since middle school, even after their last break up in their on again, off again relationship. But as she watches her sister exchange her sacred vows, she sees Judson, waiting for her asking for one last chance. He vows he’s changed. Can she risk her heart one last time?

After his latest rodeo related injury Judson Duvall is ready to hang up his spurs and always a man of action, defies doctors and drives all night to reach the only woman he’s ever loved. He begs for one last chance and is prepared to do anything to win back Melissa’s love. He claims he’s changed, but is it enough or is it too late?

Melissa Sonnier heard the “Wedding March” and closed her eyes to the pain that crashed against her heart with the same beautiful ferocity as the waves slapping at the shore behind her.

She wanted to be married. She wanted to have a house and babies and a husband who came home every night and grabbed her around the waist and kissed her on the neck.

But today wasn’t about her. Today was all about her older sister, Maddie. Madeline Sonnier Parker would soon be Madeline Sonnier Hinson. After a rocky first marriage, Maddie was marrying the true love of her life, Sam Hinson, here at beautiful Driftwood Bay, Florida, on a lovely late-summer Saturday with what promised to be an extraordinary sunset to showcase the whole event.

Maddie and Sam met in February at their middle sister Michelle’s wedding to Brodie Stevens. Brodie had asked Sam to be his best man and Madeline, or Maddie as everyone called her, was the maid of honor. After some fireworks, they fell in love.

Happy for her sister, Melissa ignored the sadness that pushed at her. Maybe because she’d been engaged three times, two of those to the same man, and each time something had gone wrong and she’d called off the wedding.

No more. The surf crashed in sprays of glistening white foam that curled close to the flower-covered archway set up on the sand as the wedding altar. She could feel the moisture off the big bay’s cool waters. And she refused to add to that moisture by crying over canceled weddings.

So Melissa held on to the sweet-smelling Casablanca lilies in her bridesmaid bouquet and turned to watch as her sister walked barefoot through the white sand, their daddy proud and teary-eyed as he escorted her. Maddie’s little black and white mutt, Spike, pranced right along beside her, his black bow tie slightly askew.

Maddie looked ethereal in her white linen, flowing dress with the lacy bodice. She wore her hair caught back in an intricate art deco filigree-and-pearls comb but the wind lifted the long, burnished brown strands away from her neck. She carried a lush cluster of the same wonderful-smelling white lilies that also decorated the lattice archway where Sam and Maddie would take their vows.

Her other sister Michelle, now living here in Driftwood Bay in a new beach house, smiled at Melissa and then grinned at Maddie. Then Michelle gazed across the way at her husband, love shining brightly in her misty eyes. Brodie was the best man this time. He returned that same misty, smitten gaze to his wife. Their Uncle Jaybo, who owned the Sonnier cottage here on Driftwood Bay where the sisters had gathered to get Maddie ready, also stood across from Melissa and Michelle. He had happily agreed to serve as one of the groomsmen.

Judson should be standing there.

No, she and Judson should have been married by now.

But instead of finding their happily-ever-after earlier this year when Judson had come home to Spirit, Louisiana, where the Sonnier clan lived and where he’d grown up with Melissa, they’d had another horrible fight and now they were done. Forever.

A seasoned bull rider on one of the top regional circuits throughout Texas, Arkansas, Oklahoma and Louisiana, Judson had been thrown from a champion bull during what should have been a winning ride in Ft. Worth. The bull had stomped on Judson’s leg and broken it in two places. He’d come home to recuperate and, of course, Melissa had worried about him and tried to nurse him back to health.

But in spite of her concerns and the hope he’d finally give up the rodeo, he’d insisted he was going back to the rodeo. Until the doctor told him he might not be able to return to riding bulls at all. Judson had gone into a deep depression and had taken out all his frustrations, mostly on Melissa.

The one thing she’d been chasing, to be settled and happy like her older sisters, was still eluding Melissa. Even if she told herself that both of her sisters had been divorced and remarried, it still stung that she couldn’t follow in their footsteps the way she’d done with everything else in her life.

It was over. Finally. Marriage and babies weren’t in her future.

So Melissa lifted her spine, bit back her tears, and let the balmy, ocean breeze calm her frazzled nerves so she could enjoy watching Maddie marry Sam. She’d never seen her sister more beautiful. Maddie looked so radiant and happy Melissa couldn’t be sad or bitter. Not today. Not with the tropical wind lifting her hair and the golden-orange sunset washed in shades of salmon and soft pink making the perfect backdrop for the perfect beach wedding.

After the vows were exchanged and Maddie kissed her groom, everyone cheered and wiped at their tears.

“Reception at our house,” Brodie called out after picture time was over. Michelle clicked away, taking her official photographer role seriously. Grabbing Michelle and her camera against him, he added, “We’ve got a lot to celebrate.”

Melissa couldn’t help but be happy so she hugged both her sisters. “That was amazing,” she said. “So beautiful.”

“And you both look so pretty,” Maddie replied, her proud gaze sweeping over the pastel maxi-length sundresses they’d picked for her wedding. “Whew! I can’t believe how this wedding has gone off without a hitch.”

But even as her sister said the words, a hush fell over the small crowd gathered on the beach. Spike barked a snappy little warning. Melissa looked up, wondering why all eyes were suddenly on her. And then she followed Maddie’s gaze back toward the steps leading up to the house.

Judson Duvall stood up on the first tier of the deck, his hands tucked in the waistband of his jeans, his cowboy hat secure over his dark, thick, too-long hair, his feet braced apart, battered boots solid on the weathered wood.

And his eyes clearly centered on Melissa.

Judson took in the scene.

He’d dreamed about seeing Melissa walking up the aisle toward him one day. But they couldn’t seem to get past their old hurts enough to trust each other. To love each other.

Seeing her now, he wished he hadn’t jumped in his old pickup in the middle of the night to drive across four states to find her. Wished he hadn’t. Glad he did.

He aimed to win her back.

For forever this time.

And from the steam-driven frown on her pretty oval face, he’d need to do a whole lot of praying for that help. His bum leg hurt with all the force of a stampede but he gritted his teeth against the pain and tried to take a step down.

But before Judson could make it to the beach to congratulate the happy couple, he was immediately surrounded by Melissa’s daddy, Roscoe, Uncle Jaybo, Brodie Stevens, and the groom, Sam Hinson. They advanced like mad bulls, ready to knock him right off his high horse.

“Tough crowd,” he said to hide the tremor that moved through him.

He wasn’t scared. He’d do the same thing in their place. But he was mad. And mad usually got him a black eye or a crying-angry woman. Or both.

“I don’t think you were invited,” Uncle Jaybo said with just a hint of regret in his tone.

“Nope, I guess my invitation got lost in the mail,” Judson replied with a grin. “Happens.”

“Judson, we don’t need you making a scene,” Mr. Roscoe said on a fatherly plea. “I don’t want to have to escort you off the property, son.”

Judson took off his hat and hit it against his knee. “This is a big beach, sir. But relax, I’m not gonna ruin the happy occasion. I just need to speak to Melissa.”

Sam Hinson crossed his massive arms over his white button-up shirt. “What if she doesn’t want to speak to you?”

Brodie stood beside Sam, understanding and pity glistening in his eyes, his hands on his hips, an amused smile tipping his lips. “Look, kid, you’re not getting through.”

Judson grinned again. “Then I guess I’ll head to the bar.”

He tried to brush past Brodie. “But why don’t we ask the lady first.”

Brodie held Judson’s arm. “Turn around, Judson. ’Cause if you think we’re tough, you just try tangling with Melissa’s sisters and their mama. Especially on a day when they’ve all had mani-pedi stuff done and they don’t want to mess up their hair. It won’t be pretty.”

Judson shook his head and turned to leave, determination keeping his bad leg from buckling underneath him.

Judson twisted around to find Melissa standing in the sand, her sandals in one hand and her bouquet in the other. And her long golden blonde hair lifting out behind her in a way that made Judson blink and wonder if she was a mermaid.

Her greenish-blue gaze flounced over her defenders and then fell back on Judson with a wariness caught up in a web of seduction. “I’ll talk to him.”

“Honey, are you sure?” Mr. Roscoe called.

After a lot of mumbling and a couple of direct threats about breaking limbs and knocking heads, the wedding party, minus one, headed up to the two-story beach house that he figured belonged to Brodie and Michelle. Judson knew this because Melissa had gone on and on about having their wedding here not far from the old Sonnier cottage. But then she’d gone on and on about a lot of things until he’d made a mess of everything.

Life had been pretty good, until they’d broken up. Again.

The Southern Bride is currently available in digital format only: 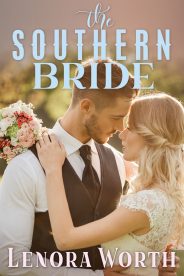 Did you know that The Southern Bride and many titles are available digitally from Tule's own bookstore? Check it out!