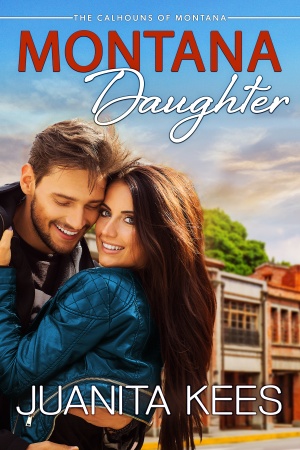 Trinity Calhoun is a name everyone knows on the race circuit, but her days in the hot seat are numbered. She’s tired of the limelight, meaningless relationships and long hours behind the wheel. When her father calls her and her sister home, she’s ready. She slips right back into the family business, finishing off the custom car projects her father has lined up. But racing is in her blood and she’s lured back to risking her life on the hot rod drag strips outside of town. It’s there she meets paramedic and volunteer firefighter, Reece Balmain, who has her re-thinking the road her life is taking.

Reece Balmain arrives in Big Fork a broken man. He’s lived and breathed through horror accidents, haunted by the faces of the people he’s cut from vehicles. He knows one thing–speed kills. He’s hoping not to see too much of it in small town Montana, until he hears about the drag races taking place outside of town. He knows Trinity Calhoun. He’s watched her race, seen her win, held his breath when her car somersaulted into barriers in Daytona Beach. He doesn’t like what she does, but he can’t stay away from the woman who’s claiming his heart.

Trinity rolled her shoulders, eased the stiffness in her neck, and stretched her spine against the restraint of the body harness. Gloved hands tight on the wheel, legs braced, she lined up in fifth position behind the pace car and brushed aside the nagging feeling in the pit of her stomach. Pre-race nerves mixed with adrenaline. Standard.

Her earpiece crackled, and Paige’s voice sounded in her ear. “You’ve got this, Calhoun. Last race. And you’ve got more power under that hood than you need with your skills. Think Montana, baby. You’re going home with a trophy in your hands.”

Paige Drew—her pit mechanic, rock in a storm, and best friend since kindergarten. If things hadn’t gone south between Paige and Mason, they might have been sisters-in-law. “Roger that. I wish you were coming home with me. Like old times.”

“You know why I can’t do that.” Life in Bigfork would never be the same for any of them. Not since the events that had changed their paths in life. “I’ll see you back here when country living gets too quiet for you and the track starts calling your name. You go home. Spend some time with your family.”

Trinity grinned. She couldn’t wait to see her brothers and her dad again. Except for Mason. He was a pain in the ass, but she loved him anyway. Maybe one day he’d forgive himself for the accident that killed their youngest brother, and let the people who loved him back in.

A trickle of sadness had her attention moving to the photograph glued to her dashboard. She tapped his face, so young and innocent, so much like their dad in looks. “This one’s for you, Mitch.” She blew him a kiss skyward off the fingertips of her glove. Maybe Heaven had its own spectator stand today, and Mitch would be watching.

“Three warm-up laps. Ease into the weave off the mark, and you’ll be hot to trot on those tires,” Paige reminded her.

“Horses, horsepower. Same thing, just different. Ten seconds to the flag. Handing you over to the boss. Drive safely, Calhoun.”

Flag up. She listened to the instructions from her team manager, queued in her spotter, as the field rolled in behind the pace car. She set the weave pattern that would warm up her tires and focused on the track.

The time for thinking was done. From here on in, it was teamwork as she relied on someone else’s eyes, ears, and guidance. Her part was to apply handling skills and drive. To ignore that flutter of fear, of premonition, in her belly that always closed her throat before the flag went up.

Three laps and a green flag. Adrenaline hit like a fireball in her chest, chasing away the niggle of panic, the flames licking through her blood, tensing the muscles between her shoulder blades, and in her arms and legs. She’d relax in that well-earned bubble bath later with a glass of champagne in her hand.

Instructions buzzed in her ear, her mind processed them, and her body followed orders with an unconscious competence borne from back-breaking hours of practice. Fences, barriers, cheering spectators—the scene blurred in her peripheral vision until it disappeared completely and all she could see was track and cars and a finish line, and the end of her last race at Daytona Beach. For now. Forever. She couldn’t decide.

She caught a side drift up the slope, and the spotter yelled at her about being too close to the barrier. She concentrated on getting back down to sneak in a pass into third. Cheers from the team filled her head. She shook them off and nosed into second. Out in front, Issy de la Cruz, queen of Daytona Beach, held first place with ease. The one to beat.

“Car twenty-three coming in from the rear. What is he doing? He’s bumping cars off the track…” Disbelief rippled through her earpiece. “Looks like Meira’s lost his head. He’s not taking instructions. Trinity, look out, this guy’s coming right up on your tail.”

She had no time to envision the carnage as the spotter guided her on evasive action. Not fast enough.

The impact sent shudders through the roll cage. Lights, turf, barriers, fencing joined together in a vortex, spinning out of control. She let the wheel slip through her fingers, steering into the spin, desperately trying to minimize the damage as the force pinned her back in her seat.

The barrier came at her fast. Gray, solid, bone-jarringly hard. The photograph of Mitch slipped from the dashboard. She reached out for it, for him, but the safety harness and HANS device held her back until impact rattled her bones.

Pain. Hot, sharp, like the blade of a knife against her skin. Colors—blue, red, white, orange—flickered beyond eyelids too heavy to lift. Trinity. Her name whispered through her mind in a voice so much like Mitch’s. Was he here? No, he couldn’t be.

Trinity, can you hear me?

I can hear you. She answered him through cheeks filled with cotton candy even as his face faded from her mind. Don’t leave me, Mitch.

A drumbeat made her eyes water and her teeth hurt. Stark white light pierced her pupils as gentle fingers lifted her eyelids. She hissed out a breath at the pain that stabbed at her head.

“Trinity, can you hear me?” A male voice. Not Mitch. “Can you tell me where it hurts?”

A chuckle. Deep with a cynical ring to the tone. “That’s what happens when you slam into barriers at two hundred miles an hour. Lucky for you, the safety gear did what it’s designed to do. Open your eyes for me.”

She cracked one open, the other refused to follow. He’d opened her visor. “Are you an angel?”

That chuckle again. More humor in it this time. “Honey, I’ve been called a lot of things in life. An angel isn’t one of them.”

She forced both eyes open. Dark brown hair, a strong nose and chin, beautiful sea-blue eyes, and a serious scowl as he fired off questions and she answered them.

Yes. No. She reached up a glove to touch his face, traced the line of the neatly trimmed beard along his jaw. “You look like an angel.”

The scowl of concentration disappeared. “I’m going to assess your injuries, do you understand?”

“I’m going to unclip your harness. Tell me where you feel the pain.” The pressure of the harness released, and his hands replaced it as he searched for injuries.

“My shoulders hurt from the pressure of the harness. And besides a headache, I’m fine. I will not be carried off the field on a stretcher.” Her glove slipped to rest against his chest.

“You’re not walking away in a hurry, either. Not until I’m satisfied you’re okay.” His eyes searched hers. “Any difficulty breathing? Can you swallow? Any nausea?”

He reached down for a bottle of water and held it to her lips. “Slowly and not too much, okay? Good girl. What about your neck? Any pain when you move?” He screwed the lid back on the bottle, dropped it, loosened the tab on the collar of her racing suit and probed the muscles with the tips of his fingers warm on her skin.

“Fine. Help me out, and I’ll walk to the first aid station. I’ll let you prop me up if you like.”

“Ms. Calhoun, I found you unable to drop your window web to indicate you were okay. In case you hadn’t noticed, you’ve been in a crash, and there’s still a good chance you may have sustained a concussion.”

“There’s a massively reduced chance of concussion. That’s why I have a HANS device. To avoid having my head shaken like a cocktail in a mixer. I’m fine.”

“If I don’t follow procedure and something goes wrong, you or your team could sue my ass off.”

“I passed out from the force of G-acceleration, and your ass is safe from me, but when I get hold of the asshole who caused the crash, he’ll need the stretcher.” She moved to take off her helmet, her fingers stilling as his hand covered hers.

“Don’t take that off until I tell you to.”

“Angel, this is my last race. I’m walking off this track with or without you.”

The paramedic pulled his hand away. “Are you always this stubborn?”

Trinity grinned. “I’ve been in worse crashes. I know I’m fine. My car is one of the safest on the track. My father wouldn’t let me race any other way. The only body parts that hurt like hell are my head and the pressure points where the harness did its job. I suspect there’ll be some colorful bruising in those places later, so be kind to me with the painkillers when I’m out of here, okay?”

“A few more checks and I’m done. Then I’ll help you out.” The determined set to his mouth and stern look in his eyes allowed no argument.

“And you’re calling me stubborn.” Trinity damped down on the urgency to tear off the helmet and scramble out the window. “What’s your name, Angel?”

“Reece. That’s a nice name. Finish your checks, then let me out of here, because I won’t go down in history as leaving my last race on a stretcher. My brothers would never let me live it down.”

Montana Daughter is currently available in digital format only: 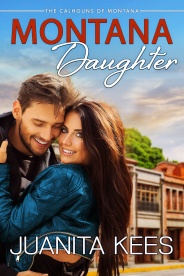 Did you know that Montana Daughter and many titles are available digitally from Tule's own bookstore? Check it out!