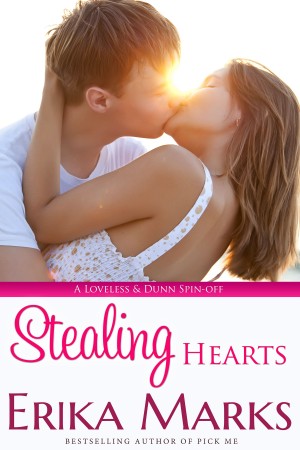 Bartender Mick Atwell has one more commitment before he leaves Magnolia Bay for Colorado: help his best friend, Tim, get his new wine bar POUR ready in time for its Valentine’s Day grand opening. But when Tim’s little sister Lucy breezes into town unexpectedly from New York for a visit, Mick doesn’t see how they’ll keep to their tight schedule—any more than he sees how this beautiful, spirited woman could possibly be the same irresponsible “kid” Tim has been complaining about for years…

Despite her carefree smile, Lucy Waverly hasn’t come back to Magnolia Bay for a vacation—she’s come home to hide. After discovering her boss at the gallery is selling forgeries, she needs to lay low and figure out a plan to get herself out of this dangerous mess—a plan which can’t include falling for her brother’s sexy best friend, no matter how safe he makes her feel, or how his smoldering eyes turn her inside out.

Mick has one foot out the door, but when Lucy’s troubles follow her to Magnolia Bay, they are thrust together to keep one step ahead of danger and get POUR open in time.  Soon the man who lives by his plans is wondering if the woman who lives by chance may not be worth breaking his rules for.

“When you walked into the bar and flashed that smile at me, I thought, Damn, that’s a woman who could really mess things up for a smart guy like me.”

“Too bad I’m just someone’s little sister,” she said, “or you might actually let me try.”

She knew she was playing with fire now, so close she could practically feel the heat of the dangerous flames she’d lit coming off his body. But tonight, she didn’t care if she got burned.

“No, I mean, really see me.”  She tossed her hair over her shoulders, giving him an unobstructed view of her. “Do I look like someone’s little sister right now?”

His eyes raked over her, flashing with the unmistakable heat of desire. She knew he couldn’t say no. Her breasts felt heavy suddenly, their tips puckering under the thin fabric. His gaze took them in too, which only made them ache for his touch more.

He took the glass from her hand and set it down. All the butterflies she had tried to quiet in her stomach before returned. She rolled her lips together.

He watched her expectantly. “We’ve been down this road before, Lucy.”

“Maybe you think you do.”

“Why? Because I’m too young to know better?”

“No,” he said, his voice deepening, “Because maybe next time, I might not be so honorable.”

In the next minute, his mouth covered hers, hard and insistent and entirely possessing. He’d been right to warn her. There was no hesitation or doubt in his kiss, no uncertainty when his tongue pried her lips apart and explored, wrapping her tongue around his as he guided her down to the mattress, submerging her in the frothy comforter.

She reached out for the light but he stopped her.

Lucy had never known a few simple words could light every inch of her body on fire but that was just what he did with his command. When his fingers began freeing the trail of buttons beneath her throat, and with every one that gave and every new inch of skin he exposed to the air, she felt as if she would explode. She wanted him to just tear them apart, to consume her, but when she tried to hurry him, pleading for him to end her torture, he took her hands and pinned them over her head.

“I don’t like to be rushed,” he said. “You should get comfortable. This might take a while.”

Stealing Hearts is currently available in digital format only: 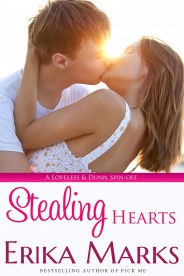 Did you know that Stealing Hearts and many titles are available digitally from Tule's own bookstore? Check it out!