Speech therapist Trinity Redfern knows her perfect match is out there somewhere. And when she finds him, he’ll be articulate, well-dressed, and most of all, he will let her call the shots.

Reclusive rancher Zane Nash has heeded life’s lessons. Never trust anyone, especially a woman. But when he becomes an instant father to five-year-old Finn, he must trust the sassy speech therapist who takes over his ranch for the summer. Trinity is Finn’s last hope to learn to speak again.

But when the summer ends, has time run out not only for Finn but also for Zane? Can the reserved cowboy find the words to make strong-willed Trinity stay… forever?

“Come on Trin, give me something to go on.”

Trinity Redfern smiled. She might be talking via her cell, and not face-to-face with Ivy, but she could sense her oldest friend’s deep curiosity. The mysterious twelve long-stemmed red roses delivered to Trinity last week had become a regular item on their conversation list.

“I’ve got nothing –” She stopped as the door to her right opened and a small dark-haired boy joined her on the porch of the summer camp building. “Hang on, Ivy. Finn’s here. Hank’s running late to collect him.”

Trinity hunched her shoulder to hold her cell closer to her ear while she helped Finn climb onto the bench seat. The five-year-old snuggled against her and she wrapped an arm around his thin body. They’d spent the past two days together at the Marietta Mad Scientist School but it was only when they were alone that she took off her teacher-hat and put on her friend one.

She again used her hand to hold her cell. “Sorry, Ivy. As I was saying I’ve got nothing. Really. The card wasn’t signed. It never is.”

“Never is?” Trinity held the phone further from her as Ivy squealed. “Trinity, have you been holding out on me? It wasn’t only last week that you received red roses from a secret admirer?”

Trinity stifled a sigh. She’d walked straight into that one. She wasn’t used to watching what she said to her oldest friend. They didn’t usually keep secrets from each other. But the name of the person who’d sent her the roses had been off-limits, even to Ivy. Trinity hadn’t wanted her city-past to taint the new life she’d worked so hard to make in Montana.

“You know I’m not giving up until I find out a name. I’ll need it for the wedding guest list.”

Trinity groaned. “You and your lists will be the death of me. As I’ve said before, as your chief bridesmaid I’ll be busy enough without having a partner to entertain.” Before Ivy could reply, Trinity added, “I’ll put Finn on. I know he’d love to tell you what he caught in the pond today.”

She lowered the phone and passed it to Finn. Last summer he’d lost his parents in a light plane crash and both Trinity and Ivy made a point of looking out for him. Finn pressed the cell against his ear and smiled.

Finn chewed his bottom lip and then spoke, his voice low and quiet. “Hi, Ivy.”

Trinity held her thumb up in a ‘good job’ sign. Finn rarely spoke.

“Hi, Finn.” Even without having the phone close to her, Trinity could hear Ivy’s cheerful words. “Have you had fun with Trinity at science camp?”

He quickly passed Trinity the phone. She dropped a kiss on his silken dark head. He smelled of sunshine and oranges.

“Ivy, Finn sure did catch a big water bug. It was a water strider.”

“That’s great. I know how he loves his bugs. And that’s the most words I’ve heard him say. You’re good for him.”

She didn’t voice her thought that seeing as she was a speech therapist when she wasn’t knee-deep in pond water, she should be able to help him. Finn was already self-conscious enough about people commenting on his lack of speech.

She’d watched him closely over the past days and she was certain he didn’t have an expressive or receptive language delay or any auditory processing concerns. He understood everything anyone said to him and when he did speak his words were quiet but clear. She suspected that the loss of his parents, and the combination of grief and anxiety, meant he spoke as little as possible. She was confident he’d find his words again. The only problem was he was due to start school in the fall.

Finn yawned. The fresh air mightn’t have put any color in his pale face but it had tired him out. She tightened her arm around him as he rested his head on her shoulder.

“You’d also be good for his uncle. He’s not a great talker either.”

Trinity’s attention zeroed in on Ivy.

“His uncle, Zane Nash. He’d be good for you too. I saw the way you stared at each other at Rhett’s Christmas bonfire.”

“Did we?” Trinity kept her question casual. “It was so long ago I can’t remember. You’d have to remind me what he looked like.”

The truth was she didn’t need any help to remember Zane Nash. Or the awareness that had curled through her as their eyes had locked across the fire pit. In that brief moment it was as though all the dreams that had caused her to defy her family and head west to Montana had a chance to come true. But then the grey-eyed and wide-shouldered cowboy had never looked at her again. She also suspected he’d gone out of his way to avoid her for the rest of the night.

“Trinity, I know you remember Zane. I also know you know who sent those roses. Maybe Mr. Red Rose Man isn’t your Mr. Right, but he does exist and is out there somewhere.”

Trinity laughed to mask her fears. She was an eternal optimist but with Ivy having found her ‘happily ever after’ with rancher Rhett, Trinity’s certainty that she too would find such happiness decreased with every lonely summer vacation.

“Let’s hope Mr. Right does exist. But I’m starting to think he rides a unicorn and is a mythical creature himself.”

Ivy joined in with her laughter. “What happened to Mr. Right being articulate, well dressed and letting you be the boss?”

“Oh, he’s still all of those things but whatever far-off kingdom he’s hiding in with his unicorn, it isn’t Marietta.”

“Are you sure? He could be hiding in plain sigh.”

Trinity shook her head not so much in reply to Ivy’s teasing but to clear her mind of an intense grey gaze. “I’ve lived in Paradise Valley long enough to know he’s not here.”

A familiar white pickup drove into the summer campgrounds, a trail of bone-dry dust in its wake. Hank, Hollyhock Creek’s ranch foreman, had arrived to collect Finn. He must have sorted his sick calf.

“Finn’s ride is here.” Trinity glanced at the child next to her. His small red-shirted chest rose and fell in the timeless rhythm of sleep. “So I’ll say good-bye.”

“Okay. See you soon. We’re looking forward to you staying next week. Rhett especially. He says if he has to give his opinion on another color sample he’s spending the rest of the summer in the line cabin away from his sisters. He has no idea what the difference is between Persian and Royal blue.”

Trinity laughed softly. “Poor Rhett. If he had to decide between cows I’m sure he’d have no trouble. Tell him I’ll help choose the color for the bridesmaid dresses. See you Monday.”

Trinity ended the call. Her arm lowered but instead of returning her cell to her pocket, she stared out at the pathway, her phone forgotten in her hand.

The tall and lithe cowboy who strode toward her didn’t resemble the bowlegged and wizened ranch foreman who’d previously collected Finn. And unlike Hank, no white smile flashed across his face as he drew near. Instead the tanned planes of the man’s handsome face remained settled in remote lines.

Heart hammering, she made no move to wake the warm child sleeping against her or to stand.

The cowboy halted on the bottom porch step. Beneath his battered Stetson too-long dark hair curled over the collar of a shirt that was once blue but was now a sun-bleached grey. The left knee of his fitted jeans was ripped and thick dust coated his right side as though he’d lain on the ground or barn floor.

Her chin tilted. She hadn’t forgotten a thing from the night of the bonfire. There was no doubt the scruffy and unsmiling man before her was no regular Hollyhock Creek ranch hand. He was Zane Nash. Finn’s uncle.

Her Big Sky Cowboy is currently available in digital format only: 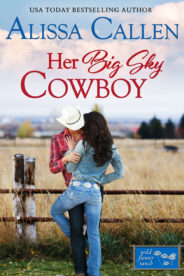 Did you know that Her Big Sky Cowboy and many titles are available digitally from Tule's own bookstore? Check it out!