The Rebel and the Cowboy

He’s got a lean, hard body and the heart of a poet…

Casey Carmody may be the dreamer in his family, but he’s a born-and-bred cowboy. His days are spent on the family ranch while his nights belong to his band and the music they create. Casey would never dream of walking away from his responsibilities to pursue a career in music – until he meets urban artist Eva King.

Eva has always been a rebel. In town to try to kickstart her career, the last thing she expects is to feel an instant connection with a cowboy. They both fall hard, but it doesn’t take long for the rebel in her to clash with Casey’s determination to do the right thing – even if that means sacrificing his dreams.

With so much at stake, can these two soulmates risk building a life together?

Eva King watched with growing unease as the young receptionist at the Marietta Motel had a hushed, furtive conversation with an older woman Eva guessed was the manager. Both women turned to look at Eva briefly before resuming their consultation.

Eva ran a hand through her short blond hair. She’d been driving since early this morning and all she wanted was a shower and something to eat that didn’t come from a fast food window. But instead of handing over the key to her room when she arrived five minutes ago, the receptionist had tapped at her computer briefly, rifled through printouts on her desk, then called her boss out from her office.

Finally the older woman patted the receptionist on the shoulder before stepping up to the desk, a mask of polite concern on her face.

Eva braced herself. Experience had taught her people were always at their most polite when they were about to disappoint.

“I’m so sorry to have to tell you this, Ms. King, but we have no record of your reservation. And unfortunately, we have no vacancies at the moment. June is always a busy time of year for us.”

“That’s not possible. I have my reservation right here,” Eva said, showing her the confirmation she’d printed out three weeks earlier when she made her online booking.

“Unfortunately, there’s just nothing in our system. It’s incredibly strange—this has never happened to us before and I’ll be getting our computer guy to look at it first thing.”

“Okay, but where does that leave me?” Eva asked.

“I can give you the number for the Graff Hotel in town, if you like? There’s also Bramble House B and B, but I know for a fact they’re booked out this week because we got the overflow.” The manager’s smile was full of professional sympathy.

“Thanks, but I’ve already got their number,” Eva said.

“As I said, I’m terribly sorry. I’ve got your details, though, so if something comes up unexpectedly, I’ll call you.”

Lips pressed together to hold back some choice four-letter words, Eva exited to the parking lot. Standing in the afternoon sun, she tried to fight the panicky feeling tightening her chest. Her big meeting was tomorrow. The rest of today was supposed to be about doing reconnaissance, getting a sense of the town, and scouting the location of the old grain elevator that would be her canvas if things went well. She didn’t have time to waste finding somewhere to sleep for the night.

Don’t freak out. Take a deep breath and THINK.

One thing was certain, she couldn’t stay at the fancy hotel the motel manager had recommended. She’d considered it when she first looked at options for accommodations in Marietta, but the moment she saw the high-scoring reviews for the Graff, she’d known Dane and his crew would want to stay there. Despite his reputation as an edgy street artist, Dane was five stars all the way when he traveled.

Eva would rather sleep in her van than stay under the same roof as her ex-employer, who also happened to be her ex-boyfriend. Hell, she’d rather sleep in the woods, with wolves and creepy-crawlies to keep her company.

But hopefully it wouldn’t come to that, because any second now, she would come up with a brilliant plan to find somewhere to sleep for the night. This was what she did best, after all—troubleshoot. For five years she’d put out fires and solved problems for her ex. Now it was time to use her skills to help herself.

The panicky band around her chest got tighter as her brain remained stubbornly blank. There was so much riding on the next few days. Everything, really.

Concentrate. Get your shit together. There must be someplace else to stay around here, even if it’s not an official motel or hotel.

Hope in her heart, Eva pulled up the Airbnb app on her phone. Sixty seconds later, she shoved it back into the pocket of her skinny jeans. Apparently the sharing economy hadn’t reached small-town Montana just yet. Damn it.

Okay, fine. She was going to have to get creative. Crossing the lot to her beaten-up black van, Big Bertha, Eva climbed in and started the engine. The motel was on the outskirts of town and it was only a short drive before she was cruising down the aptly named Main Street, scanning the well-kept, quaint western storefronts, determined to find a place locals frequented. A general store or café, someplace where the staff would have their finger on the pulse of the town.

She found what she was looking for almost immediately—the Main Street Diner looked as though it had been around since the fifties, and Eva could see they were doing a decent trade, even though it was nearly three on a Tuesday afternoon and not exactly rush hour.

She parked the van, then sent up a prayer to the universe.

Running water and a pillow, that’s all I need.

The Rebel and the Cowboy is available in the following formats: 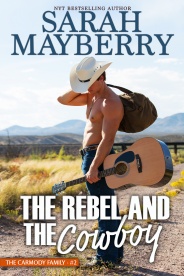 Did you know that The Rebel and the Cowboy and many titles are available digitally from Tule's own bookstore? Check it out!