Can love and sacrifice conquer a curse?

When Felyn was a young, defenseless witch, she was cursed to live as a shape shifter—a deadly panther. She might have been rescued and raised by a noble and powerful leader, but she lives in fear she will hurt those she loves in her animal form so each full moon she hides deep in the forest. But how can she refuse her adoptive father’s plea for an arranged marriage with a new ally? After all, it’s temporary and in name only…

Varz agrees to an arranged marriage reluctantly because he needs the military and diplomatic alliance. He has secrets and a growing power struggle back home. He’s relieved he need only marry the young witch for a year until he meets his bride. Felyn is beautiful and intelligent and not easy to ignore, but Varz is a man of his word. His vow to leave his bride untouched will be the hardest one he has had to keep.

The first full moon of the warm time hung low in the sky. A few birds, eager for day, twittered in the trees. Early night-blooming flowers reluctantly began to fold their treasures.

Then the birds stilled. Even owls headed home with full bellies ceased to hoot. The mice that escaped their talons froze in their tracks, then scurried to their nests.

A panther prowled the forest.

As she neared the clearing, a young rabbit panicked and ran directly across the predator’s path. The panther smelled its blood and tasted the fresh, raw meat in her mind, but let the quivering creature dive into its hole unmolested. Food enough when the sun rose. And she had learned that raw flesh, even from a quick, clean kill, left her feeling sick in mind and body once the moon set.

Shining ebony against the mottled black of the forest, the panther paused at the edge of the clearing and lifted her head to sniff the air. Man!

The slitted green eyes went upward first, to the trees. She had been caught once before from above. This night, no leaf stirred, no shadow breathed in the unfamiliar forest.

Her ears twitched in all directions, but she heard none of the heavy sounds of humans.

Her eyes strained against the darkness, but even as she searched for signs of an intruder her vision began to fade. The acrid human scent settled to a mere disturbance in the air. The sounds around her muffled and buzzed, so she could no longer tell exactly where they came from.

She swung her head from side to side in a gesture no panther would recognize, looking for the man who left his scent on the air, then went to the pile of clothing at the far edge of the clearing. He had touched them, the smell strong enough even for her normal senses. But stale, she realized, as her body began to go languorous and soft. He was no longer here.

In a hurry now, she grasped the clothing in her fine, sharp teeth, tugging it out of the clearing into the brush around it. Her body itched and heaved and trembled as she finally lay down on the soft cloth and gave herself over to the transformation.

The moon set too close to dawn. Felyn was forced to walk openly through the gray light as long as she could. As she neared the edge of the forest’s shelter, she saw him.

A tall young man with black hair and a long, thin face. He was slender, but his open cloak revealed the brawny arms and muscular legs of youth. And a drawn sword in his hand.

She never doubted he was the man who had touched her clothes in the forest. His eyes still searched its depths as he walked toward the camp, looking for her.

If he saw her transformation, he would not think of attacking her alone with no more than that sword. So he only found her clothes. All knew witches performed their rites naked in the forest. Or so they thought. And all knew she was a witch. So the clothes told him nothing.

She considered confronting him, frightening him with a fireball or a small curse. But she decided it would be best if the stranger never knew he had been discovered skulking in the forest before dawn by someone he thought of as an enemy. Better to learn who he was and why he might want to kill her. For that it was she he sought with that drawn sword she had no doubt.

She swirled her hand in the air to make herself invisible, then followed the stranger to where her fate awaited her.

Felyn’s Curse is available in the following formats: 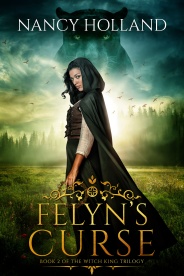 Did you know that Felyn’s Curse and many titles are available digitally from Tule's own bookstore? Check it out!