The Hills of Texas, Book 3 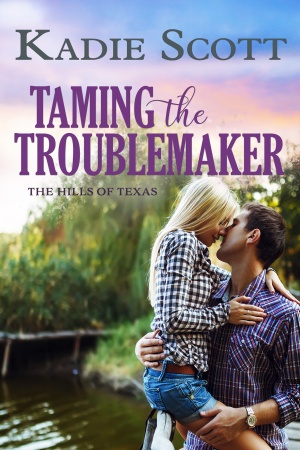 The Hills of Texas, Book 3

One daring kiss with the playboy tempts the good girl, but can she tame him?

Autry Hill may be a cowboy to his boots, but he’s also gained quite the reputation as a charmer and playboy. His parents aren’t sure he’s ready to take the reins of the family’s prosperous Texas ranch, so they set up a challenge: No women or scandal for the next six months and the ranch house he grew up in is his. Easy peasy, Autry thinks. He’s already tired of late nights and romancing, until elementary school teacher Beth Cooper happens to cross his path. Suddenly Autry is losing his heart, his mind, and what’s left of his reputation.

Good girl teacher Beth Cooper is far too practical to fall for Autry Hill, even if she had a crush on him way back when. The man’s been breaking hearts since middle school. But when he becomes her unexpected champion and then they work together to help one of Beth’s troubled students who’s about to lose everything, she sees a different side of Autry – serious, compassionate, determined and dedicated. And that Autry is nearly impossible to resist. Does she need to?

“I have a proposition to put to you.”

Autry Hill glanced up from his breakfast, a forkful of eggs hovering in midair halfway to his mouth, to find his father dropping into the seat across the table.

John Hill didn’t look his age, his hair still dark and thick with only a few grays showing at the temples in recent years. Skin deeply tanned from years working on the ranch only made his eyes appear brighter. The Hill eyes—a striking blue surrounded by a dark rim at the outer edge of the iris that made the color pop even more—were passed down several generations, and well-known in these parts.

Eyes all of Autry’s siblings had inherited. Just not Autry. He’d gotten his mother’s hazel eyes instead. A fact he was vaguely proud of in a silly way left over from high school. Being one of five kids, anything to help you stand out from the crowd was a good thing.

Autry liked to stand out in any crowd.

He glanced around, but his mother, who’d already eaten along with the rest of his family and was working on the breakfast dishes in the sink and humming softly, was the only other person in the room. He was getting a bit of a late start, thanks to a way-too-late night last night. Not his fault. Not that late, either. Darkness still obscured the land outside the windows in the kitchen. Dawn would break soon enough, turning the land gray then hazy pink.

“You have a proposition for me?” he asked.

Autry put his fork down, curiosity rising up like a dog’s ears pricking at a sound. “Okay.”

“Your mother and I have been discussing the future of the ranch.” Just like his dad to not beat around the bush.

Autry straightened in his seat, pricked ears going straight to full alert. This ranch meant more to him than anything else in his life. He lived for the work he did here with his family, was proud of it, and had every intention of growing their already prosperous ranch for the next generations of Hills to come.

“With you kids getting married and having babies of your own, and us not getting any younger, seems like it’s time for a few changes.”

His dad was talking about Autry’s siblings, and his dad was right—their family was growing fast. Cash, after a rough start losing his first wife, had married Holly. They had Sophia, his daughter from that first marriage, and now Holly was expecting twins. Pretty soon, in fact. Will had married Rusty, twice since the first ceremony had been a bit of a rush job. Carter was engaged to Brian, though a date still hadn’t been set for the wedding.

That left only his younger brother, Jennings, only he had his own hang-ups in the love department, and Autry, who’d earned a reputation as the county’s resident bad boy. At least where women were concerned. He’d be the first to admit, he’d sowed more than his fair share of wild oats in his day, but not so much lately.

“What kind of changes?” he prompted.

His dad leaned back in his chair. “Well… it mostly has to do with living situation. Cash and Holly live in town. Will and Rusty are only here half the year, with her ranch in Wyoming. Carter will live with Brian, and Jennings is almost done building the house he’s been working on.”

Which left Autry. Adrenaline had his heart picking up speed. Was his dad about to offer him the main house? He tried to keep his pulse from leaping to conclusions, but this was a big deal. He’d wanted to be the one to inherit the house since he was about five years old.

That was when he’d learned about his dad and Uncle Jeremy, and how they’d split things up, his dad getting the house and Jeremy getting a larger portion of the ranch. His uncle eventually decided to leave the family business and moved to Austin. He still owned his majority but was happy to let his brother manage the full enchilada for a portion of the profits.

Autry loved this house. The memories, the way it smelled of cedar floors, cleaning fluids, and his mother’s cooking. This house was and always would be home base, a place where his soul was settled and happy. Except he was number four of five kids. The odds of his getting it were nil. Until now? Jeremy hadn’t had any kids, which left Autry and his siblings to inherit the full spread and figure out living situations.

“Your mom has her heart set on the Guthrie place, and it recently went up for sale.”

They were talking about the house. Would it be juvenile to pump his fist about now? Probably. Autry managed to stop himself.

“That’s a perfect spot.” He limited his comment and kept his expression serious. “Closer to town for Mom, but still easy driving here for you.”

“And that gorgeous Victorian architecture.” His mother gave a sigh of bliss.

Autry turned in his chair, giving her an affectionate grin. “I didn’t know you were such a romantic when it came to houses, Mom.”

She gave a little sniff. “About that one, I could be.”

“Anyway,” his dad continued, “we haven’t decided yet what we’re doing, but we’re thinking that the homestead should probably go to you.”

Autry couldn’t miss the doubt smothering the fun from all those wonderful words like a wet blanket. He tipped his chair back on two legs, considering his parents. “Probably?”

His mother took the seat beside him, handing him a cup of strong, dark coffee, the pungent scent wafting up to him not helping much with this conversation.

She wrapped her hands around her own steaming mug. “We’re a little… concerned… with your trajectory in life.”

Concerned? Trajectory? “What the hell”—he paused that word at a single raised eyebrow from his father and cleared his throat—“heck does that mean?”

“You need to start taking life more seriously, Son.” His dad laid it out plain. “All the stories we hear about women. It was one thing when you were a teenager, but you’re not anymore.”

Autry snorted. “Ninety percent of those stories are made-up or blown way out of proportion, and I take the ranch damn seriously.”

“Don’t swear in front of your mother.”

The warning would only come once before consequences.

She patted his hand. “What time did you get in last night anyway?”

Autry narrowed his eyes. Evaline Hill was no fool, but this time, she was also way off. “Two. But I wasn’t with a woman.” Not the way they were thinking, at least.

“Where were you?” his dad asked.

Autry crossed his arms and said nothing. Not only had this stopped being anyone’s business except his years ago, but he’d also made a promise. If Michelle’s ex found out, he’d cause problems.

His parents exchanged a glance. “The thing is,” his mom started, “this house is meant for a family. Not a single man, and at the rate you’re going…”

Autry scowled, looking back and forth between them. “Seriously? You want me to get married or something?”

“No.” His mother waved a hand as though dismissing that idea as ridiculous and Autry blew out a pent-up breath. “We don’t want you to marry until you find the right girl.”

“And you’re not going to find her at a bar,” his dad tacked on.

Yeah. He’d also figured that out a while ago. Still, no one else’s business but his. Automatically, he fell back on his trademark grin to cover his growing irritation. “Why not? I’m pretty sure all types of women go to bars.”

“Not the types you hang out with.” His mother patted her graying hair, pulled neatly up in a bun. “So, we have a… deal for you.”

“A deal,” he repeated slowly. Was this seriously happening?

“More of a bet,” his dad clarified.

No fucking way. “You want to bet me the house?”

His dad aimed his own cheeky grin at Autry. “Yup. If you can quit women for six months.”

Autry dropped forward with a thump that made his mother wince. Had he heard that right? “You want me to quit women?”

“That’s right,” his dad confirmed. “No dating, no shenanigans, and definitely no sex. We have a deal worked out that will give you the house, and we’ll move to the Guthrie place.”

His dad went into more details, but Autry only listened with half an ear. Because the rest of his attention was on the fact that he already had this one won.

What his parents didn’t know was that he’d been growing restless the last year or two. The last woman he’d dated, he’d ended it almost six months ago, and hadn’t been in a woman’s bed since. Sure, he’d been on a few more dates here and there, but none that led to anything serious, and definitely not to bed. Not doing that wouldn’t be any kind of hardship.

Six more months would be cake.

The house he’d always loved and grown up in was as good as his.

Taming the Troublemaker is available in the following formats: 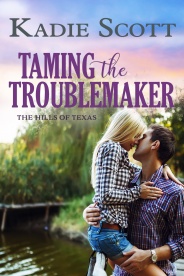 Did you know that Taming the Troublemaker and many titles are available digitally from Tule's own bookstore? Check it out!