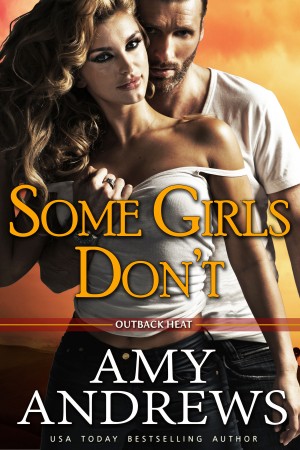 Local television reporter Selena Durrum is in Jumbuck Springs for three days. Get in, see her grandmother, give her speech, and get out. Her career is about to hit big and she can’t afford any distractions. Especially not her childhood sweetheart…

Jarrod Weston, rural firefighter, isn’t worried about seeing the woman who’d done a midnight runner on him fifteen years earlier. It was a long time ago and he’s moved on with his life… right?

But neither of them were ready for their still potent attraction and the heavy pull of unfinished business. But then Selena gets offered the opportunity of a lifetime and once again has to choose between love and career… Will she go with her heart, or her head?

Selena tried to forget where they were going as they rode past the Goodbye from Jumbuck Springs sign. “I can’t believe you still have Rhonda,” she said, trying to distract herself as she looked around the inside. The vehicle had been ten years old when Jarrod had bought it.

“She just keeps going and going. Can’t trade her in. It’d be disloyal.”

Selena rolled her head along the headrest until she was looking at the hard blade of his cheekbone and the square set to his jaw. She didn’t think he was having a dig at her, but she could see the parallel. Jarrod was a loyal guy. She had no doubt in her head that he would have been loyal to her forever.

And that wasn’t nothing in this era of easy divorce.

Lights from the dash illuminated his strong profile and the soft layer of ginger whiskers. She itched to run her fingers over it, feel it prickling against her palm. He’d taken his tie off, undone the top two buttons of his shirt and rolled up his sleeves a long time ago. The light played across the corded muscles of his forearms and the blond hairs.

She could smell his aftershave and breathed it in for old time’s sake.

He glanced at her briefly before looking back at the road. “About last night …”

He glanced at her quickly again. “Yes.”

Selena sighed. Her grandmother was right. She did owe him an explanation for running out on him like that, without saying goodbye. The real explanation, not the fake ‘sudden opportunity in the city’ Grandy had been left to dish out.

It had been a shitty thing to do then and not trying to give him an honest explanation now would be even shittier.

The sign to Hobson’s Crossing approached, and he slowed the dual cab down. “You returned all my letters,” he said as he turned off the bitumen onto gravel.

Selena looked out the window as the landscape changed from stubbly paddocks to gum trees and bush, the headlights illuminating the powdery dust and the rutted corrugations of the dirt road.

“I had to go cold turkey, Jarrod,” she said, turning her head to face him again. His knuckles tightened around the steering wheel. “It was always all or nothing with us.”

He slowed the car as it dipped down to the narrow cement crossing that divided Hobson’s Creek in two. The creek was one of the many watercourses that were fed by the springs about an hour’s drive further west and after which Jumbuck Springs was named. When it rained enough, the water would flood over the cement causeway.

But from what Selena could tell from the flash of moonlight on water as they passed, they were in no danger of that.

“I don’t remember the creek ever being that low,” she mused.

“Jarrod?” she said as he drove straight by. “Where are you going?” It was a rhetorical question.

She knew where he was heading.

“We’re so close,” he said, his eyes fixed on the road. “Aren’t you curious to see the old hangout?”

Their own private lovers’ lane? She shouldn’t be, but now she was here she could feel the tug of curiosity. Maybe it was the moonlight. Or the stars. Or the memories being stirred by just sitting next to him in Rhonda.

“Can you still find the track?” she asked.

He threw her his best boy scout look. “A man never forgets where he lost his virginity.”

Jarrod had stumbled across the thick stand of trees, just off the road, when he’d been surveying for the fire service, and they’d snuck out to it whenever they’d been able. But it had been fifteen years. Surely it must have fallen back to the inexorable creep of bush?

Unless … “Did you ever bring anyone else out here?”

He glanced at her swiftly, his brow crinkled as he shook his head definitively. “Never.”

A sweet swell of relief washed through her system. Selena didn’t have any right to demand this place be theirs exclusively but she couldn’t deny how happy it made her that it was.

Soon enough, Jarrod was taking the dual cab bush and they bumped along slowly through the undergrowth for a few minutes before the headlights picked out the ghostly outlines of tall thick trunks ahead.

“Yeah, yeah.” She rolled her eyes.

Within another minute he was wheeling the car around, positioning it within the horseshoe embrace of the trees, completely invisible to anyone passing by on the road to the springs.

Not that anyone would be at this hour of night.

He released his seatbelt then hit a switch, rolling both their windows down before he killed the engine. The moonlight projected overhanging leafy shadows against the windscreen as the smell of eucalyptus, warm bushland and dry earth joined the aroma of Jarrod’s aftershave.

She inhaled deeply and she was seventeen again.

Her pulse fluttered at her wrists and temple, joining a more primal flutter deep inside her. The hush of the night pressed in on them.

“I am sorry,” she said, removing her seatbelt, staring out the windscreen as the silence stretched, conscious of him looking out his window at God knew what. “About just taking off like that.”

He didn’t say anything, just gripped the steering wheel at the bottom and continued to stare out his window. Selena’s heart thudded loud in her chest. “I realise I never told you that, and I should have. Years ago. I was going to write, but then I didn’t know what to say, and when I did try, it seemed inadequate. I don’t know how many pages I screwed up and—”

She stopped. Shit, Selena, shut up. She was babbling.

But he wasn’t saying anything and she couldn’t bear the condemnation in his silence.

“Then time went by and I promised myself next week, next month or for Easter or Christmas until it just got too … late to do it. And then I figured it was better that you hated me anyway.”

His knuckles whitened on the wheel as he turned his head to face her. “What on earth did I ever do to you to make you think I wasn’t supportive of you moving to the city?”

Selena shook her head. “Nothing.”

“I knew you were leaving to go to college in February,” he said, his jaw tight. “I was fine with that. Well … I hated it, but I knew we’d figure it out. I knew you wanted a career in TV news and I wanted that for you as well. So I don’t understand why you just took off in the dead of night without a goodbye, a note, a phone call … nothing. Why didn’t you just tell me you were going?”

Because she wouldn’t have gone.

Hot tears pricked at the backs of her eyes but Selena refused to let them fall—she’d cried enough back then for both of them. She’d been running scared—terrified—and every action had felt justified at the time, but she’d hurt him and she had to own that.

“I got my exam results that day. I just scraped through with passes.”

Selena had been a straight-A student. She’d worked hard for them; she wasn’t naturally gifted but she’d always topped her classes. Until she and Jarrod had started having sex.

And they’d both lost about a hundred IQ points.

“Crap. I’m sorry, I didn’t know. I guess there wasn’t …” a small smile touched his lips, “a whole lot of studying going on there for a while.”

That was an understatement. She’d spent a lot of time studying with Jarrod, but not the kind her grandmother or Jarrod’s mother thought they were doing in his bedroom or at the library or at any number of friend’s places they’d lied about to sneak off to this very place.

Had they been required to sit an exam on the male/female reproductive system, that they would have passed with flying colours.

“But your other results for the year would have almost cancelled them out.”

Yes. Overall she’d still come out with a B average. But that had just been one of the whammies she’d been dealing with.

“There’s something else.” She dragged her gaze from his and stared out her window. She couldn’t look at him when she told him the truth. “I missed a period, Jarrod.”

Some Girls Don’t is currently available in digital format only: 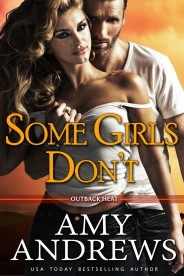 Did you know that Some Girls Don’t and many titles are available digitally from Tule's own bookstore? Check it out!