It’s 2006, and Delia Mulcahy is living in a shabby apartment and facing crushing student debt. Suddenly, she’s plucked from obscurity to work for Wall Street’s top hedge fund. Determined to make her millions, Delia must master the cutthroat world of big-stakes trading and profit off of the cataclysm of the looming crash.

In the underbelly of finance, no one is who they say they are. Delia finds herself embroiled in devious schemes and duplicitous deals as her recklessness threatens every relationship in her life: family, friends and especially the two rival CEOs vying for her genius.

It’s a high-risk game and she is a better player than most. When her soul is on the line, how much is enough for her greedy heart?

Morning sunbeams poked through my blind slats. The rays were long and warm like yellow fingers, touching my shoulder as I straddled my “boyfriend,” Eric (quotes stet).

“God,” Eric said, thrusting slowly. “It only gets better with you.”

For me, not so much. Sex with him had lost what made it so special: that impersonal, transactional quality.

Our first encounter, Eric hinged me forward over a desk, pulled up the back of my dress and spread my legs with his knee. Next, we did it against a campus palm on a moonlit night. Then on the couch in his office. Our relationship started to develop a great rhythm: rendezvous, screw, carry on.

Now he was spending the night. He was leaving a change of clothes. He was resting his hand at the small of my back. The implication was clear. I was transforming into a girlfriend, someone he might even want to marry. Have kids for him. Make sacrifices for him. Move for his career. He was planning to fuck me all right, just in a different way.

But I wasn’t after love or a relationship. My goal was money.

“Oh, baby,” he groaned, as the dawn stretched into the corners of the cave-dark Florida apartment. His hands tightened on my waist. My cell phone’s screen animated, flashing and glowing. I glanced to see the caller.

In a single sweep of my leg, courtesy of equitation lessons from back in my finishing school days, I dismounted Eric’s cock and grabbed the phone.

The recruiter got right to his purpose. I was being considered for a position as a “quant.” He schpeeled off phrases: absolute return, trading techniques, assets under management and shorting.

“You said you were from…?” It was too much to believe. I sat up on the edge of the bed while Eric stroked his dick to finish himself off.

“Odyssey Capital,” he said. “We’re rated number-one in Barron’s based on performance.” As if I didn’t know. As if Odyssey wasn’t legendary.

Somehow they were calling me? I was not a Stanford-minted PhD. I was scratching out my dissertation at a third-tier school in central Florida, making $25,000 a year as an adjunct with a hundred grand in student loan debt, living in a crappy apartment with powdery sheetrock and moldy bathroom tiles. So far, my best job offer was from an automated calling center in Minneapolis.

Odyssey was, to use my mother’s term, crème de la crème. Its founder, the inscrutable, young Peter Priest, sat in the pantheon of new hedge-fund gods. Today, in 2006, the people at these hedge funds raked in millions, tens of millions, even hundreds of millions. It was a level of wealth few people could imagine. I could imagine it—I who was born in a modern-day castle. Of course, that was before The Great Family Financial Disaster of 1986. That was when wealth, family, love, future hopes—all of it went out the window. In one case, pretty much literally. I spent twenty years in exile. Now Odyssey was materializing like a rainbow out of the clouds—the kind of rainbow attached to a pot of gold.

“We have a very good research department, Ms. Mulcahy.”

“Researching what?” I was a nobody with nothing to my name. These days, anyway.

Tuesday was the day after tomorrow and my last interview with Telefony, the call-center company offering me a six-figure salary. It was a lot of money to me, though nothing in comparison to what I once lost. The Telefony technology replaced humans with automated systems that said, “If you are calling about an existing reservation, say ‘existing reservation.’” They were hiring comp-sci PhDs to trick out their artificial intelligence algorithms, bringing the firm to the next level. They had a plan to replace the 911 operator.

The $150,000 offer was practically in the bag. My almost-employer was talking to me about options and an eventual IPO. If they went public in a few years, I could cash out for half a million. These numbers represented a fortune just yesterday. There was only this last interview, with the twenty-nine-year-old founder, a guy six years younger than I was. The Telefony HR woman told me my offer would come at the end of the Skype.

The Odyssey recruiter continued to give me instructions over the tinny cell phone connection. “You’ll need to stay through Thursday in case there’s follow-up or negotiations,” he said. “Though you may be finished on Tuesday,” he concluded ominously.

A bird in the hand, whispered Aunt Kathleen. But your aphorisms don’t get listened to when you jump off a roof and land in a fountain in the garden.

“Of course. Simply submit the Odyssey expense report when you return.”

Great!—except my credit cards were maxed out. I told him I was a libertarian who didn’t believe in credit cards, so I needed him to wire the anticipated expense funds to my checking account. He agreed. No doubt because three grand was a rounding error for him. Then I phoned my mother whom I hadn’t called, much less seen, in five years. I needed to stay at her house, so I could pocket the cash from Odyssey. I would fake all my receipts.

“You won’t get another opportunity like this.” Eric slouched to my bathroom with its poorly laid floor tiles that petered out at the corners into exhausted rhombuses and trapezoids. Eric was right. By now, 2006, hordes of programmers were specializing in exactly the kind of math Wall Street wanted. I’d started on the path too late. My credentials didn’t attract even one Wall Street interview. Yet, suddenly and inexplicably, here was Odyssey, appearing out of nowhere like a fairy godmother with an invitation to the high-finance ball. This was real money, not some lousy hundred-fifty kay. It was the kind of money that might even reconstitute a lost fortune. I would need to go back to the scene of a crime that destroyed my life before it had a chance to begin. It meant jeopardizing a certain future and certain money. Could I possibly land the Odyssey job?

I booked my plane tickets and told Eric to drive me to the airport the next day. I lied to the Telefony HR woman that my mother, to whom I was devoted, was scheduled for emergency surgery on Tuesday. I was flying to New York and would not make the Skype. She seemed to have heard this story before and said while my situation was regrettable, the job market was competitive, and if I missed the interview, they would make an offer to another candidate.

Two in the bush.

Greedy Heart is currently available in digital format only: 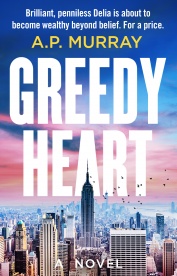 Did you know that Greedy Heart and many titles are available digitally from Tule's own bookstore? Check it out!